Julian Erosa Is Starting To Feel Settled In

With Four Wins In His Last Five Fights, Julian Erosa Can Feel Everything Clicking Into Place.
By Thomas Gerbasi, on Twitter @tgerbasi • Feb. 4, 2022

Long before the bright lights of the UFC beckoned, Julian Erosa just liked to fight.

“I never really worried about tomorrow,” said Erosa of the days before his first pro fight in October 2010. “I'm always kind of a here and now person and so, for me, it was just something I enjoyed doing.”

But after ten amateur fights on the tough Pacific Northwest fight scene, the Seattle native was interested in seeing what it was like to get paid to do what he loved.

“I was so stoked because it was like $400 and $400, with some food vouchers and a hotel for a couple of nights,” he laughs. “At that point, it was more of a cherry on top getting paid to do it. I was just having fun. I really enjoyed the competitive nature of it. I was basically a hobbyist, but I was serious about it.”

Then along came Angel Diaz, who would be across from the 21-year-old at the Cagesport 12 event at the Emerald Queen Casino in Tacoma. 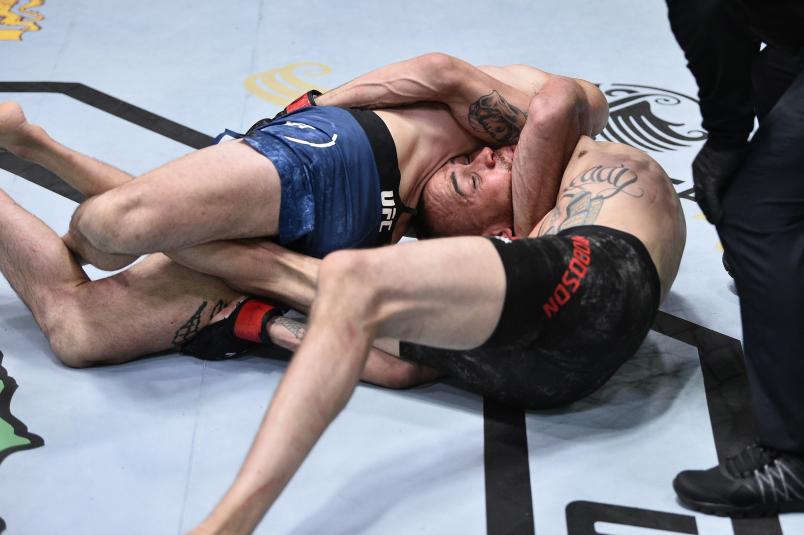 Julian Erosa secures a d'arce choke against Sean Woodson in their fight during the UFC Fight Night event at UFC APEX on June 27, 2020 in Las Vegas, Nevada. (Photo by Chris Unger/Zuffa LLC)

“He was a really stout kid,” recalled Erosa. “We fought at '55 I think and I was walking like six or seven pounds heavier than that, but I didn't look it. I was a tall, skinny, scared kid and he was a Mexican kid with a lot of tattoos, he was buff, and he looked intimidating.”

Welcome to the pros.

“Luckily, I was able to see things pretty clearly in the fight,” he said. “I was pretty easygoing, fun and didn't really care about much, so it was kind of easy for me to turn all that outside stuff off and just get in there and focus on the task at hand. I saw a couple openings and was able to capitalize on those.”

Already hooked, Erosa kept winning, and seven or eight fights in, he came to the realization that this might be more than just something fun to do. By 2015, he was on The Ultimate Fighter, and while there have been some ups and downs in the ensuing years, as 2022 dawns, Erosa is in the UFC and on a nice run where he’s won four of his last five bouts, three in the Octagon. And though he was good back in 2010, he finally feels like everything is clicking. 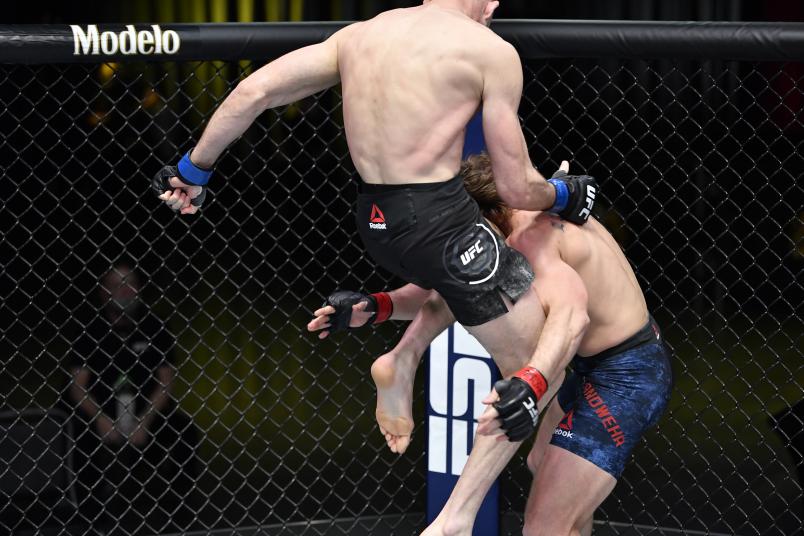 Julian Erosa lands a flying knee against Nate Landwehr in a featherweight bout during the UFC Fight Night event at UFC APEX on February 20, 2021 in Las Vegas, Nevada. (Photo by Chris Unger/Zuffa LLC)

“I feel settled into my abilities and being able to perform when I need to,” he said. “I've come into my own and I feel that my experience and my athleticism have come together and right now where I’m at with my age, I feel like I'm in the prime and I'm really starting to make a path for myself and starting to settle into the UFC.”

On Saturday, the 32-year-old faces another seasoned competitor in 28-fight vet Steven Peterson. It’s a good switch up for Erosa, who has been specializing in facing young guns like Charles Jourdain and Grant Dawson over the last few years.

“When I fought Jourdain in my last fight, I took it on short notice, but regardless of that point, I wasn't gonna let somebody with such little experience compared to me beat me,” he said. “There's no way I could let this young kid come in here and beat me. There's no way I can let that happen. He just doesn't have the type of experience and the type of hours that I put in the gym. It wasn't that I was trying to spoil the night; I just wasn't gonna let the young buck come in and take what I've worked for way longer than he has. That’s not to take anything from Jourdain. He's put a lot of work in, but there's only so much you can do in a certain amount of time, and I know I've been doing this for a long time and putting the hours in and that I deserved to win that fight.”

Erosa submitted Jourdain in third round last September, making it five finishes in his last five wins. Next up is Peterson. 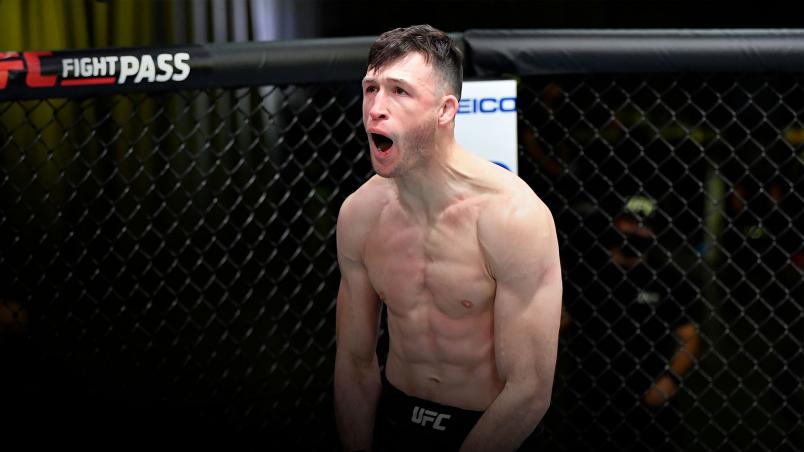 “Peterson is closer to my experience, and he's probably been brought up in the same kind of era of fighting where you put your head down, work hard, show up to the gym every day and put the hours in and you reap the benefits of that,” Erosa said. “It will be fun in that sense because I think there's a little bit of that respect and that camaraderie when you're dealing with someone that's your age and kinda coming up in the same era, as well.”

Experience is just a word, though, unless a fighter uses that Octagon time and years in the gym wisely. And in addition to feeling that he’s reached his prime at the perfect time, Erosa has adjusted his camps accordingly.

“I try to be someone who learns every single day,” he said. “I try to really put new things in, and I've also tried to be more selfish with my training, which has helped me tremendously because specific training is good for your specific opponent.”

“Tune out all the outside stuff,” said Erosa of those formative years. He has. And look where he is now.