From The Ultimate Fighter to the UFC to Contender Series to short notice fights, Julian Erosa has never given up on himself. On June 27, 2020 those efforts paid off.
By Thomas Gerbasi, on Twitter: @TGerbasi • Jul. 3, 2020

This is what 2015 should have felt like for Julian Erosa.

Back then, Erosa was fresh off a run to the semifinals on The Ultimate Fighter 22 and had just picked up his first UFC victory over Marcin Wrzosek on the season finale card. It wasn’t spectacular, but it was a win for the Seattle native and he was settling in for a long run in the big show.

That didn’t happen. Instead, Erosa was cut after a knockout loss to Teruto Ishihara, went 6-2 on the regional circuit, got another UFC deal courtesy of a 2018 win over Jamall Emmers, then got cut again after three straight Octagon losses. Then it was back to the regional circuit for what Erosa assumed was the rest of his career.

“The UFC's still not out of the question,” said House. 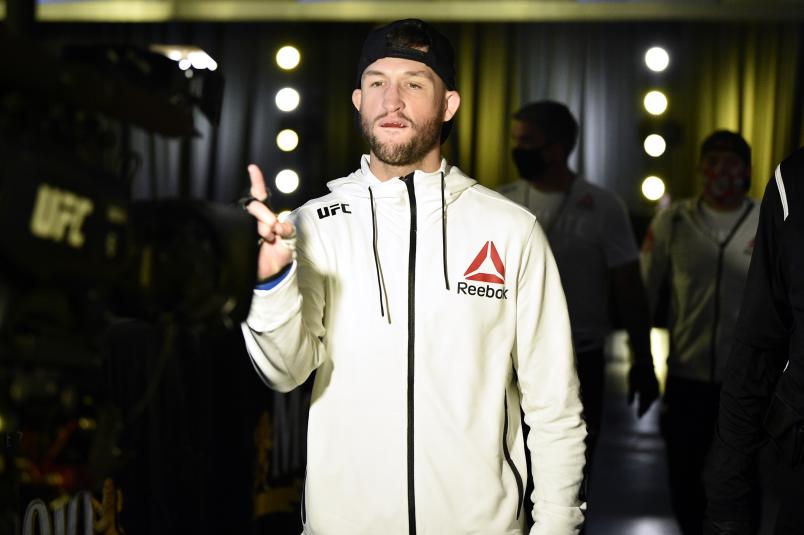 Julian Erosa prepares to fight Sean Woodson in their fight during the UFC Fight Night event at UFC APEX on June 27, 2020 in Las Vegas, Nevada. (Photo by Chris Unger/Zuffa LLC)

“I would never tell you something that I didn't truly believe,” House countered, and Erosa got back to business, submitting AJ Bryant in less than a round in a CageSport bout in February.

He was set to go for CageSport again in May when the COVID-19 pandemic hit. Yet he stayed in shape, ready to go if needed.

“I keep myself in shape, I keep my weight down, I keep everything on point throughout the year, whether I have a fight or not, so I knew if the opportunity presented itself that I'd be ready to step up.”

On Tuesday, June 23, the opportunity presented itself. A return to the UFC to face unbeaten Sean Woodson. That was the good news. The bad news? The fight was in four days. That didn’t matter to Erosa, who put on the performance of a lifetime in submitting Woodson in the third round. It was 2015 all over again, and the 30-year-old was embraced by the MMA world following the Performance of the Night win.

“It's crazy what 15 minutes can do for you,” Erosa said. “I went from being one of the laughingstocks of the UFC to being one of the most liked guys right now. Tuesday, I got the call and Saturday my life changed for the better, and I'm just amazingly blessed for that to happen.”

It was the fight game at its finest, when most of the time it can be so unforgiving. No one knows this better than Erosa, a 23-8 pro who can obviously fight, but who just didn’t get it done on the big stage until last Saturday night.

“This fight game can be so brutal,” Erosa said. “It's been such a long and up and down road. And if you base everything off just how you do in the UFC, it can be a depressing sport to be in. But it's never made me waver. I've always been headstrong about it and I knew that if I just kept working that somehow, some way, some day, I was gonna be acknowledged for all the hard work that I put in. All my training partners, all my coaches, my friends and family, they know the work that I put into this, but it's all the other people that don't get to see that other stuff. I've only wanted to have the opportunity to be able to showcase myself in the same kind of light that all my friends and family get to see, and all my training partners and coaches as well. This past Saturday I felt like I was able to do that, and I'm just so satisfied with how it turned out for myself.”

Towards the end of the first round against Woodson, it was clear that this was a different Julian Erosa at the APEX in Las Vegas. Woodson got off to a fast start, using his range and boxing ability beautifully as he tagged Erosa and marked his face up. But with each shot, Erosa had a look on his face that said, “You can’t hurt me and I will outlast you.” He was right, and on this night, the veteran was not going to be denied.

“There's a little bit of a switch in my head and that happens sometimes, especially when I'm sparring,” he said. “Usually when we spar at Xtreme (Couture), we go about five or six rounds. Usually around the middle of the third round, I'll start catching this switch where I feel like everybody's starting to fade. I don't like to fade and I never fade; I've always been really proud of my cardio and my conditioning and so I always try to be a pressure fighter and have the switch where I go from having fun to doing everything I can to not let this guy do what he wants. Sometimes in fights it's taken me too long to do that and it's too little too late or I didn't do it and I got knocked out because I was being too relaxed in the beginning of the fight.”

Not on this night. In fact, Erosa was hitting on all cylinders mentally and physically while hitting pads in the locker room.

“I’m thinking, ‘There's nothing that this kid's gonna do to me, he's gonna have to put me out,’” Erosa recalled. “Nothing was gonna stop me from getting what I wanted that night.”

In round three, Erosa got what he wanted, with a D’Arce choke ending matters at the 2:44 mark. Erosa got his second UFC win and a fresh start. The internet did the rest, with Erosa getting praised by fans, media and his peers. It’s not the first time a veteran came back to the UFC and scored a big win, but this one resonated for some reason.

“Obviously, this pandemic is kind of a situational thing so there's no other sports on TV so I'm getting more recognition because of that,” said Erosa.

“I think I have a likable personality, but also maybe a likable fight style,” Erosa said. “The last fight showcased what I'm about. I'm willing to go to the end of the Earth to get what I want and put it all on the line, and a lot of other fighters can really respect that. When people see that kind of stuff, they get inspired.”