The "Raging Panda" got the long-awaited call to fight in the UFC, and whether or not she finds her way to a title shot, Julia Avila feels like she is already a champion.
Jul. 4, 2019

It’s the first law of writing: never read the comments section. For professional fighters, amp that law up tenfold. But Julia Avila doesn’t do things the way everyone else does. So when it was announced that she had signed a UFC contract, she hit the world wide web to see what fans were saying.

“There were a couple of really nasty comments,” she laughs before reciting some of the more interesting ones. Suffice to say, it was the usual nonsense spewed by those writing behind the safety of their keyboard, but Avila didn’t let any of it break her.

“For every one person that was bashing me, another was saying really good things about my fighting style or my accolades,” said the highly-touted bantamweight, who faces Pannie Kianzad this Saturday in Las Vegas. “There’s gonna be haters out there, and it does hurt, I’m not gonna say that it doesn’t, but if I can change one person’s mind, then it’s all worthwhile.”

Given a 6-1 pro record that includes wins over Marion Reneau and former UFC flyweight champion Nicco Montano, Oklahoma City’s Avila shouldn’t have to convince anyone about what she brings to the Octagon, but even if there are skeptics, she’s fine with making her case to them this weekend and beyond. And frankly, that’s why she’s here.

“The only reason I fight is to have that connection with people,” she said. “I love connecting on such a personal basis and I love being an integral part in people’s lives, as well as they are in mine. I don’t think people realize that, but I read all of their comments, I respond and I do my best to be a friend and not just be a fighter, but a role model for people. This is the platform I have found where I’m able to be a positive role model. So that’s the goal – to be relatable and for people to follow me and to want to watch me and want to watch me succeed because they’re invested. I want that connection with the audience.”

Avila goes by the moniker “Raging Panda,” but with comments like those, she may as well change her nickname to “The Unicorn.” But all kidding aside, she’s right, because the fighters people cheer for aren’t necessarily the best fighters. They’re the ones folks have an emotional connection to, either positively or negatively. Avila is all about the positive connection, and given her personality and fighting skill, she’s going to have more than her share of fans in her corner.

That’s satisfying, especially now, because there was a time when she didn’t know if she was going to get a call from the UFC.

“There was a while there when I thought it wouldn’t happen, a while there when I thought I wasn’t good enough or not pretty enough or not marketable,” she admits. “But then certain things will happen in my life where I’m making a difference. So there was a time when I wasn’t getting a call, then this little girl came up to me and said, ‘Hey Miss Julia, I’m gonna dress up as you for Halloween.’ Who gets that? These kids are looking up to me and I’m making a difference in their life. That’s why I got into this, to make a difference. So I get reminded all the time that I’m not doing this for me. I was really excited when it finally happened because I know that I can make a bigger impact. Things happen for a reason and hopefully my best years aren’t behind me and I’m gonna try to make some noise out there.”

At 31, Avila certainly has plenty of time to take care of business in the UFC, and if her last two knockout wins in 2018 are any indication, her rise to the top may come sooner rather than later.

“I need to see this through,” she said. “I’ve got a couple more years left in me, at least five.”

As for the belt?

“That would be nice, but it doesn’t define me as a person. I’m already a champion. I’m great. I don’t need a title to be able to say that. As long as I’m a good person and I’m true to myself and my values, I’ve already won. This is just a test. Going out there and testing my abilities against someone else’s? That’s just fun.”

And hey, it gets her out from behind the desk back home, where she works as a Geological Technician for a major oil & gas company. But after all this talk of fighting for other people in order to be a role model, what does she get out of this? 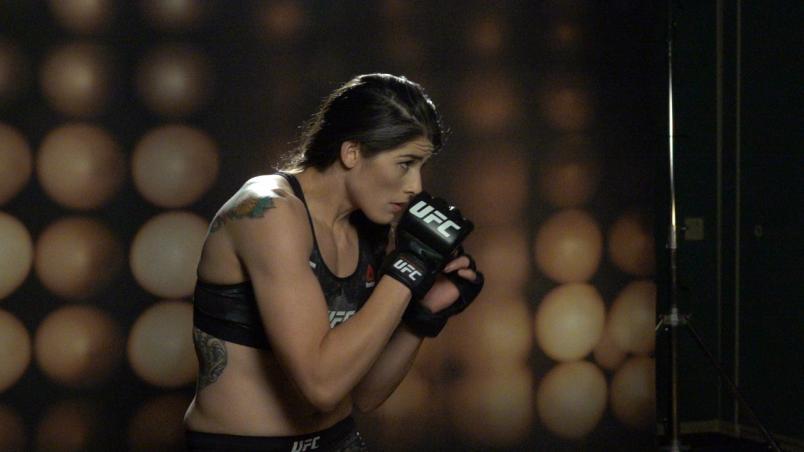 “There’s just something so raw and primitive and it just feeds into my very basic nature of myself,” she said. “I really get to harness that and not a lot of people get to touch upon that and that’s kind of a shame. I’m a fighter, I’m a warrior, I would have been the one in the village to go out and fight alongside the men. It’s cool to be able to touch in on that. You can’t really do that behind a desk plugging away on spreadsheets.”

This is true, and on Saturday, she gets to tap in to that side of her once more. And while it is in the biggest show in the world, Avila isn’t letting that get to her. Hey, she survived internet trolls, right?

“It’s just another fight,” she said. “This fight doesn’t define me, but it’s gonna set the precedent for my career. I’m just gonna go out there and be me – be a raging panda, be primitive, be savage.”