The Juggernaut Prepares to Smash His Way Back to Contention

"My last fight was so unsettling and frustrating that, in a way, it made
everything I did before that fight not matter. It felt as if it was
erased. Now it feels as if I’m starting over" - Jake Ellenberger 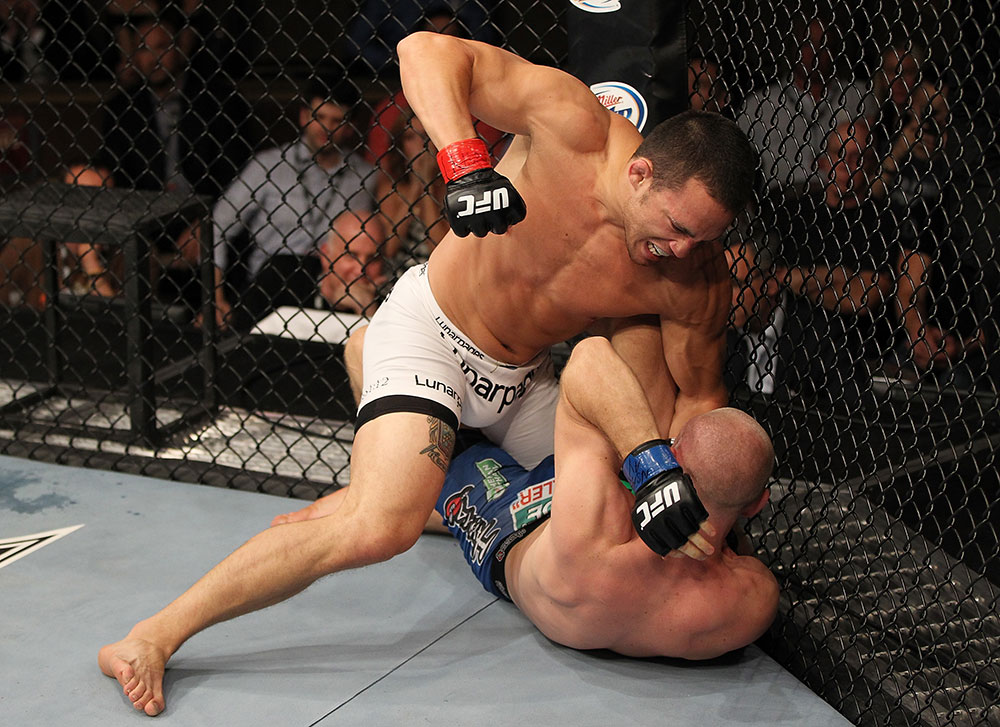 The thrill of victory is the ultimate motivator for an athlete, but there are times when an unsettling defeat can fuel the fires of determination to new levels. This is the position UFC welterweight Jake Ellenberger currently finds himself in and “The Juggernaut” is eager to return to the win column.

The Omaha native battled his way to the upper tier of his division on the strength of a six fight win streak. Following his unanimous decision victory over Diego Sanchez, Ellenberger appeared to be at the helm of the rising tide as he moved within striking distance of a title shot. But that momentum came to a halt after he suffered a loss at the hands of fellow contender Martin Kampmann in June.

The defeat to “The Hitman” threatened to reshuffle Ellenberger in the competitive deck of the 170-pound weight class, but rather than allow himself to tread in the waters of an opportunity lost, he used the experience to propel forward on the quest for self-growth.

It is a journey which has remained the foundation of his very career and Ellenberger is excited to display his reinvigorated passion and progression.

“I’m hungrier now more than ever,” Ellenberger said. “I had some early success in the UFC but this last bump in the road has only made me realize how bad I want this and just how much I want to succeed. My last fight was so unsettling and frustrating that, in a way, it made everything I did before that fight not matter. It felt as if it was erased. Now it feels as if I’m starting over.

“In a way it feels as if my back is against the wall coming off a loss, and I have to reset and refocus. You have to put that behind you and realize this is MMA and anything can happen. I’ve definitely worked on my patience and not being reckless.  I’m extremely focused, disciplined and there’s nothing I want more.”

Throughout his career, the Marine Corps veteran has learned to adapt to the changes which come with the fight game. While originally slated to face welterweight bad boy Josh Koscheck, an injury forced the former contender out of the bout and the UFC tapped veteran Jay Hieron to step in.

Then the two men were set to square off in Las Vegas at UFC 151, but the card’s cancellation pushed the matchup to Minneapolis for UFC on FX 5.  It will be a rematch from a previous meeting under the now defunct IFL banner. In that bout, Hieron emerged victorious by way of unanimous decision and handed a young Ellenberger the first loss of his professional career. It is a favor he plans on returning on Saturday night.

The co-main event bout will also mark Hieron’s first step inside the Octagon since 2007. While “The Thoroughbred” has kept busy in other promotions, Ellenberger has surged on the sport’s biggest stage against some of the world’s best. Ellenberger isn’t necessarily convinced this issue will factor into the fight, but make no mistake about it; a fight is what he intends to bring.

“I would like to think the level of competition I’ve been facing will be a factor in this fight, but at the same time I can’t really say it will,” Ellenberger said. “I’ve definitely been facing better competition in my opinion, but he’s still a dangerous guy. I can’t look past that at all. I’ve seen a lot of his fights and there were a few that were controversial decisions, but he’s still done very well. I can’t overlook that.

“It is weird how things work out. When Jay was signed on for the fight it was kind of surprising to me, but we don’t choose who we fight. At this level everyone is tough and there are no easy fights. Jay is really similar to Koscheck in a lot of ways. He is athletic, a good wrestler and has solid striking. He is pretty good everywhere, but my focus is on where I’m confident. I have to go in there with him again and prove that I’m the best. He’s just another guy I have to face.

“I’m coming into this fight a lot more focused and disciplined. I’m constantly improving and I’m looking to make this into a fight. I think it’s a good matchup for me and not a good fight for his welcome back to the UFC.”

With a strong test directly in front of him, Ellenberger’s focus is laser sharp. He understands the dividends of victory and the consequences of defeat. But despite the pressures which come from fighting at the sport’s highest level, what matters most to Ellenberger is his ability to grow as a mixed martial artist. It is what he believes will bring him to his ultimate goal of one day holding championship gold.

“My focus has never really been on my opponent,” Ellenberger said. “It has been on my progression and quest for improvement. That may sound a bit selfish, but to be successful you almost have to be. There are a lot of things I know well but at the same time there are things I have yet to learn. I’m not oblivious to that at all.

“When you are an extremely competitive athlete, the quest for self-improvement is never ending. You are always asking questions and looking to improve in every aspect possible. You can never stop learning. I’m very happy, but at the same time I’m not content. There are still a lot of unsettled feelings and things I want to get better at. I really want to make a statement.

“One thing I’ve always strived to do is be really confident in my strengths and what I’m good at. I’ve always believed if I could optimize what I’m really good at, it will keep me successful. I’m still fighting for one reason and that’s to become the world champion. That’s it. If I continue to focus on my strengths and use more discipline, I believe I can reach that goal.”