JP Buys Is Set To Make His UFC Debut Alongside His Wife Cheyanne At UFC Fight Night: Brunson vs Holland. Don't Miss UFC Vegas 22 This Saturday
By McKenzie Pavacich, on Twitter @mpavacich_ • Mar. 17, 2021

Nearly a decade ago, when JP Buys entered the world of combat sports in an effort to improve his rugby play, he had no idea that the decision to take a few wrestling lessons would change the course of his life.

Describing himself as a goals-driven individual, Buys has always aimed high. It all started with the pursuit of the dream of “every South African kid” -- to become a professional rugby player. Then, after stumbling upon the concept of having complete control of an outcome in an individual sport, the goal changed to becoming an Olympic wrestling champion

“I think if I was born and raised, or if I was able to emigrate to the United States younger in my life, I would have probably still pursued the career of becoming an Olympic champion, but the opportunities [for wrestling] in South Africa are very limited,” Buys explained. 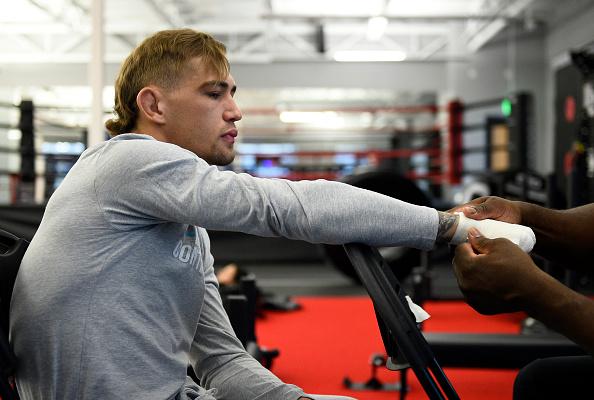 The South African was committed enough to his dream to drop out of school at the age of 17 to pursue training full-time -- another decision that led to even further opportunity when old wrestling teammates convinced him to give mixed martial arts a try.

A few training sessions led to a few fights in the South African circuit, and then, as Buys said, “the rest is history.”

The flyweight now reports a 4-0 amateur record in addition to his 9-2 professional record, which includes two showings on Dana White’s Contender Series, one of which earned him his big break with a UFC contract.

But it wasn’t without failure, as Buys’s first showing inside of the Octagon ended inside of eight minutes when he was submitted by Joby Sanchez in the inaugural run of the Contender Series. Three years and some big life changes later, Buys found himself with his hand raised and a contract waiting for him.

The biggest change? Meeting his wife.

“Before that first loss, I had a bad weight cut to 125. I messed that up on myself, it’s no one else’s fault,” Buys recalled of his 2017 showing on Contender Series. At the advice of his coaches and teammates following the loss, he made the move up to bantamweight in order to focus less on weight cutting and more on his technique.

“I went on a four-fight winning streak in the bantamweight division and, in that time, I met my wife. She made me more professional, taught me to eat better, live better, and she just taught me the ways.”

What made Cheyanne Buys so special wasn’t some magic twist of fate, but simply the fact that she understood JP in the most important way possible: as a fighter.

By now you might be scratching your head trying to figure out why the name sounds so familiar; and that’s because if you’ve looked at the fight card for UFC Fight Night: Brunson vs. Holland at any point since it was announced, you’ll also find Cheyanne Buys on the card, as she opens the main card against Montserrat Conejo.

It’s just the second time in UFC history that both parties in a marriage are due to fight on the same card. But unlike when Mark and Montana De La Rosa shared the spotlight at UFC Rio Rancho last February, both JP and Cheyanne will both be making their proper UFC debuts.

“For her and I it doesn’t really change anything,” Buys explained. “All we do is train all day every day… even if one of us isn’t fighting, we train all of the sessions together. We’re each other's training partners all the time, for every session, so it doesn’t really change anything if one of us is fighting or both of us is.”

To make matters even more unique, the two will be cornering each other, with Cheyanne coaching JP in the second fight on the prelim card, and JP stepping in to support Cheyanne in her bout before the co-main event.

Marital details aside, the two UFC newcomers are both prepared to put their current win streaks on the line, with JP facing Brazilian Bruno Silva in his second bout back at flyweight. But win streaks and records of his past are something Buys said he doesn’t concern himself with. 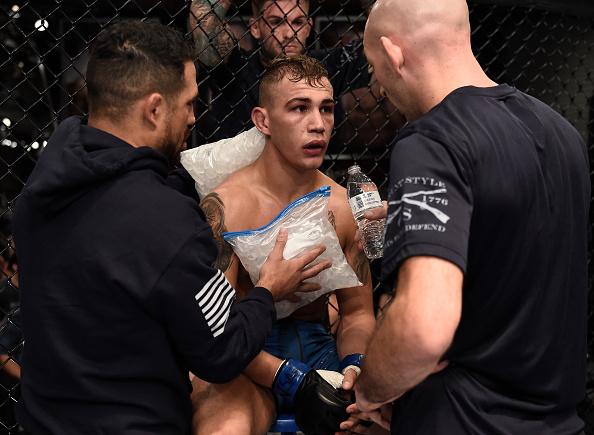 JP Buys of South Africa sits in his corner between rounds of his flyweight bout against Joby Sanchez during Dana White's Tuesday Night Contender Series at the TUF Gym on August 22, 2017 in Las Vegas, Nevada. (Photo by Brandon Magnus/DWTNCS)

“Realistically, nothing really matters. The past win streak, nothing matters,” he explained. “I have a pro record now of 9-2, but realistically, people are only going to start speaking of my record in the UFC. It’s kind of like a restart now, it’s actually restarting my career now. There will probably be some stress, but right now I’m really calm.”

Buys compared the jump to the UFC to graduating high school and heading to college. In his freshman year, Buys already has is eyes set on bigger goals, yet again.