Returning To Bantamweight, JP Buys Believes The Best Is Yet To Come In His Career
By Thomas Gerbasi, on Twitter: @TGerbasi • Sep. 15, 2021

In the fight game, it’s essential to have a short memory.

If you win big and keep thinking about it, you can get too cocky and lose your next one. If you lose big, dwell too much on it and one loss can turn into two, into three, into four.

JP Buys knows the benefits of having a short memory, but he is also aware that there are pitfalls to it as well.

For proof, let’s start in 2017, when he got a call to fight Joby Sanchez on season one of Dana White’s Contender Series. Buys took the fight, made the trip from his native South Africa to Las Vegas, and had a bad cut to make the flyweight limit. A really bad cut.

“My coaches back then in South Africa, they were like, 'You're 21 years old, kid. You're killing yourself to make weight instead of focusing on improving your skill set. You're not cutting weight again,'” recalled Buys, who was stopped in the second round by Sanchez.

Lesson learned, Buys went back home, moved up to 135 pounds and ran off four consecutive wins, earning him another call for the Contender Series – at flyweight.

Short memory. Buys forgot the bad cuts of the past and took the November 2020 fight against Jacob Silva. 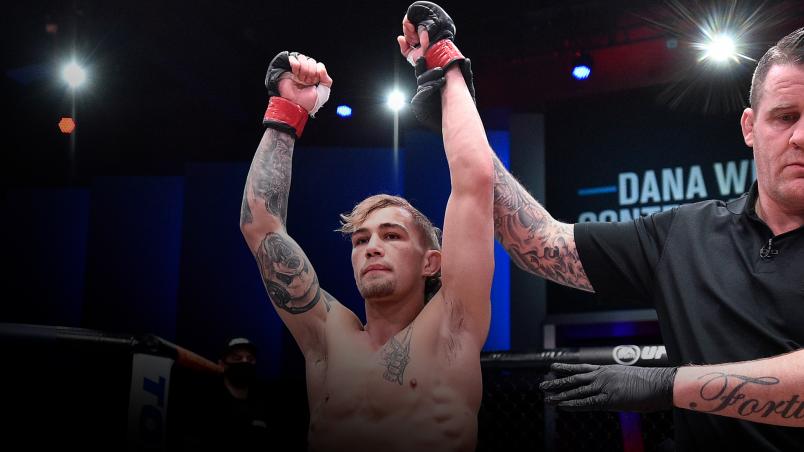 “One thousand percent we're like that,” he laughs, admitting that the fighter’s mentality is unlike that of any other person. “In 2017, it was a horrible weight cut, and then they come phoning almost four years later, and I'm like, ‘You know what, I was a dumb, immature kid, I wasn't too strict on my diet, I can do it again. I'm all grown up now, I have a wife that can help me, I can diet full-on.’

Buys hit his mark on weigh-in day, submitted Silva in the first round and earned himself a UFC contract, joining his wife Cheyanne on the roster. But after another rough cut for a March bout with Bruno Silva that he lost via second-round TKO, Buys had to put his short memory away and realize that to hit the marks he wants to hit in the sport, it can’t be at 125 pounds.

“No, no, bantamweight is home,” he said. “I don't think I'll ever in my life go through that again just to make flyweight.”

“Not for a fight at least, unless there's very big money.”

He laughs, knowing that there will be more than enough big fights at bantamweight if he gets on a roll, and that’s precisely what he plans on doing, starting with his Saturday bout against Montel Jackson. And he promises that if you were impressed with him before, you ain’t seen nothin’ yet.

“They (the fans) will get their fourth look, but they'll get their first look at a 135 JP on the UFC scene,” he said. “That ten pounds, it's insane how much that ten pounds can do. It sounds so little, but for me to cut that extra ten pounds, I would need ten weeks' notice to get a fight, and then for ten weeks, I have to diet very strict, and I can't even eat. My wife eats more food than me, and it came to the point where my nutritionist said that I would have to start triathlon training so I can burn calories and make weight, and I can't be sparring and grappling and things like that because I need to save my body. How am I preparing for a fight, but I have to do different training just to make that weight division? So, at 135, you're gonna see someone that's not starving, I train martial arts up until the very last day, and I'm able to compete and train against bigger guys all-round. Where at '25, I'd have to be very selective. I'd have to pick small partners, and when we get to the fight and s**t gets real, it's like, this isn't what we prepared for. A 135 JP is a JP that's always on the mats, training multiple martial arts every day, so they're gonna see a real martial artist.”

It’s the platform he’s been waiting for, not just since deciding to move to 135 pounds or since getting into the UFC. It’s a dream he’s been chasing since he first strapped on the gloves, only to find out that making it to the UFC while being based at home was a hill to high to climb for both him and his wife. 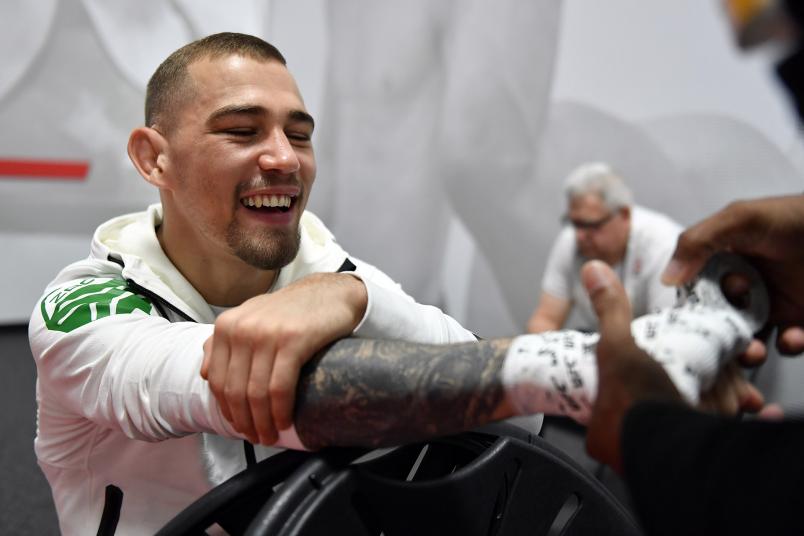 JP Buys has his hands wrapped prior to his fight during the UFC Fight Night event at UFC APEX on March 20, 2021 in Las Vegas, Nevada. (Photo by Chris Unger/Zuffa LLC)

“If my wife and I could have had fights out of South Africa, we could have possibly still been there, but she was to the point where she wasn't getting any fights for her career,” said Buys. “She was offering to fly herself out to go fight and pay for her own flights and she still couldn't get fights while being in Africa. It became a struggle for both of us, but I feel like God led us this way. We made the decision, and it was difficult to leave what we had back there; we had to sell everything we owned. I had two motorcycles, a car, a house full of stuff, and we left there with six thousand dollars. And that's selling every single thing I had other than what we brought here in four suitcases. Me and her came here, we figured it out, it was extremely difficult, of course, leaving people behind, but what makes it more difficult is the fact that I'm still not able to go back home to see any of my family. I had family members pass away and I'm still here chasing this dream. So the decision is never been easy, but I've always been either all in or all out.”

The couple arrived in the United States on October 1, 2019 (yes, he remembers the date), and they moved from Texas to Las Vegas on June 10 of this year. Now the Buys are in the UFC, something JP believes wouldn’t be the case if he stayed back home.

“It's not easy at all, leaving friends, family, your comfort zone,” he said. “I was a resident in South Africa for 24 years before I left there. People talk about the bad life in South Africa and how Africa is so tough and this and that, but we live a good life out there. Stuff works, you have access to everything, there's good training. But if I did not leave South Africa in October 2019, I would not have been in the UFC today, regardless of how many fights I would have won in South Africa.”

There’s that fighter’s heart and spirit again, and now with the ability to fight at his optimum weight and give it his best effort, Buys has the chance to hit that next goal on his list – to win in the UFC.

“I haven't tasted victory since November last year and just knowing how hard I worked and what I had to give up and restart and do again just to get to the UFC, never mind win in the UFC, I think once I win, once I get Top 15, big money in my bank account and I can take good care of my family, I'll appreciate that so much,” he said. “We don't take it granted.”