Bantamweight Reflects On 2020 Against Saturday's Tilt With Randy Costa
By Thomas Gerbasi, on Twitter: @TGerbasi • Sep. 16, 2020

No one will forget the year 2020. UFC bantamweight Journey Newson, who still has at least one fight with Randy Costa to get through this Saturday before he starts giving his full Year in Review, at least has a preview.

“I'd probably describe it as eating cereal with a bunch of nails,” he said, and that has little, if anything, to do with his 38-second knockout win over Domingo Pilarte in February being overturned by the Texas Department of Licensing and Regulation due to a positive test for marijuana.

Instead, it has to do with a lot of things that have gone on in the world over the last several months, including the COVID-19 pandemic, social justice movements and demonstrations, and unrest in his home city of Portland, Oregon. It can be draining for anyone, but especially for a bi-racial man who was stunned when Ahmaud Arbery was shot and killed in Georgia while out jogging in February.

“I run, and I run with a hooded sweatshirt on because I want to sweat. And there’s been a few times when I had to look back to make sure I'm not being chased and that sucks,” said Newson, who often runs in upscale neighborhoods. “That's motivation for me. I want to get to that type of living comfortably so I like to run there. And ever since all this started, I'm always cautious about where I go now and what I'm wearing. It just sucks.”

In the subsequent months, Newson made his voice heard during peaceful Black Lives Matter marches, recalling the unfortunate moments when the color of his skin did matter to those around him. 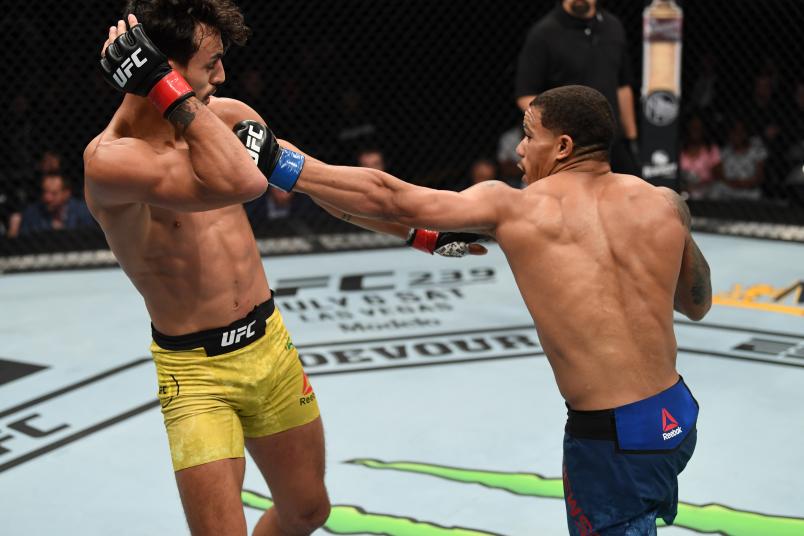 “For most black people, for my family and for the black people that I talked to when we were peacefully marching two months ago, our feelings are hurt,” he said. “We've been through racial injustice in our schools, I've dealt with that since fifth grade. I've had girls in middle school and high school say they wouldn't date me because I was too dark. And I changed without even knowing until this all started popping off. I was listening to country music, I was hanging around with more white people to fit in. And I didn't realize all that until I started questioning myself and why I was getting so angry about it. I'm not a Democrat or Republican. I'm just a black dude whose feelings have been hurt by what I've seen and what I've been through. And I guarantee you that's mostly what most black people are feeling.”

You can hear the hurt in Newson’s voice, and he’s thankful to just air out feelings that have been bottled up for a long time. It’s almost as if fighting is secondary at the moment, but the 31-year-old is a pro, so he has been preparing diligently for what many are considering to be a show stealer on a stacked card in Las Vegas. Not that he’s thinking about such matters.

“This fight is just like any other fight to me, honestly,” he said of the Costa bout. “They give me an opponent, I say yes and I put in the work to try to get the W. Is he a big name? No. But neither am I, so it is a good matchup because we're both up and comers and we'll see who is gonna further their career in the UFC.”

Stepping in on short notice for a fight with Ricardo Ramos in June 2019, Newson lost a unanimous decision to the Brazilian, but he had his moments, marking him as a fighter to watch. That spotlight grew brighter when he knocked out Pilarte in less than a minute, and despite the subsequent reversal of the final outcome, it’s still a win in the 31-year-old’s book.

“It's a win for me, for sure,” said Newson. “I would never take away that win. I consider myself 10-2. I don't care what they put on my record. I was in there, I did the work, I put the work in, a lot of people agree with me. They don't see how that (marijuana) is a performance enhancer.”

Most do agree, but the call stands, and Newson has accepted it. He’s moved on and now there’s another fighter in front of him that he’s going to have to battle. That’s the easy part. Getting there is a little more difficult for the soft-spoken bantamweight.

But hey, being on the UFC roster did allow him to quit his day job as a truck driver. That’s got to be a good thing, right?

“I try to tell myself, you could be at work right now on my lunch, and I'm not,” he said on September 4. “I'm chilling at home, I just did conditioning this morning, I'm about to go to the lake and do some swimming laps and then come back and train again later tonight, and that's cool. That's the dream all of us are trying to chase.”

See, it’s not so bad after all. Newson laughs, hopefully in agreement.

“We're on a very good streak right now,” he said. “I love the two fights that I had in the UFC and I'm hoping that (UFC President) Dana (White) and everybody else in the UFC looks at me as someone they can keep for the future.”