Journey Newson Got His Mojo Back

After Picking Up His First Official UFC Win, Journey Newson Is Feeling Better Than Ever Heading Into UFC Fight Night: Cannonier vs Strickland
By Thomas Gerbasi, on Twitter @tgerbasi • Dec. 16, 2022

Journey Newson never expected to start his UFC career with an 0-2, 1 NC record. But not for one second did he think he was over his head on the big stage entering his fourth walk to the Octagon to face Fernie Garcia in May.

“I fought (Rafael) Ramos and I was pretty good in that fight,” said Newson of his UFC debut in 2019. “I knew I belonged there (in the UFC) after that debut. So that wasn't really a question. But fear and doubt always popped up after a loss. I got knocked out by Randy Costa pretty quickly (in 2020) and I always felt like that was just a lucky shot early in the round. But I never let that one go, and I always hope that we fight again. But going in against Fernie, there's some doubts because I just got knocked out, and I'm pretty sure every fighter has that. But working with the (UFC) PI and their psychiatrist really, really helped take away some of that doubt.”

At weigh-ins for the fight, Newson held a red balloon, which was a tool that was suggested to him to deal with anxiety. It worked, as Newson put aside those issues and showed up to the Footprint Center in Phoenix ready to fight. Three rounds later, he had his first “official” UFC win. 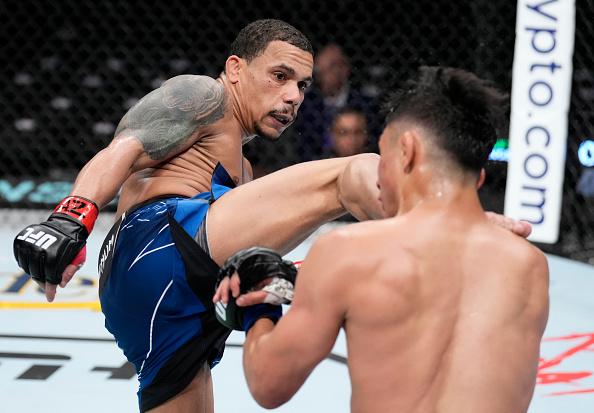 Journey Newson kicks Fernie Garcia in a bantamweight fight during the UFC 274 event at Footprint Center on May 07, 2022 in Phoenix, Arizona. (Photo by Chris Unger/Zuffa LLC)

“Yeah, it felt pretty good,” he said. “After watching it, I had mixed feelings about it. I definitely used most of my tools compared to his. It was obvious he was just throwing hands, and I was throwing hands and feet, so I got to use a bunch of my tools, had a few takedowns and stuff, so it felt good; there were just a few things I saw I definitely could have done better on, especially in the beginning of the round. I'm a slow starter, so I'm somewhat trying to work on that, but, at the same time, it's hard for my body to do something that it's trying not to do. I always heard that expression 'fools rush in,' so I'm always cautious about tagging the person first or going in first in the first round because they have all their strength and they have a lot of energy. So it's mixed feelings about going in first. So I'm trying to work on that.”

It’s the perfectionist in the 33-year-old, who gets the quotation marks around the words official UFC win since he stopped Domingo Pilarte in 37 seconds in their 2020 bout in Texas, only to see it overturned to a no contest due to a positive test for marijuana. It’s still a sore spot with Newson, who still sees it as a win.

“I count that all day, for sure,” he laughs, but now that the “official” win is out of the way, he can start moving forward in a crowded bantamweight division, with the next step being a Saturday meeting with Sergey Morozov. 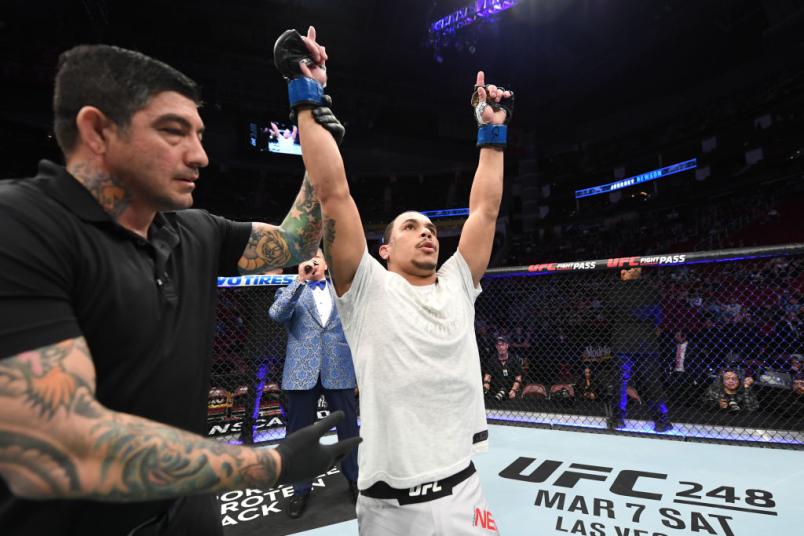 Journey Newson celebrates his KO victory over Domingo Pilarte in their bantamweight bout during the UFC 247 event at Toyota Center on February 08, 2020 in Houston, Texas. (Photo by Josh Hedges/Zuffa LLC)

It’s an intriguing matchup to kick off the UFC Fight Night card at the APEX in Las Vegas, because Morozov has shown the tendency to get pulled into a brawl at the swing of a fist. That’s just fine with Newson, who has some winter travel plans should he pick up a bonus.

“I'm definitely excited to test myself against a higher-level opponent,” he said. “Fight of the Night, for sure. Anything that can get me a bonus, I'm excited for. (Laughs) But I gotta put it out. I know I have that game in me where I can make people fight my fight. I gotta bring that out and not make me fight his fight.”

Sounds like someone got his mojo back over 15 minutes with Garcia earlier this year.

“I felt like the mojo was always there, but there's always the big-ass weight of stress in front of me that I couldn't get past,” Newson admits. “The PI helped me with all that, and win or lose, I was gonna post that red balloon regardless because I got through camp with the exercises that they provided for me, and it was helping. That I won the fight was extra. So going into this one, I'm looking at another win. I'm trying to get a two-fight win streak going so I can start climbing up the ranks. This guy is ahead of me, so it's a double whammy if we can beat him and jump in the rankings.”