Josh Thomson - The Punk's Not Dead 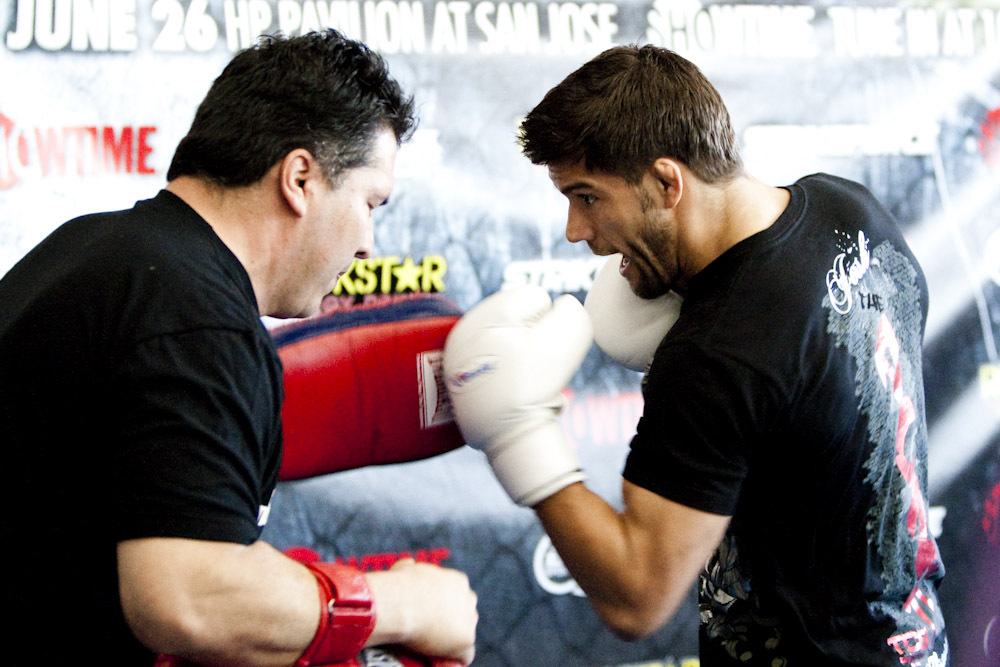 When it comes to bad luck, Josh Thomson has endured more than his share. He once was one of the top lightweights in the UFC, at least until the organization dropped the weight class for nearly two years. Then he became one of Strikeforce’s bright lights and that promotion’s champion, but then injuries had him sitting more than fighting. It’s enough to make a young man want to ask ‘what in the world am I doing this for?’

“I’ve gotten to that point several times, but then it’s a fire thing,” said Thomson. “As soon as you step away from the sport for a while, you get that itch and it’s hard for people to walk away. I am at the point in my career where I am starting to look and focus on opening my own gym, starting my own career, and starting my own businesses and stuff. So those are things you start to think about; it’s like how much more can your body take? And you start looking towards your future. That’s realistically what you start doing.”

But like anyone with a fighter’s heart steeled in battle, Thomson isn’t ready to give up yet. This Saturday in Columbus, Ohio, nearly 15 months after his last fight against Tatsuya Kawajiri in December of 2010, “The Punk” returns to Strikeforce to face KJ Noons. It’s a fight that Thomson sounds like he’s looking forward to as much as diehard MMA fans are.

“He’s a very talented, very athletic kid,” said Thomson. “He’s very explosive, and he’s becoming more well-rounded. If you notice in the last fight, he took Billy Evangelista down two or three times, he shot three or four times, and he’s definitely trying to open up his game. And not only did he do that, but he was able to avoid getting submitted in the third round and he’s going to be a dangerous fighter. He’s opening up his kickboxing, you can tell he’s working his kickboxing more instead of just being a flat-footed boxer, and we’ll see what happens. He’s really trying to open his game right now, and I think with the time off, he’s just getting back to his true MMA form. I told everybody this, I’m gonna end up getting the best KJ that you guys have seen since he’s returned.”

But the question most have is whether everyone will get the best Thomson. And the scouting report there is ‘so far, so good.’ And that’s welcome news considering all he’s been through, not just in the last few years, but throughout his 11 year pro career. A shooting star who always showed great potential, Thomson flew out of the gate in 2001, and by the end of his first year as a pro, he was fighting Japanese superstar “Kid” Yamamoto. Four fights later, he was in the UFC, and after back-to-back wins over Gerald Strebendt and Hermes Franca, he was knocked out by Yves Edwards at UFC 49 in August of 2004. It was to be the last lightweight fight in the UFC until 2006.

Undaunted, Thomson fought and beat Daisuke Sugie in PRIDE Bushido and then fought in the first Strikeforce event against Clay Guida in 2006. He lost to Guida that night, but it began a long relationship between the San Jose native and the promotion, particularly CEO Scott Coker. To date, Thomson has competed 11 times in Strikeforce, winning and losing the lightweight belt against Gilbert Melendez, and if the 33-year old has one wish, it’s to get back to the form he showed during the 2006-08 stretch where he won eight in a row.

“I was able to stay healthy and go on a good run, like an eight fight win streak, and then I beat Gilbert and then I ended up breaking my ankle,” said Thomson. “That whole year I just spent re-breaking my ankle over and over. I broke the same bone in the same ankle three times in a year. I noticed that my game never got back to that level. And I’m still, at this moment, trying to get it back to that level. I know my conditioning and all that stuff has been spectacular, but my technique and everything else has kinda dwindled a little bit. I have been working a lot more on trying to get back to that and focusing on that, but we’ll see what happens.”

Winner of two of his three bouts in his last active year in 2010, Thomson now returns to an organization that looks a lot different than it did then. Zuffa is now in control of the promotion, giving it the behind the scenes muscle to take Strikeforce in an even bigger and better direction. And Thomson’s eager to get started.

“Scott Coker is still the CEO, and I’m a huge fan of Coker,” he said. “He brought me up from taking me over from PRIDE in Japan and bringing me here, and fighting in Strikeforce. I also have a lot of respect for Dana (White) and Lorenzo (Fertitta) and those guys at the UFC because back in the day Dana took a chance on me and signed me against some of the other guys that said I wasn’t quite ready. But the UFC signed me in Japan after I fought Kid Yamamoto, he loved the way I fought, and I owe a lot of my career to him as well. So honestly, I’m fighting in the best and the biggest promotion in my eyes because I helped build Strikeforce to the level where it is. Honestly, the benefit of it all is that it doesn’t matter if Dana is the promoter or Scott’s the promoter – it doesn’t change the way I fight. I’m gonna fight my ass off and train my ass off and go out there and give the best show I can.”

And if he can recapture his prime form and get past the dangerous Noons, Thomson will be in a prime spot in the weight class, as it won’t take too much to promote a rubber match between him and Melendez. It may even be the biggest match Strikeforce can make at 155 pounds. Thomson agrees, and after all the ups and downs, what sweeter ending would there be than a title fight in which he regains the title? That may just make all the aches and pains from over the years worth it.

“I definitely think I’m the one that poses the biggest threat against Gilbert, and I’ve proven it before,” said Thomson. “I’ve beaten him and beaten him convincingly all five rounds, and I was beating him in the second fight in the first round and three quarters of the second round, but I got a little arrogant and cocky and got dropped at the end of the second round. I look at it as if the fight was actually mine and it was going the way I wanted it to go, but I think my confidence got the better of me, and it ended up costing me. The tide turned after that. Had we finished out those last 15-20 seconds of the round, I would have been up two rounds to none in a five round fight and all I would have needed to do was win just one more round. So yeah, I’d say I pose the biggest threat in Strikeforce right now to beat him. And the person that’s gonna beat him is somebody who’s well-rounded like myself – someone who can wrestle, someone who can stand, and there is a submission threat there. I haven’t really seen a whole lot of guys in the sport right now that can do that to him.”