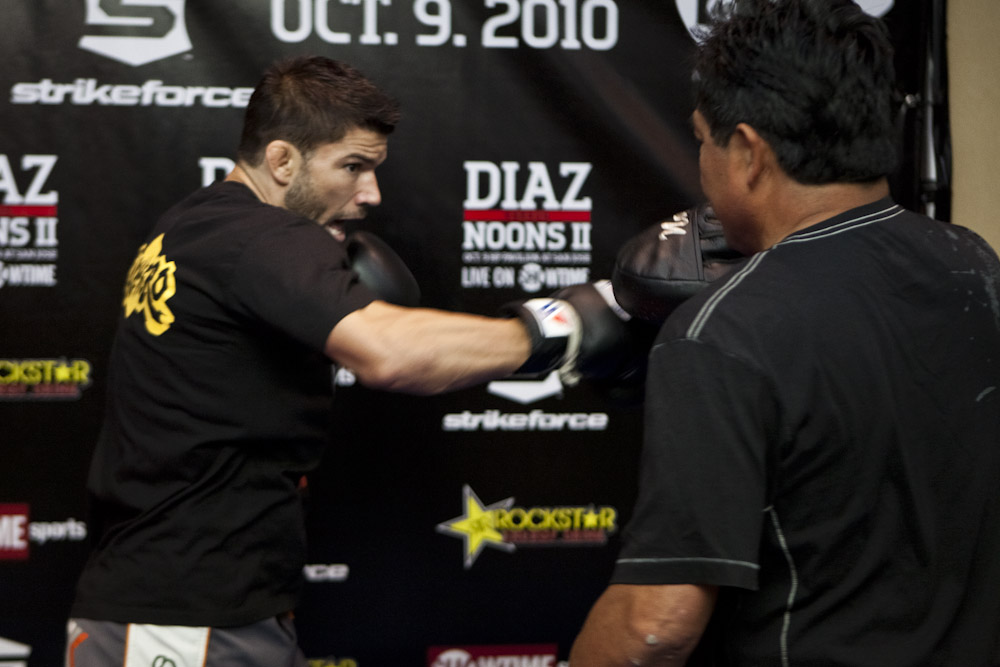 Despite having spent 10 rounds together already, there has been no trash talk between Josh Thomson and Gilbert Melendez before their rubber match for the Strikeforce lightweight championship this Saturday night. No bad blood, no mean mugging, just a high level of respect between two professionals who know that no matter what happens before they step into the cage at the HP Pavilion in San Jose, California, when the bell rings, they’re going to have to fight just as hard as they always have, talk or no talk.

“People always talk about how they love watching the grudge fights,” said the number one contender for the crown. “Granted, they make for great hype videos and stuff, but when it comes down to the fights, if you think about it, the fights generally end up being boring because both fighters are afraid of losing to that person that they hate so much. But Gil and I, we have a mutual respect for each other, and my honest opinion is, if I lose to him I know he’s gonna be a gentleman, I know he’s not gonna talk down or talk bad about anything to do with me or the sport, and it’s easier to fight harder against somebody like that, knowing that no matter what happens, they’re going to show you respect. When it’s somebody that you hate, you’re really afraid to pull the trigger because you don’t want anything to happen to you where you get caught or knocked out. You don’t want that guy to have bragging rights over you. With Gil, we’re 1-1 right now, both fights have been Fight of the Year candidates, and they’ve both been impressive fights.”

Truer words have never been spoken. In boxing, Maurice Blocker and Simon Brown were best friends, but their 1991 fight for the welterweight title was one of the most brutal back-and-forth brawls ever. In MMA, Chuck Liddell and Randy Couture were cordial and respectful toward each other, but they had no problem punching each other over the course of their own trilogy. The same goes for Thomson and Melendez. No, they’re not best buddies, but after two championship fights in 2008 and 2009 (the first won by Thomson, the second by Melendez), they have developed an admiration and respect for each other that can only be created through the cage battles they’ve endured.

“There’s no doubt about that,” said Thomson with a chuckle. “I’d say we know each other pretty damn well. If you listened to Gil commentate my last fight with KJ (Noons), he was kinda calling out the positioning I was gonna use and do before I was actually even doing it in the ring. So he knows me pretty well, I know him very well, and I know that if I go for the knockout and I land three punches and follow him, he’s still gonna be standing, he’s still gonna be right there. He’s definitely not gonna back down, and if anything, he’s gonna push forward. That’s the kind of fighter he is, that’s the person he is, so I don’t anticipate him changing anything in his mentality because that’s the way he’s been ever since I’ve known him and he’s always been that fighter inside that when you hit him with a good shot, he wants to show you that he can take it and he wants to be right back in your face and let you know it didn’t bother him. There’s a lot you can know about a guy by spending that much time in the ring with him.”

Winner of three of four bouts since he lost his Strikeforce title back to Melendez, the man he won it from 18 months prior, Thomson’s greatest nemesis may not even be “El Nino,” but the injuries that have hampered him throughout his career. So there was great anticipation for the San Jose native’s return to the cage in March after a nearly 15 month layoff. Asking the Strikeforce brass for the fastest road to the title, he was matched with talented striker KJ Noons, and while it wasn’t vintage Thomson, he got the unanimous decision win. Initially, “The Punk” was critical of himself and his performance, but upon further viewing, he was able to learn to live with the result.

“I was hard on myself, but I wasn’t disappointed with my performance in how I was able to get the job done,” he explains. “I thought I should have been able to finish him, submission wise or ground and pound, but I had cut back on my training so much that I was really exhausted for that fight. I was tired. I always considered myself to be one of the more fit athletes, and I’ve always been in shape, ready to fight, and this fight was something I hadn’t experienced in years, feeling tired like that. So I felt that had I been in better shape, I would have been able to finish him, probably in the second or third round. But you have to take the win when you can. When you don’t perform to your best ability and still get the win against somebody like him, you really gotta look at the positives of that and that’s kinda what I did after the fact. I was upset with myself in the ring, but then later on, a week or two down the road, I actually went back and looked at it. I dominated the fight in all areas; I just needed to focus more on my conditioning and get back to the hard training I used to do.”

By the time the dust settled on the Noons fight, the die had been cast for his next one, a championship bout against Melendez, a rubber match that was almost inevitable given their history and standing in the organization. Add in that this weekend’s event is taking place in the backyard of both Bay Area battlers, and this was a natural.

“Yeah, of course,” said Thomson. “Obviously I think the two of us are the best guys in Strikeforce, so I think when that happens, we always find a way to meet at the top. When I beat him the first time, he made his way back up to me, and now I made my way back up to him. So it was just a matter of time, and this is where we ended up.”

Yet despite their history, Thomson doesn’t believe the results of his first two meetings with Melendez will have too much, if any, bearing on what happens the third time around.

“I beat him in ‘08 and that doesn’t do anything for me, and he beat me at the end of ‘09, so realistically it doesn’t do anything,” he said. “Those fights were years ago, and a lot of things have changed. Our games have changed, our age has changed, our mentality has changed, and I think the way we fight has changed a little bit. I think we’ve both gotten better and more confident in our skills, and things have changed. If I go in there with the mindset of ‘I’m gonna fight him the way I fought the first fight,’ he’s changed it up a little bit and he’s learned from that first fight a lot. So if I go back to just trying to do that, it’s not gonna work. And if he thinks I’m gonna fight him the same way I did last time, he’s mistaken, because I’m not gonna be that stupid to just go out there and brawl with him. He can expect me to try and pick him apart and do a lot of things that I did similar to the first fight, but I just gotta make sure I get in and get out and use my speed. That’s the biggest thing.”

And while the fight is technically the co-main event to the Strikeforce Heavyweight Grand Prix final between Josh Barnett and Thomson’s AKA teammate Daniel Cormier, another five round classic with Thomson and Melendez in the birthplace of the promotion could not only steal the show, but amp the company’s profile up even higher. That would be a satisfying result all around for the 33-year old veteran.

“Gil and I have been with the organization since the beginning and it’s nice to know that they’ve built the promotion around the two of us, along with Cung Le and Frank Shamrock,” he said. “The four of us feel like we carried this promotion on our backs to make it as successful as it has been, and it’s been wonderful. We’ll see what happens and where it goes from here, but at the end of the day, as a fighter, we just really worry about going in there, putting the best fights together that we can and giving the fans what they want. I’ve hit the age where it’s not so much about the wins and the losses anymore; it’s about really going out there and seeing what I still have left in the tank and just showing that I still want this. That’s a fight you have with yourself every day. As an athlete, you have to ask yourself ‘do you still want this?’ And certain fighters bring it out in you. Gil is one of those guys I’m gonna go and train my ass for, and there’s no doubt about it. He’s found a way to bring it out of me to perform my best and that’s really what it comes down to.”