"I’m one of those guys that when you ask me a question, I’m just going to tell you how it is." - Josh Thomson 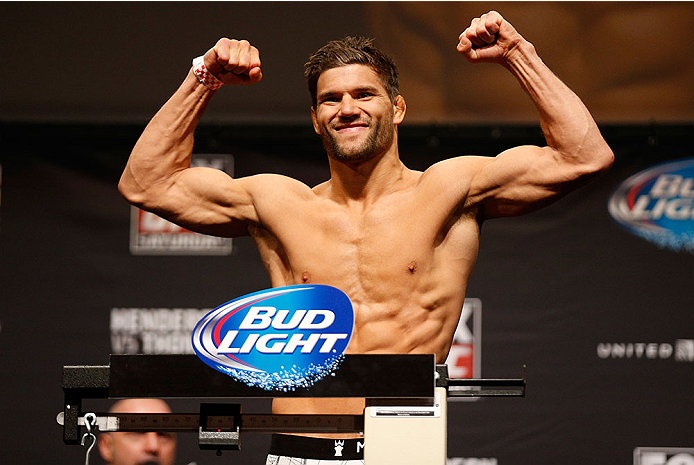 It was either the start of a revolution with honesty being the operative term, a snarky response to the worst question in the history of journalism, or simply Josh Thomson being Josh Thomson. Whatever it was, when Thomson said before his January fight with Benson Henderson that he had one of the worst camps of his career, it made plenty of noise. And that was fine with the former Strikeforce lightweight champion.

“People just want to hear the truth, and I don’t think there’s any reason to sugarcoat things,” said Thomson, who of course went on to fight five hard rounds with Henderson before losing a a five-round split decision that many thought he won. “It doesn’t mean that it’s going to affect the way I fight the night of the fight. I’m one of those guys that when you ask me a question, I’m just going to tell you how it is.”

So Josh, how’s training going this time around?

“What’s funny is, it really hasn’t been a great camp (Laughs), but it’s been decent,” said Thomson, who faces Bobby Green in San Jose this Saturday. “We just had a lack of coaches and lack of training guys because all of our coaches were training with (UFC heavyweight champion) Cain (Velasquez) at The Ultimate Fighter. So basically for the last two, three weeks of this camp, we didn’t have any coaches in the gym. It was the fighters coaching each other and helping each other out. Other than that, obviously we know what to do and I’ve been in the sport long enough that I have a good idea of what to do, so I was able to work with some of the guys that I normally work with and kind of clean things up and see how things go. So I wasn’t so much concerned about the training camp as much as finding out that I wasn’t fighting Michael Johnson anymore and now I’m fighting Bobby Green, which to me is a tougher and harder fight.”

There’s that trademark honesty again, and it’s appreciated. At the same time, there is no worry in Thomson’s voice, no fear that he won’t be ready to go on fight night. After 27 pro fights, most fought on the sport’s biggest stages against its toughest competitors, you’re not going to rattle him. It’s not in his makeup. And as he’s quick to point out, perhaps the worst moments of his career came before one of his greatest victories – a 2008 decision win over Gilbert Melendez in the first of their three memorable bouts.

“The first time I fought Gilbert Melendez I had a great camp, but a lot of things had happened to me throughout the camp,” he said. “I had a really bad case of cauliflower ear, so I wore headgear and tried not to wrestle too hard for a couple weeks. Then I got the flu for a week and then a staph infection a week before the fight. And I brought it all up, and I fought a great fight and destroyed him. So it doesn’t mean it’s going to affect the way I fight.”

If anything, the things leading up to Saturday’s bout have been annoying, not fight-altering, with the biggest annoyance being Johnson’s injury and Green stepping in to replace him.

“I’ve never had something change this close to a fight,” said Thomson. “And on top of that, I spent eight to 10 weeks training for one specific person and one specific style and then I’m getting switched to someone who’s a little bit more athletic who switches his style and his stance quite a bit and to me is a little bit faster, quicker and not as afraid to go to the ground because he has pretty good wrestling and is more well-rounded. So those are the issues you have to deal with.”

On the bright side, Thomson does get a home game in San Jose, the site of 10 of his previous bouts. You could say the arena now known at the SAP Center is the house Thomson and Melendez built, given their local roots and the Strikeforce fights they competed in there over the years, and the San Jose native is more than at home in the venue.

“It feels different every time I go there, but it always feels comfortable,” he said. “There’s something about the arena, something about the fans, the week of the fight sleeping in your own bed and going through your same routine. Nothing changes. (UFC Hall of Famer) Forrest Griffin has talked about this, and he said you train your body to be like a Ferrari all the way up until the fight, to peak on that one night, but what happens is that we’re in a routine for eight weeks of a camp and then that last week we fight outside of the country or the state, and your sleep gets messed up, your food goes out the door, and you basically just laid a big fat goose egg. (Laughs) It does ruin the fighter’s ability to put on a great show when they don’t fight inside their comfort zone.”

Forget talking about bad training camps, the next Thomson-led revolution could be fighters refusing to fight outside their hometowns, but all kidding aside, the mix of veteran experience and being at home has cured any ills this time around for the resurgent contender who was on the doorstep to a UFC lightweight title shot after his knockout of Nate Diaz in April of 2013. An injury to champion Anthony Pettis killed off that bout, but if he can defeat Green this weekend, “The Punk” will be right back in the race.

Thomson laughs, and as he explains how his training has evolved over the years, I ask him if he would prefer having 35-year-old wisdom or a 25-year-old body.

“One of the things I tell people is that you couldn’t have that wisdom 10 years ago,” he explains. “Why? Because back then I could do all those things (physically) and it wasn’t that big of a deal. Your body is different because you were younger back then. You could do those things and it doesn’t affect your body as much and you can recover a lot faster. As you get older, you have to train smarter, not harder, and pick and choose your battles.”

He’s picked a battle this weekend, maybe not with the person he was supposed to throw hands with in Michael Johnson, but Bobby Green will do, as long as the end result is what he wants it to be. If it’s not, he’s learned to accept that too, as long as the result is due to his opponent just being better, not him leaving some bullets in the chamber.

“I don’t let losing bother me,” he said. “I learned this from (former PRIDE great) Fedor (Emelianenko). He said ‘I don’t put pressure on myself about whether I win or lose; I don’t care. The fight’s gonna happen, you’re gonna go out there and give everything you got, and whatever happens happens.’ At least I know that I’ve given my all throughout this camp. I pushed myself really hard, I gave as much as I could, and when I go out there, I’m gonna fight my rear end off out there. So as long as I leave it all out there, we’re good.”

And if he does leave with his hand raised, how does this story ultimately end?

“The MMA story is I get past Bobby Green and I basically see who wins the next title fight and I wait for my title shot,” said Thomson. “I’m not one to sit around and wait for other people, but getting to this point of my career, I feel like I get through Bobby Green, there’s no other person in front of me who should get a title shot more than me. Ben had his two chances at Pettis, so if Pettis wins (his late-2014 fight with Melendez), then I can see them giving me a title shot. If Gil wins, I still see them giving me a title shot because what better history is there than between me and Gil?”

You’re not tired of seeing that Melendez guy yet?

“If it was for the UFC title, I would love to see him again.”