Josh Thomson: The Gold is All That Matters 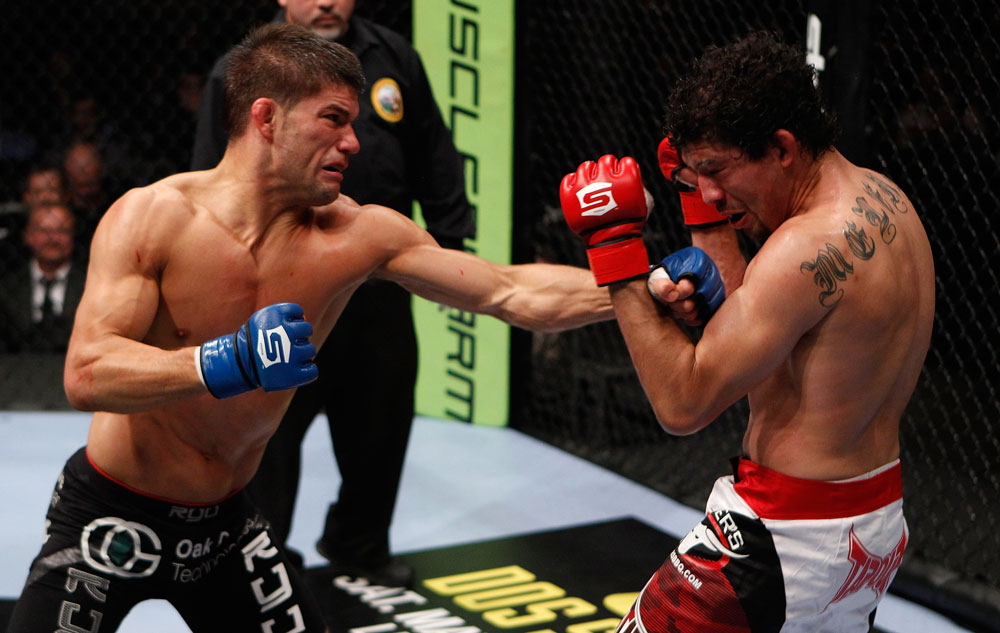 A title bout in mixed martial arts is five rounds at five minutes a pop. The ominous hour and 15 minutes mentioned is the accumulation of three particular championship scraps that went the distance and left frenzied fight fans with even less of an understanding of who is the better fighter. While judges have scored it twice in favor of one fighter and once for the other, as time ran out on all three occasions, neither athlete was backing down or close to being finished, clenching their fists for the impossible rounds six and seven.

If the cage is the crucible to determine who the better MMA fighter is, then Strikeforce’s fence failed at giving us all a clear answer between the organization’s final lightweight champion Gilbert Melendez and former champion Josh Thomson. Three fights and three decisions, with their most recent outing ending in the always controversial razor-thin split decision. While Melendez did leave the arena with the belt, “The Punk” Thomson knows he has beaten the champ before and that their trilogy hasn’t truly determined a winner, but has solidified his place with Melendez at the top of the 155-pound division.

“Some fighters are just cut out to fight each other and I think that's just the case with us,” says Thomson. “We bring the best out in each other. The fans get what they want, we put on a good show, and it benefits everybody. It’s an interesting matchup.”

At 34 years old and with a 19-5, 1 NC career dating back to the opening weeks of 2001, the San Jose superstar hasn’t slowed a step and is only revving up to stake his claim amongst the UFC’s premier lightweights. The Octagon isn’t unfamiliar territory for Thomson, who fought three times (2-1) during the company’s pre-TUF dark days and began fighting elsewhere while the UFC had its lightweight title on the shelf. The majority of Thomson’s tangles have taken place in the Strikeforce cage, where he fought 13 times and won the belt off Melendez in their first encounter back in June 2008. As evidenced by Melendez’s sole loss in Strikeforce and the two follow-up close decisions, Thomson was the stiffest competition by far, which created a respected rivalry that gave true integrity and excitement to the belt.

“I think people became addicted after our first fight,” tells Thomson. “The first fight was kind of one-sided where I put a pretty good beating on him. Add to that I was a 3 to 1 or a 4 to 1 underdog going into that fight. And Gilbert kept coming. Even though he knew he was behind and knew he was losing, he never gave up hope and fought his butt off. The second fight, I think was a war. We both threw down and had a great fight. He had got the better of that fight. I think it's just one of those things where if fans see us on the card they know what they're getting. They know they're going to get their money's worth, they know they're going to get what they paid for. They don't have a problem putting up that money to buy PPVs or the front row seats. I think any organization that has us knows that is what they're buying into. They know that we're going to come out there and lay it on the line.”

Some rivalries are built on contrasting styles (grappler vs. striker) or polar opposite origins (East vs. West, North vs. South), but Thomson and Melendez were perfect foils for one another because of their similarity. Some might give the speed advantage to Thomson and the power advantage to Melendez, but what made their scraps fun for fans was how well-rounded both athletes are and how both pushed the pace until the bitter end. While both come from excellent camps - Thomson hails from the American Kickboxing Academy gym and Melendez is about an hour away as a member of the Cesar Gracie Fight Team - the pair had trained together prior to their first fight, which is the true foundation of this excellent matchup.

“I think it's a mutual respect we have for each other,” reveals Thomson. “I respect him a whole lot. To me, he's a great fighter. He brings it every time. He lays it out there on the line. I trained with him a couple years before that. We trained together for about two years. We kind of knew what each one of us could do inside the gym and also inside the fight. I think it has made it easier to train for knowing and having expectations that I can take his punch and he can take mine and it's really going to come down to whoever has the better camp and who fights better that night. I feel like anytime we fight each other, it's just one of those things where whoever has the better night is going to be the one who wins. I think that showed in the last fight; it came down to whoever had the better night.”

As the UFC acquired Strikeforce and their top talent are making their Octagon debuts, it seemed fitting that Thomson and Melendez would also appear on the same card in the same arena where their trilogy took place: the HP Pavilion in San Jose. “We're put into a position trying to stake our claim in the UFC and that we're the top lightweights,” states Thomson, who has his eyes on the UFC title Melendez is fighting for, but on Saturday, he has his sights set on Melendez’s teammate Nate Diaz as the first hurdle needed to clear to get the belt. “That's what I'm focused on now. I'm focused on Nate and not what happened in the past. I am just getting ready for what is about to happen.

“I told the UFC I have no restrictions, so it's whoever you want me to fight, but as long as it's the fastest way to push me toward a title shot,” reveals Thomson, who will be taking on a fighter whose last outing was the December unanimous decision loss for gold against UFC lightweight champion Benson Henderson. Leading up to that headlining bout, Diaz was in rare form, winning back-to-back-to-back Fight Night bonuses in dominant performances over Takanori Gomi (SOTN), Donald Cerrone (FOTN), and Jim Miller (SOTN).

“It's going to be a tough fight,” affirms Thomson. “I think [Georges St-Pierre] kind of said it the right way; it's hard to find guys who are of the style of Nick [Diaz, older brother] and Nate. It's hard to find a long, good boxer that's left-handed. It's hard to find those and to find one that's good on the ground. I don't really know anyone in the sport that has those skills. So that being said, as far as stylistically, he poses a lot of problems. I've just been preparing. I've got a couple good left-handers, pro-boxers. As far as the grappling, I've got a good source of guys I've been training with at Checkmat, they're good jiu-jitsu guys. I've been really just focusing on whatever it takes to win this fight.”

In preparation for Diaz, Thomson is busy training in his hometown at the gym that he’s been with since the very beginning: AKA. For the standup, Thomson works his kickboxing with instructor Derek Yuen. For the ground game, Thomson shares the mats with Leandro Vieira and his decorated Brazilian jiu-jitsu team Checkmat. As many of the Strikeforce fighters are coming over to the UFC with a chip on their shoulder just like the WEC fighters did, Thomson’s motivation is the same regardless of the company, shape of the cage, or location - put on a show by giving it his all.

“I'm going to go out there and put on a show,” states Thomson. “I've been in this sport for too long. I wouldn't say it doesn't bother me when I lose, but I don't think about losing when I go out there. I'm just focused on doing the best that I can and putting on a show and making sure I give it all I got. The fans will always get the best out of me knowing that it was what I'm planning on doing.”

This Saturday in sunny San Jose, two lightweights clash to establish who is where amongst the division’s elite. “I have to make sure he is on his heels and make sure to keep him guessing and beat him to the punch every time,” asserts Thomson, who knows a win over Diaz could mean a fourth fight with Melendez or a first with Henderson, because whomever wears the gold is who he wants. “That's what I have to do with Nate. If I come off this with a win, I want to fight the winner of Gil and Benson. I want to fight the winner.”

If “The Punk” can take out the younger Diaz, then Thomson is eager to either make it an even 100 minutes with Melendez or start a new series with Henderson.