Josh Parisian Is Ready For The Big Show

From WXC to The Ultimate Fighter to Dana White's Contender Series, Josh Parisian has proved he is ready for the UFC. He believes he will prove that once and for all this Tuesday.
By Walker Van Wey • Aug. 16, 2020

Josh Parisian spent many nights in WXC cages, and just as Justin Jaynes and Khaos Williams have done before him, he’s ready to finally make the splash into the UFC.

In true Michigan fashion, Parisian is back and refuses to let poor circumstances take over. From the Contender Series to TUF and back, his journey was made all the more special with a trip back home to the Southgate cage.

Parisian, who had knocked a man out in front of UFC President Dana White on his first DWCS appearance, kept his composure and remained a likable fighter in the TUF house, then went back home to the promotion that feels as close to home as home. WXC.

“I love WXC,” Parisian said. “My first title fight was actually at a WXC show. I was with WXC before it even went to Norbert [Pasztor] and Michael [Pedenelli]. I’ve been with them for so long and had so many fights with them and they’ve always been so great.”

The world of regional fighting is sometimes a world of plotting and scheming. In some cases, concession stand employees leave with more money than fighters doing favors for promotion owners. For Parisian and every other fighter fighting under the WXC banner, a WXC fight night is a night free of financial worries. Show up, fight, they’ll take care of the rest. 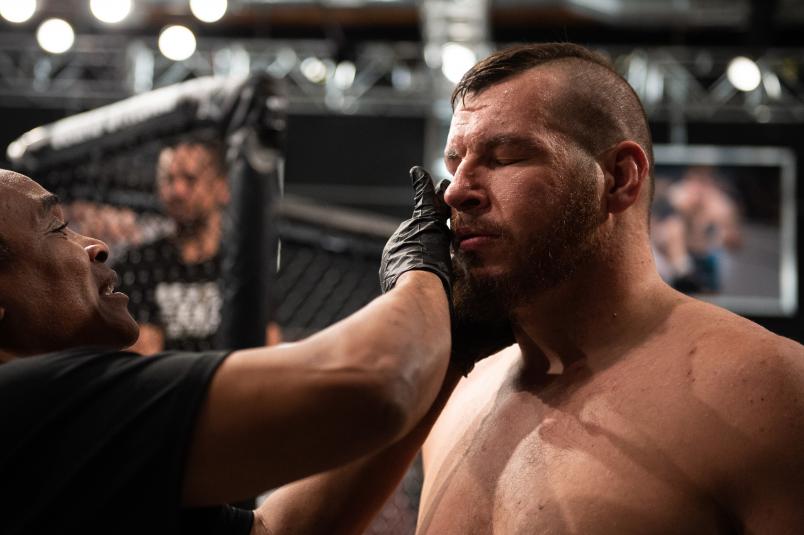 Josh Parisian prepares to enter the Octagon during the filming of The Ultimate Fighter: Heavy Hitters on JULY 26, 2018 in Las Vegas, Nevada. (Photo by Chris Unger/Zuffa LLC via Getty Images)

“When I want a matchup they’ve always done anything they could to make it happen and I’ve never been swindled out of my ticket money or anything like that,” Parisian explained. “I get what I’m supposed to get, I get paid the night of the fights and they always go above and beyond to make sure I’m good.”

The promotion has been around long enough to put a handful of fighters into the UFC, including current bantamweight star, Cody Stamann, but is beginning to really expand in 2020. After a 2019 deal with UFC FIGHT PASS, WXC has put Justin Jaynes and Khaos Williams into the UFC, and pushed Parisian and a couple others into the Contender Series spotlight.

“I really feel like WXC has stepped up,” Parisian said. “Obviously they have the deal with UFC FIGHT PASS and it just seems significantly more professional every year and I think it’s becoming one of those organizations that’s going to become a well-recognized feeder league for the UFC.”

The Michigan promotion not only operates reliably but also keeps a tight-knit crew. Every fighter who moves on to the UFC speaks of their excitement to get back and watch Mr. Throwdown start fights. Beyond that is an unspoken brotherhood between fighters.

“Josh has already accomplished so much,” WXC veteran Justin Jaynes said when he heard of Parisian’s inclusion on Contender Series. “He’s got a spinning backfist knockout on Contender Series, goes on The Ultimate Fighter, look at this guy. I’m sure he’s probably grinding it out in the gym trying to find the next step. You can’t teach that. Hat’s off to Josh. I’m very proud to have trained with him and I hope he accomplishes everything he wants to.”

Parisian is up against an LFA product in Chad Johnson, so the path to the UFC won’t be an easy one, but win, lose or draw, contract or no contract, Parisian will not only have his gym behind him, he’ll also have WXC on his back.