Josh Koscheck: Putting Everything on the Line in Rio 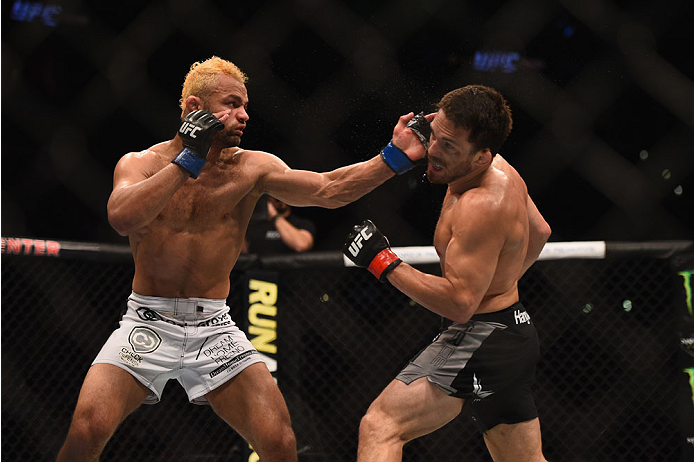 While that mindset has become popularized in the modern vernacular of MMA due to the proficient output of fighters like Donald Cerrone and Benson Henderson, it’s an approach Josh Koscheck has been taking for a long time. In the aftermath of his stint on the original season of The Ultimate Fighter, “Kos” took every opportunity he could find to step into the Octagon and sling leather.

That drive and determination is the reason the former NCAA Division I national champion wrestler vaulted himself into title contention in the welterweight fold, and those same fires were the motivation behind his most recent decision to jump back into the fray on short notice. And although the news of the Dethrone Base Camp leader facing Erick Silva at UFC Fight Night: Maia vs. LaFlare was undoubtedly shocking to some, that’s precisely the type of situation Koscheck wants to be in.

Two weeks after his loss to Jake Ellenberger at UFC 184 on February 28 in Los Angeles, he received a phone call from UFC President Dana White. With the call came an offer to return to action in quick fashion to face the talented Brazilian striker, but Koscheck wasn’t concerned with who he would be fighting.

The only thing he cared about was shaking the sting of his most recent loss and getting the opportunity to put himself back into the line of fire to bring out the best of what he has to offer.

“Dana White called me a few days after my last fight to see what’s up and check on how I was feeling,” Koscheck recalled. “I told him I was feeling awesome and there are bigger things in life than winning and losing fights, but I’m a competitor and I take it to heart. I told him I made one mistake in that fight and it cost me.

“I told Dana I was in shape and ready to go. If he got any calls about anyone dropping out at 170 please let me know because I was ready. I would fight on a one day notice. I don’t care. I was in shape and I was going to stay in shape until it was time for me to fight again. Then I got a call on a Thursday night at 11 o’clock from Dana telling me he had a fight for me and it was in Brazil. I told him done deal. We immediately got to work on getting the visa because nothing was guaranteed until I got it, but that came through on Saturday and I flew down to Brazil on Monday.”

With more than a decade spent in the sport, Koscheck has amassed plenty of experience in short turn situations. He’s stepped up to the plate every time the UFC has asked him to do so, and offered his assistance to scrap on plenty other occasions. And while his journey has been a mixture of success in high-profile moments and setbacks in the spotlight, Koscheck has remained firm on the mindset of continuing to push forward.

It was a mentality forged in wrestling rooms in his early years of competition and he’s continued to carry that flag into his career in MMA. In his mind, constantly testing and challenging yourself is the only way to keep that competitive spirit burning, and he believes it’s a lesson the next generation of competitors need to take note of.

“I’ve always liked to have quick turnarounds,” Koscheck said. “I’ve always been one to step up when the UFC needed me to. I just want to fight. I don’t care who, when or where. I just like to get in there and fight. I took a 15-month layoff and the last fight gave me the opportunity to go in there and get the kinks worked out. Hopefully this one will be a lot better than the last performance.

“These young fighters, man, they have to wake up and start fighting. That’s what they are training for, right? You don’t get paid and you don’t get to the championship level without fighting. I think that’s the biggest thing these young guys can learn from a situation like this is to always be in shape and ready to fight on a week’s notice. In fighting, your career is only so long. Why spend all of that time in the gym training and getting your ass kicked in there and getting your body beat up? Spend that time competing in front of millions of people inside the Octagon where you can make money doing it because you make no money in the gym. You only build your bank account in the gym but you make your money in the cage.”

While Koscheck’s tenacity brought him to Brazil to fight on Saturday night, there’s no way of denying the 37-year-old Pittsburgh native has a stern task in front of him. Although Silva has also had his fair share of setbacks inside the Octagon, he’s as dynamic as they come when the cage door closes. That said, Koscheck is as “been there done that” as it gets on the sport’s biggest stage, and he’s confident he’ll be able to handle anything his Brazilian opponent will throw his way.

“[Silva] is no different than the guys I’ve fought in the past,” Koscheck said. “He’s athletic and does some crazy spins and things like that, but he’s no different than anybody I’ve ever faced. He’s going to come out hard in the first round, slow down in the second, and die out in the third. I only had time for two sparring sessions to prepare for this fight and about eight days of training total. I just went through a full training camp before my last fight so eight days is more than enough time to get my cardio back up where it needs to be.”

The short-notice turnaround is not the only storyline going into this fight. Where Koscheck is a former title challenger and has been considered a perennial contender in the welterweight ranks for the better part of the past decade, that status has taken some damage as of late. He’s dropped four consecutive bouts inside the Octagon, and a fifth could spell disaster in a variety of ways.

With that in mind, he’s facing up to the task of turning back Silva on Saturday night in Rio de Janeiro as a fight where everything is on the line. He has to rise to the occasion because there is no other option. And while those hovering circumstances may be daunting, Koscheck is no stranger to stepping in when the stakes are at their highest.

“I don’t mind pressure,” Koscheck said. “This is definitely at the lowest point of my career as far as winning and losing is concerned. With that being said, my legacy is on the line in this fight and I have to go in there and fight my ass off. I have to put it all out there and I can’t be afraid to take chances. That’s what I’m going to do in this fight. I plan on taking some chances and putting some hands on this guy. I want to let everyone see the progress of Josh Koscheck over the last 10 years. I’m coming to fight.”