"This is the toughest fight that I’ve had, but it’s not the toughest battle I’ve had in my life." - Josh Clopton 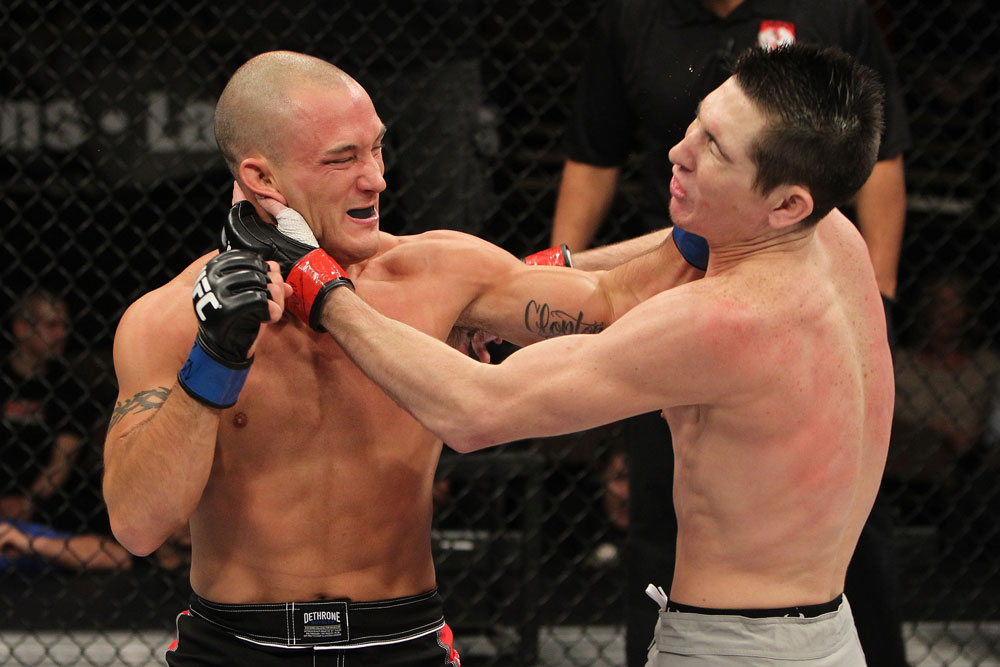 Everybody has one of those days. Josh Clopton had a bunch of them all in rapid succession, and eventually, he just needed to disappear.

“I had to put aside fighting for a bit,” said the 32-year-old featherweight, who felt there was plenty of promise in his pro MMA career when he was called to compete for a spot on The Ultimate Fighter 14 in 2011.

Then he lost to Dustin Neace in the elimination round, prompting him to go back to his day job working with computers. He would get a short notice call to fight Steven Siler on the season finale card in December of 2011, but he lost that fight as well. Still remaining on the roster, Clopton’s 2012 was even worse, as he dealt with a knee injury that required surgery, and a divorce.

At that point, it was off to the woods with his dog and his books.

“Watching fighting, talking about it when I couldn’t train, especially in the dark moments when I was still on crutches and didn’t know how my career was going to turn out, it was the last thing I could think about,” he said. “So I just got away. I went and stayed in a cabin, I took me and my dog and I went in the woods. I had some books to read, I went to the lake on crutches, me and my dog, and I got away from everybody and everything and focused on the very basics in life and the things that are there to be thankful for. That helped me realize that fighting is a gift, something that I have in this moment and that I’m not going to have forever. I can’t rely on my physical abilities forever, and it made me very thankful for what I have and it made me see what is really important in life and focus on those things.”

And one of those things was the fight game, something he’s far from ready to give up.

“This sport tests me, and I’m all about seeing how far I can go and figuring out the type of person I am, my breaking points, where I thrive, where my weaknesses are,” he said. “It’s just self-realization, and there’s not many things out there career wise that can show me that, push me, and take me to those places like this sport can.”

It’s 2013 now, and what Clopton aptly describes as “a pretty rough year” is over. He’s healthy, he’s hungry, and on Saturday he’ll be in Rio de Janeiro, Brazil for a bout with veteran Rani Yahya. On paper, it’s tough to compare Clopton’s 6-1-1 record with Yahya’s 18-7 slate, but the Columbus, Mississippi native didn’t hesitate when offered the bout in Yahya’s backyard.

It’s also a way of quieting skeptics who think that a record is the only determinant of whether a fighter has a chance of winning a particular bout. There are other forms of experience, and Clopton’s last couple years certainly qualify as being character building. And even though he has less than 10 pro bouts, his training partners over the years speak to a fighter with a lot more going for him than eight fights would indicate.

“They think eight fights, I’m a newbie,” he said. “And maybe compared to this guy I am. But I don’t see it that way. I’ve been training since 2005, and when I started training, I was training full-time with good people. Matt Wiman was my first training partner, and then I made the move out here and I’ve been training for six years with Jake Shields, Gilbert Melendez, Nick and Nate Diaz. So I don’t see myself as a newbie in this sport anymore. Plus, along with everything that I’ve been through - leaving my friends, my family, my home, to go halfway across the country to train full-time - that’s a crazy sacrifice that I made, and I think that’s gonna show at the fight. I think all of this has made me a stronger person. I know this guy is up there and I’m beyond an underdog, and I respect his game and his skill set, but I don’t fear him.”

Sounds like Clopton, who now makes his home in San Francisco, won’t be too intimidated by Yahya’s jiu-jitsu game or an arena full of fans screaming for his head. Nor would you expect him to be after what he’s been through.