Josh Barnett - The Warmaster Takes to The Cage Again 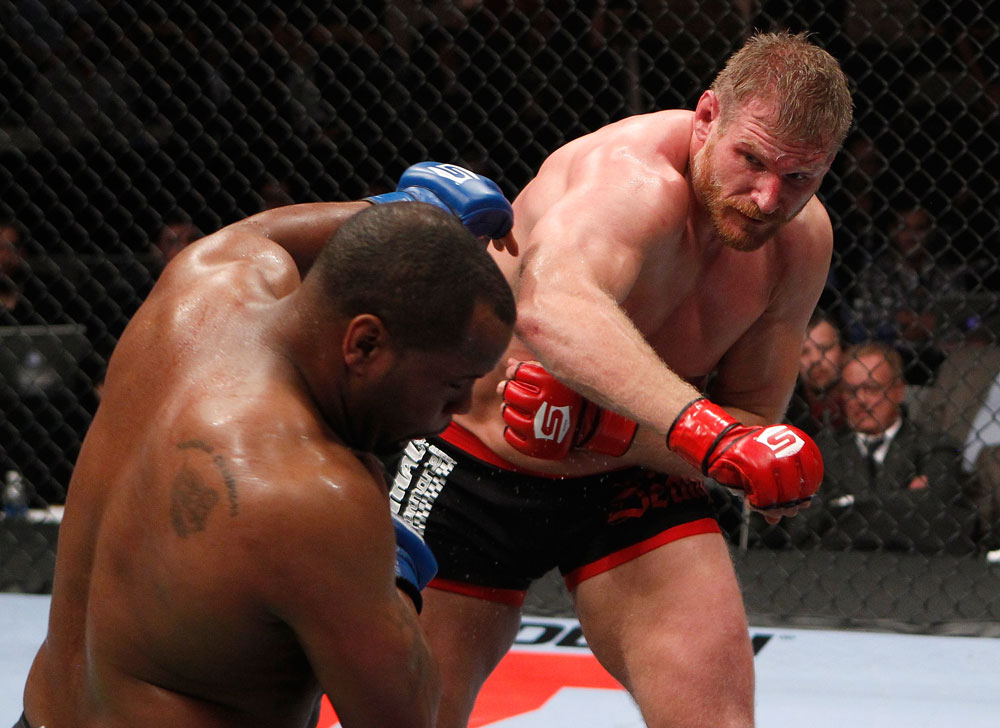 Ronin. The Japanese term came to define a samurai with no lord or master. The word literally means “wave man” or a wanderer; someone who is adrift, socially speaking. For the past 16 years, perennial top 10 heavyweight Josh Barnett has been a fighter for hire with no specific ties to any one organization or even a particular region of the world. With no anchor in place and Strikeforce setting sail to the great beyond, MMA’s global fanbase is huddled together eager to see where “The Warmaster” will battle next.

In particular, will the well-traveled submission specialist return to the UFC’s Octagon?

“I think it would be fantastic,” affirms Barnett. “It would be a great place to fight and put myself up against these heavyweights, some of which are considered to be the best in the world. I would like to test that theory out because I don't think some of the praise that is put on these guys is not just inherited by the organization that they fight in. For me to go over there and wreck shop and rampage all over these guys would be a lot of fun for me personally and professionally. But that's not something that's entirely in my ability to make happen, so we'll see how things turn out. We'll see if the UFC wants the services of a mercenary like myself.”

To think, it is coming up on the 11th anniversary since Barnett last fought inside the eight-sided cage and won the heavyweight championship off of eventual UFC Hall of Famer Randy Couture at UFC 36. As any minor MMA historian knows, Barnett was stripped of the title for testing positive for a banned substance. From there, the then dubbed “Baby-Faced Assassin” took his walking papers to the “Land of the Rising Sun” and became a featured star of PRIDE during their golden era of heavyweights. Specifically, in 2006, Barnett tangled twice with former UFC interim and PRIDE heavyweight champion Antonio Rodrigo Nogueira.

The initial bout took place in the semi-finals of the PRIDE Openweight Grand Prix in September and the rematch was set a few months later for the New Year’s Eve show. They were titanic collisions both physically and symbolically. Physically, both heavyweights stand 6’3” or so, weigh-in at over 240 pounds, pose threats standing, but prefer cranking a limb or a tender neck to victory. Symbolically, it was a match-up of preeminent athletes of contrasting grappling ethos: Brazilian jiu-jitsu vs. catch wrestling. Above all else, Barnett’s loyalty lies with the martial arts path he chose many, many Moons ago.

“I started with [catch wrestling] when I got to Matt Hume's AMC Pankration,” remembers Barnett. “That was the style of submission fighting that was passed onto him from when he was training with all of the guys over at Pancrase. That Japanese heritage that was brought to them by Karl Gotch and Billy Robinson. That was their way to control and manipulate and destroy the human body. I always saw it as an aggressive, wrestling-based, submission style and as a wrestler it fit well with me. I also really liked that it didn't have a lot of restrictions in terms of what was considered kosher and what wasn't. Leg locks, neck locks, finger locks, all kinds of stuff. Being able to submit pretty much any part of the human body.”

Both bouts went to close decisions, with the pair splitting the victories. Each fighter represented their particular style accordingly with some dramatic sweeps and sub attempts when the action hit the floor. This heated schism between submission styles added fuel to the fire for these high profile showdowns.

“I always had a bit of a chip against jiu-jitsu in the beginning,” says Barnett. “So many of the jiu-jitsu guys would scoff or turn their noses up at us. They would be like, 'what's your belt?' And I would be like, 'I don't have a belt in jiu-jitsu.' And they would be like, 'Hah-hah, how could you be any good? If you don't do jiu-jitsu then you must suck.' If there was one thing I've always enjoyed, it's having someone underestimate me or disrespect me to give me that much more of a reason or incentive to not just prove them wrong, but to enjoy the look on their face when you get done smashing them.”

At 35 years old, the Washington native’s chip is still firmly in place for motivational purposes. The most recent battlefield for “The Warmaster” has been Strikeforce’s cage, where Barnett has added two wins and a loss to his wildly impressive overall 31-6 pro MMA career. With gravitas to spare, he made his Strikeforce debut as part of their heavyweight Grand Prix, featuring such notables as former PRIDE heavyweight champ Fedor Emelianenko, former Strikeforce heavyweight champion Alistair Overeem, and Antonio “Bigfoot” Silva, to name a few. As if he was on cruise-control, Barnett coasted to the finals, taking out both Brett Rogers and Sergei Kharitonov with arm-triangle chokes before either had a chance to mount nearly any offense.

In the Grand Prix finals, the Erik Paulson protégé met the undefeated in MMA, former 2x US Olympic team freestyle wrestler Daniel Cormier. It was a full 25 minutes of punches, kicks, knees, elbows, takedowns, and some bruising clinch work. In the end, it was Cormier who won the unanimous decision. The five round war was a coming out party for Cormier, who solidified his place among the elite heavyweights by earning that hard fought victory. For Barnett’s part, he didn’t give Cormier an inch for nearly a half hour of fighting, even when he sustained an injury just seconds after starting.

“I thought that Daniel had a lot more to offer than people were giving him credit for,” reveals Barnett. “I trained very hard to nullify his offense. I really expected to go out there and finish him in three rounds, but after breaking my hand within 23 seconds - I lost sight of the game plan. Basically, I threw a left hook and he yanked his head in a way that just by circumstances and chance it just worked out and I hit it in a bad spot and it broke. I was completely aware I broke my hand. I basically told my corner under my breath that I broke my hand, so that the doctors didn't hear it. I just went on from there. I had a fight to win. We ended up brawling and battling it out. I couldn't quite get the killshot on him to seal the deal.”

Mild irony, Barnett sat out the first half of 2012 waiting on Cormier’s broken hand to heal to only sit out much of the second half of 2012 waiting on his own hand to heal, which he broke on Cormier’s head. “I had my hand ‘surgerized’,” jokes Barnett, who had to have a plate and six screws put into his left hand. “I had a particularly bad one because I had a bad fracture where the bone laid on top of the other. I had also continued to punch with the hand throughout the entire fight. I continued to hit Daniel with it and that caused a lot of tissue damage in the hand. The doctor did a fantastic job and you can barely see the scar.”

Prior to the losing scrap with Cormier, the product of Fullerton, California’s Combat Submission Wrestling Training Center had not tasted defeat since that 2006 decision loss to Nogueira and was riding an eight fight win streak, including seven finishes. “I think every fight presents plenty of data that if you look at yourself and you're able to remove any emotion from that then you can learn quite a bit; I would have to be a fool to not take something from that fight and not make me a better fighter in the future.” While on the cusp of entering his 16th year as a professional, he still believes he’s capable of competing at his best ability. “I don't think people should give up their athletic pursuits until they must. I know that there are a lot of things about me as a fighter now that I think are improvements. I know that is still ultimately possible for me to be in maybe the best shape I've ever been in or feel better.”

Up next for “The Warmaster” is a Saturday tussle with Nandor Guelmino. The burly Austrian with an 11-3-1 record may not be a well-known commodity like Barnett, but “The Hun” will have the chance to pull off the upset in his Strikeforce debut, which is also the organization’s final event. It’s an opportunity for Guelmino to mark his United States debut as well as taking on easily the most dangerous and famous opponent of his five year career. Having faced and beaten 6’11” kickboxers to 5’9” grapplers and everything in between, Barnett doesn’t expect any surprises from his foe.

“I have seen his fights or what's available,” states Barnett. “I know what to expect. I don't worry about what he brings to the ring. I've seen so much out there in the world, in the cage, and in training that it doesn't really affect me at all. I'm not really worried about it all. I only worry about how to inflict what I do upon him.”

This Saturday at the Chesapeake Energy Arena in Oklahoma City, Oklahoma, “The Warmaster” is ready and waiting to draw swords with “The Hun”. “If you don't know anything about me, I'm going for the finish,” asserts Barnett, whose 26 stoppages (19 sub, 7 TKO/KO) over his remarkable career are one of the best examples that catch-as-catch-can is a winning art, no matter where or whose cage it’s in. “I'm going to take this guy out. When I smell my blood, I tear open the wounds and dive right in to make my kill.”