Josh Barnett: 'I Show Up to Fight' 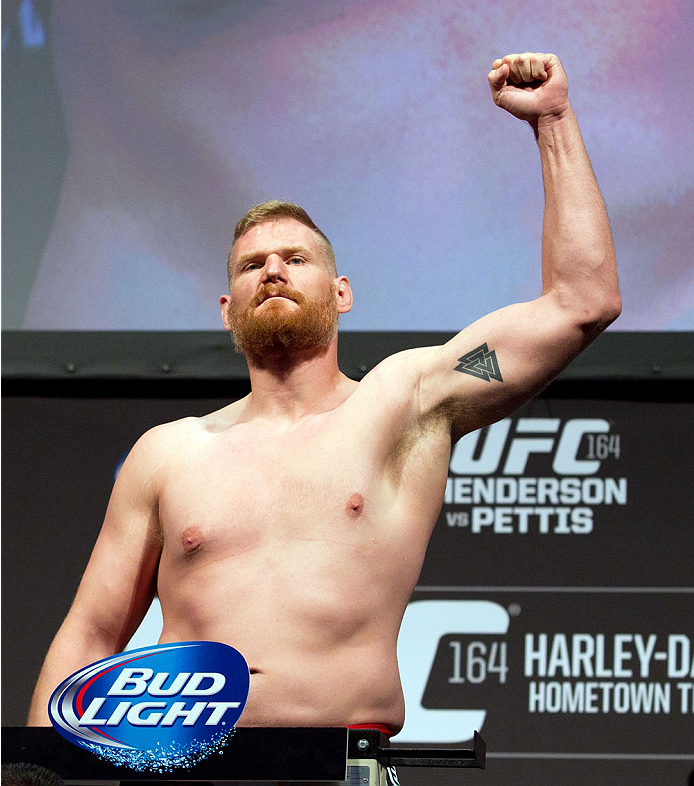 Who said the following incredible quote?

“I've been in the game for a very long time, but I have not diminished over the years - I've only gotten stronger and meaner.”

It’s the latter, and he’s back… with a vengeance.

Eleven years and well over 100 UFC pay-per-view events later, the near ageless Barnett is still punching faces and taking names inside the Octagon, pretty much right where he left off. A few things have changed, like the addition of a grizzly beard and a more epic nickname, “The Warmaster”, but one thing in particular has remained the same: Barnett is a proven fight finisher. In his first UFC stint, the then “Baby-Faced Assassin” went 4-1 with all victories by stoppage. Fast forward a decade to Barnett’s return in August, another first round TKO finish of a top 10 opponent in just shy of two minutes.

Marking his return to the premier fight organization he once held the coveted belt of, Barnett was on a mission when he clashed with fellow former UFC heavyweight champ Frank Mir at UFC 164. “To go out there and destroy him fast, just like always,” says Barnett, who steamrolled Mir into the cage and, eventually, to the floor, enhancing his pro record to a staggering 33-6 including 28 finishes (10 KOs, 18 submissions). On paper, many expected these extraordinary grapplers to trade armbars instead of elbows, but Barnett’s striking against the fence was simply too effective to allow for any vaunted mat work.

“I never know exactly how the fights are going to go or how tough it's going to be,” discloses Barnett. “I knew what skills I already have and what I thought would do well against Frank. We trained for some of his habits. We just implemented a game plan of making it a brutal, right in your face fight right from the get-go and not give him a chance to relax. It never came to using the other stuff we worked on, but it was a full-spectrum game plan that had a lot of answers for any potentialities. It just went the way that it went and that was great.” > Watch: Barnett shows off his muscle cars

The co-main event heavyweight bout was short, ugly, and impressive as Barnett bum-rushed Mir, got his paws on him, delivered some dirty boxing, and dropped and stopped Mir with a few knees to the head. “The Warmaster” has been putting together wins similar to this all around the world since 1997 and knowledgeable fight fans have had Barnett highly ranked this whole time. For many of the ever-growing Octagon audience, the stomping of the popular Mir, a heavyweight who fought for the UFC strap only a year prior, was a truly eye-opening experience about an older new force in the division.

“I have had people stop their cars while I've been walking down the street and they just start screaming at me,” tells Barnett. “At first I'm thinking, 'oh boy, how's this going to go?' And then they're like, 'Hey man, you kick ass! I saw your fight!' That works for me. It's been an unusual thing and I didn't get into this whole thing for anything like that. I realize it is a component that comes with being an entertainer.”

Up next for Barnett and his new devotees, a heavyweight showdown at UFC 168 this Saturday 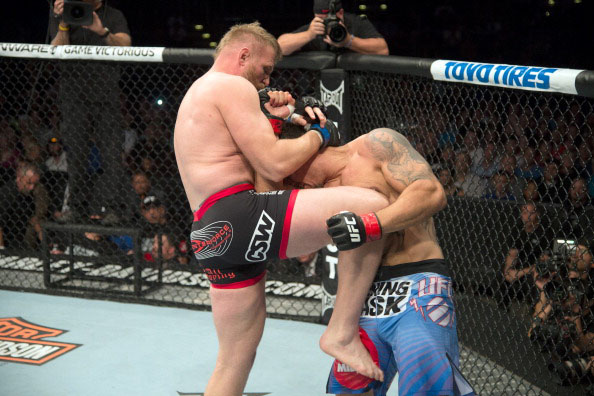 against the heavy-handed Hawaiian Travis Browne. The agile 6’7” rising star from Team Jackson-Winkeljohn has rebounded with authority from his one and only loss last year to Antonio “Bigfoot” Silva with back-to-back first round Knockout of the Night performances over Gabriel Gonzaga and Alistair Overeem in 2013. At 15-1-1 with only two of his Ws via decision, Browne matches up quite nicely with Barnett in terms of exciting stopping power. Obviously, it’s a bout with both fan-friendly fireworks potential and #1 contendership possibilities.

“It's a big fight,” affirms Barnett. “It's a big fight for the UFC and the heavyweight division. I'm glad to have a guy coming off a big win and a strong up and coming challenger to get into the ring with. He's a real athletic striker, very mobile. That can be very difficult for most heavyweights to deal with, but I'm a very well-rounded fighter and pretty mobile myself. I think it would be fair to see that the grappling and wrestling goes in my favor, but it's all about execution. You don't want to let a guy like that tee off on you, that's for sure. It's going to be an explosive fight and I know I'm not going to let this go the distance. That's just not in my nature. No matter what, someone is getting finished.”

At 36 years old and heading into his 40th professional fight, Barnett’s an anomaly both in the length of his career and the sharpness of his skills. Some veteran fighters become limited or allow themselves to be limited as the years pile on, but if anything, Barnett could be more dynamic now than he ever was before. On the ground, Barnett’s arm-triangle choke netted him all three of his wins in Strikeforce from 2011 to 2013. On the feet, Barnett mixes strikes from long range to the clinch with power and precision.

Younger by the Fight

What’s the key to Barnett’s fountain of youth in fighting? > Watch: Barnett in the Gym

One could guess continuing to evolve as a fighter has to do with never allowing one’s training to get stale. In Barnett’s case, this rolling stone doesn’t get the chance to grow moss as “The Warmaster” still trains with his original crew of Erik Paulson, et al at CSW in Fullerton, California as well as adding people, places, and things to the workout regime. Specifically, leading up to the bout with Daniel Cormier in May 2012, Barnett began rolling with the Air Force Academy wrestling team in Colorado led by three-time NCAA Division I All-American, 1994 National Championship winner, and two-time US Olympic Team wrestler Joel Sharratt. 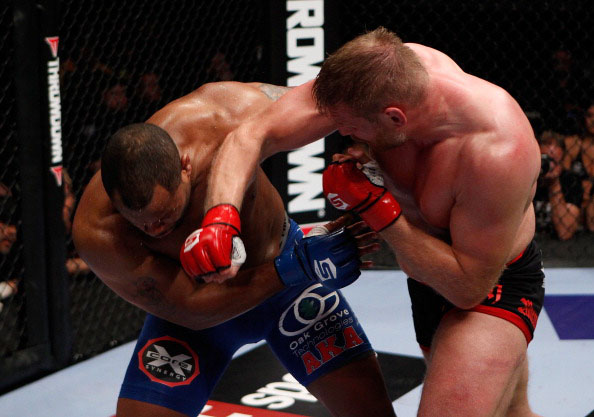 “My training partner Erik Hammer’s high school wrestling coach had a relationship with the Air Force's head wrestling coach Joel Sharratt and he had the idea of going out there and training with him,” explains Barnett. “He was real jazzed up about the idea, so we started to make it happen. We started before the Cormier fight and we've been doing it ever since. We get a chance to train at altitude and with coach Sharratt. It's a fantastic experience. He's got a fantastic concept of drilling practice and conditioning and getting down and dirty and drilling those skills home. I think it makes me a better wrestler and a better fighter every time.”

No stranger to the “sweet science”, Barnett has been busy traded knuckle sandwiches with some of the best and brightest boxing has to offer at Henry Tillman’s Boxing Club in Carson, California. When it comes time to lace up the gloves, Barnett is either learning from the 1984 US Olympic team heavyweight gold medalist Tillman himself or another famed boxing coach, Jamal Abdullah. As far as who he is punching and getting punched by, Barnett spars with undefeated heavyweight “Prince” Charles Martin, IBA Americas heavyweight champion Joe “The Future” Hanks, and a litany of tall, bruising pro boxers.

“We hit each other hard,” asserts Barnett. “I can box. When I'm not just doing rounds for myself then I'm helping Charles out. I'll give him specific looks and try to do things to help him out because he's my sparring partner. It's just a great working relationship. When we get in there, we throw down. There's just no way to avoid the pure fact that when a guy like Charles, who is 6'5" and 240, drops a punch on you, it's going to have some force behind it. You get used to it. You also get used to realizing that I can take that shot to the face or how about I try not to because that would be a better idea. It would be better for my overall well-being. Boxing is a way different pace and a different skill set, but it's a high pace and it makes you sharp and puts you in the fire. It's not a new thing for me. It's just a good environment, training's going great, and having that wealth of up-and-coming young tough heavyweight boxers around is great.”

Showing Up to Fight

Lastly, when “The Warmaster” isn’t fighting, he’s coaching others to fight. Wrestling isn’t new to Barnett nor is striking, submitting, or coaching. Barnett has been a familiar face in other cage corners, especially for female fighters like The Ultimate Fighter 18’s Shayna Baszler or recently retired Japanese legend Megumi Fujii. Nowadays, Barnett’s stable consists of UFC hopefuls like undefeated bantamweight Victor Henry, 5-3 Colleen Schneider, and Shohei Yamamoto, a Kyokushin Karate standout who is making the transition to MMA. > Watch: Barnett 1-on-1 with Jon Anik 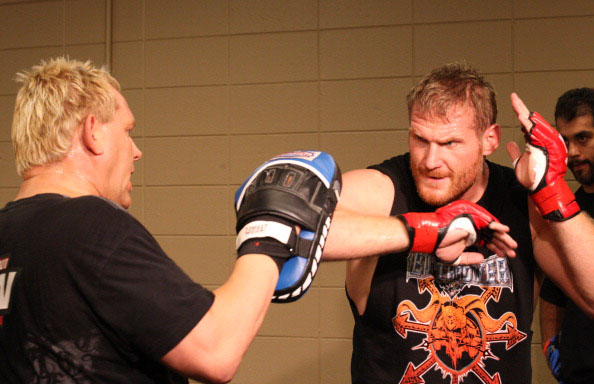 perspective,” reveals Barnett. “It makes you be more aware of your own habits and your own techniques that you're trying to impart on these people. You can't just tell them to do it 'because'. You want to give them a step-by-step explanation for them to really understand it. Plus, to have the eye to break down what they're doing wrong or what improvements they need to make, it helps when you apply that to yourself.”

This Saturday, heavyweights on hot streaks will collide as “The Warmaster” sets his sights on Browne. “I don't show up to compete, I don't show up to play a game - I show up to fight,” declares Barnett, who has been in the game long enough to know how to make it the fight that brings the fans to their feet and for him to win.