Joseph Holmes' Ability To Balance Expectations Both On And Off The Mat Has Made Way For His 'Perfect' Journey To The Octagon
By Thomas Gerbasi, on Twitter @TGerbasi • Jan. 14, 2022

All it takes is a look at the fights that made up Joseph Holmes’ 2021 campaign and a conversation with “Uglyman Joe” to realize that in a sport where the ability to handle “everything else” can be the difference between being a superstar and just another fighter, he’s got the goods to make some noise in the UFC’s middleweight division.

“This is what I want,” said Holmes, unbothered with all the paperwork, photo shoots and media obligations before his Octagon debut against Jamie Pickett this Saturday. “I want all this, for sure.”

For want of a better term, Holmes epitomizes cool in his approach to the sport and life. That’s a rare gift, but not one he always had. 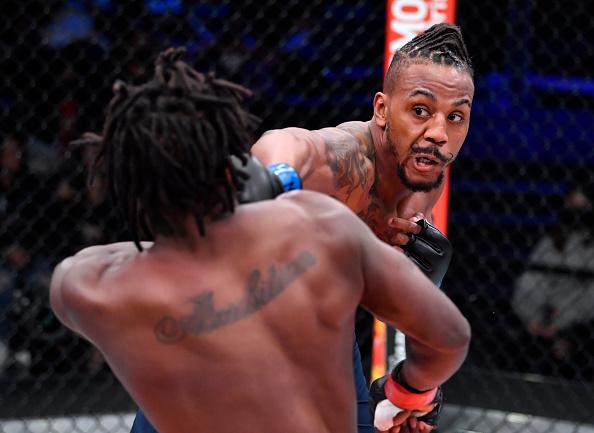 “I started off a loser,” said the Alabama native. “Before ever fighting, before ever playing high school football or college football, I was just a shy loser who didn't have many friends, who didn't want to go outside and didn't want to experience anything. I just wanted to hide behind my video game and hide from people's opinions. It took a lot for me to have to come out of that shell and realize that I had things that could benefit me as a person, like athletically, and things I was gifted with that some people have to work for. So I just think experiencing that alone helped me realize that I could continue to get better, even now, getting to the highest level.”

A 6-foot-4 defensive lineman for Arkansas Tech University, Holmes ultimately turned to jiu-jitsu, then MMA, where he lost his pro debut in March 2019 to Jordan Newman. In a sport like boxing, that could be a death sentence for your career if you’re not named Bernard Hopkins. But in MMA, Holmes knew he wasn’t destined to be a B-side forever and, coupled with some coaching that took him off his game in the fight, he shook off that defeat and moved forward.

Less than four months later, Holmes was back in action and he scored a second-round submission win over Kona Oliveira. Two more wins followed, and Holmes entered 2021 with a 3-1 record and some lofty ambitions for the year."And that's something that I hadn't experienced before until that fight, and it made me hesitant and made me doubt myself. I knew immediately after the fight was over that he won, but I wasn't hurt, and I wasn't defeated or anything like that. I was disappointed that I did hesitate, but I knew why, and I just got back to training and fixed my mistake. Okay, if he's a better grappler, I need to become a better grappler.”

“The whole goal was to get into the UFC from the type of year that I could have,” he said. “And I pretty much did that. I had four fights, four finishes, and that was my goal - do that and I'll get into the UFC. So, I guess one word I could use to describe the year was ‘perfect.’ It was what I was supposed to do, I did it, and now I got the end result I was looking for, so I need to have another year just like that.” 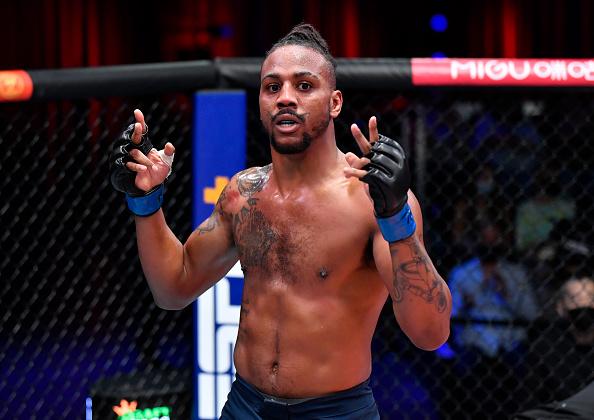 Last October, Holmes won his fight on Dana White’s Contender Series, submitting Shonte Barnes in the second round. He didn’t get a UFC contract that night, so he returned a month later and halted Jhonoven Pati in less than three minutes on the Dana White: Lookin’ for a Fight show. That earned him his contract, which he breaks in against Pickett this weekend. That’s a lot to take in for someone with just eight pro fights, but the 26-year-old is not rattled in the slightest.

"So I think I got here at the right time, I'm feeling really good, I'm training with some really experienced people in the UFC (at the Glory MMA gym), and I'm ready to get to the top. It's not gonna be easy. I'm gonna have to train hard, I'm gonna have to face tough opponents and find a way to win, and I'm gonna have to get better as I go. And I feel like that's something I proved last year that I can do.” 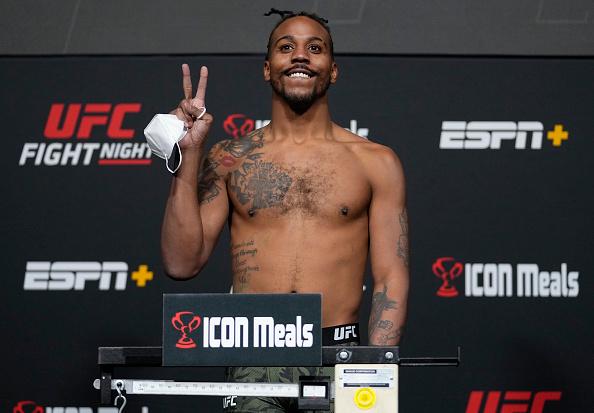 Joseph Holmes poses on the scale during the UFC Fight Night weigh-in at UFC APEX on January 14, 2022 in Las Vegas, Nevada. (Photo by Jeff Bottari/Zuffa LLC)

See, cool. Only the letters on the gloves have changed.

“The stakes are still the same, I'm still fighting the same type of opponent, and he's no different than anyone else I've faced,” said Holmes. “He hasn't been doing too well lately, and I've been on a tear, so my momentum's going way too strong for him to stop me. So no, it feels the same. But it is a lot more exciting, and I'm getting paid more as well, so that's really awesome.”