Joseph Duffy: A Star in the Making 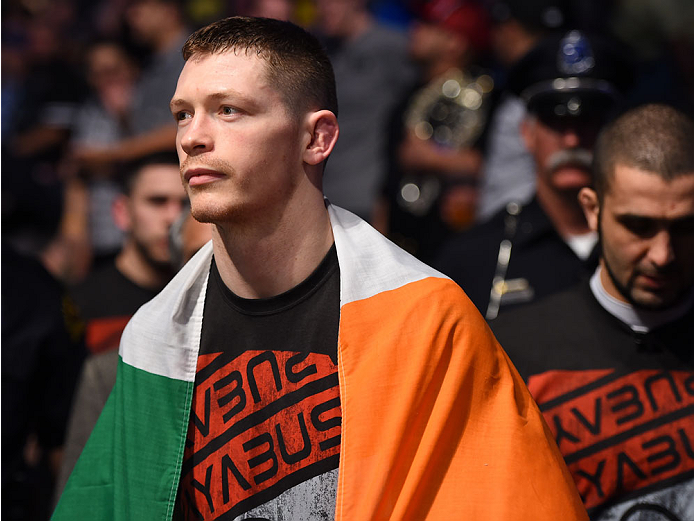 It’s the curse of the hot prospect. One spectacular win in the UFC and all of a sudden everybody wanted to see “Irish” Joe Duffy fight everyone. But it was just one fight, and as good as the Donegal native looked, he’ll have to be patient before facing off with the best the lightweight division has to offer. How does he manage to do that?

He did look pretty damn impressive in that debut, though, as he took less than two minutes to end Jake Lindsey’s night via TKO back in March. It was Duffy’s 13th pro win against a single defeat, and as he describes it, the secret to performing with no sign of the UFC jitters was a simple one.

“In the morning I was a little bit nervous when I woke up,” he admits. “But then I had a bit of a nap, I woke up and then I was good to go. (Laughs) These days I don’t tend to get that nervous. I’m happy with my life and I don’t put all my eggs in one basket, I suppose. I don’t think ‘if I lose this fight, it’s the end of the world,’ because it’s not. I’m going to go in, show the world what I can do, and if it’s not enough on the night, all credit to my opponent, they deserve to win.”

One conversation with the 27-year-old and you can tell he’s an even-keeled athlete who doesn’t get too rattled by much. He’s also not one to make a lot of noise before his fights, which made the class he showed before the Lindsey fight even more impressive. And no, Lindsey wasn’t dishing out a barrage of trash talk in the Irishman’s direction, but it seemed like every pre-fight interview focused on one tidbit from Duffy’s past: that he was – and is – the last man to beat Conor McGregor. It was almost like Duffy had to talk more about the current interim featherweight champion than about the man who was trying to punch him in the face on March 14, but he took it all in stride, went into the Octagon, and did his business.

“Ideally, that’s what you want to do in every fight,” he said. “You want to make a statement and show exactly what you can do. But I think for me, I made the mistake when I first came back to MMA – I put too much pressure on myself and I tried to make a big statement, and I found that when you try too hard, things don’t tend to work out how you want them to. This fight, I didn’t put any pressure on myself, I just went in there and concentrated on getting the win. And I always feel that when I go in there and do that, it brings the best out of me.”

Duffy has been very good for a very long time, with his early wins over McGregor and Norman Parke making him one of Europe’s top prospects. But after a 2011 loss to Ivan Musardo, the first (and only) defeat of his career, Duffy kept his mouthpiece in but traded his vale tudo gloves for some bigger ones, as he entered the world of pro boxing. Not surprisingly, the Irishman was as successful in the ring as he was in the cage, building a perfect 7-0 record in the sweet science. But by 2014, he was competing in MMA again, where you can probably expect him to stay.

“I didn’t really have the same passion for boxing that I did for MMA, and I felt that down the line, that’s going to be a big factor,” he explains. “With MMA, I’ve been doing it since I was a kid and I’ve always wanted this since I was a kid, and I feel that when it gets into a tough fight when you’ve got to dig deep, I think the person who wants it more, that’s when that plays a big part. In boxing, I didn’t really want that, so that was the main reason for me.”

Another reason had to do with the purely physical.

“When I was boxing, I was suffering heavily with my hands,” he said. “I was picking up hand injuries in pretty much every fight, and obviously, only being able to punch, it definitely made me appreciate MMA more, when you’ve got more options.”

Since returning, Duffy is 3-0 with three finishes as he enters a Saturday bout in Glasgow against Brazil’s Ivan “Batman” Jorge. Given his resume and victory over Lindsey, he will be the favorite, but he still trains like an underdog far from home in Montreal’s Tristar Gym. If that doesn’t show his level of dedication, nothing will, as leaving his girlfriend and his family behind is a sacrifice not a lot of athletes would be willing to make.

“It’s always gonna be tough,” he said. “I’ve already kind of done it when I first left Wales (where he was raised for most of his life) and moved to London. I was moving away from my family and I suppose that prepared me for this, and then obviously moving over here, I’m away from my girlfriend as well. So that’s tough. But I’m very grateful for the support I got from my girlfriend and my family, and they know I’ve got to give it a hundred percent, trying to achieve my dream. And a hundred percent it was the right move. Every day, every week, every month, I can see such a difference training here at Tristar, and that’s due to the training partners and the coaching staff I’ve got here.”

Duffy’s good. He may even be great one day. But how does one beat Batman?

“To tell you the truth, I just feel like I’ve got the tools everywhere. I just believe I’m the better fighter.”