Joseph Benavidez - Time to Trade in the Polaroid

"I’m trying to separate myself from every fighter in the world and
establish myself as one of the best fighters in the world." - Joseph Benavidez 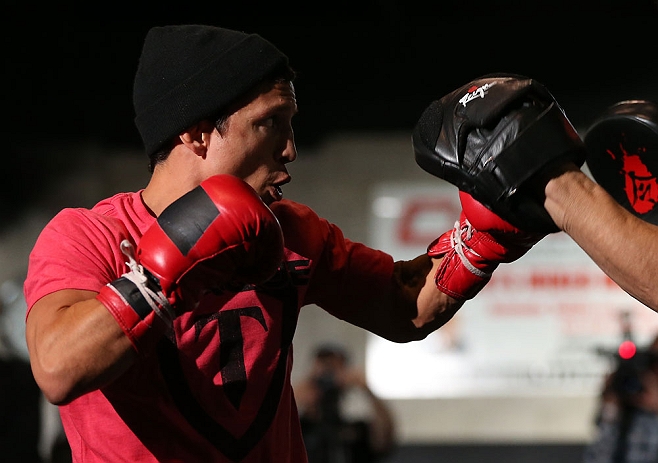 One item on the mantle in Joseph Benavidez’s house stands out from the rest. Amidst the family photos and personal totems you’d find lining the mantle in anyone’s house rests a Polaroid – a 4x6 photo of a UFC championship belt.

“Everyone comes in and they’re like, `Why do you have a picture of the belt up there?’ and I’m like, `I’m just waiting on the real one,’” laughs the Las Cruces, New Mexico native. Benavidez doesn’t have to wait too much longer for the opportunity to replace his prized Polaroid with the real thing.

Saturday night at the Air Canada Centre in Toronto, the 28-year-old will square off with Demetrious “Mighty Mouse” Johnson in the final bout of the four-man tournament to crown the inaugural champion in the UFC’s newest division.

Pundits predicted Benavidez would find his way into the final pairing in the flyweight tournament. The former WEC star is regarded as one of the top pound-for-pound competitors in the sport, having amassed a record that he describes as “16 and Dominick Cruz.”

While mathematical errors forced Johnson to battle Ian McCall for a second time in order to advance to this stage, Benavidez punched his ticket to the finals with a blistering second-round knockout win over Yashuhiro Urushitani back in March. It was the kind of display that showed why many tabbed him to win the tournament when it was initially announced, and just how much of a difference moving ten pounds down the scale has made for the Team Alpha Male representative.

“I had adjusted my life to fight at 135, but it wasn’t the best I could be,” admits Benavidez. “I always had to compromise something at 135, in both my lifestyle and as a fighter.  At 125, I don’t have to make any compromises with my style. I can go out there and literally be the best fighter in every aspect of the fight, and that’s what makes the champions of the weight class better than everyone else in the division; they go in there and fight how they want to. This is definitely the weight class I’m supposed to be in.

“I feel stronger. I feel perfect, and the weight cut actually helps – it brings a certain discipline to my life and to my camp that I didn’t need at 135. I always worked as hard as I could, but I didn’t need to be disciplined in my diet and focused on that realm – getting in the runs, getting the diet right, making sure everything is on point. I rocked Eddie Wineland, and rocked Ian Loveland, but they wouldn’t go down. At this weight, if I hit someone, they fall.”

Moving down in weight is certainly the most visible change Benavidez has made in his career, but there was an important shift that occurred prior to his departure from the 135-pound ranks that has been paying dividends as well.

The flyweight title hopeful was spending a great deal of time in Las Vegas, and began working with the late Shawn Tompkins prior to making his UFC debut. “The Coach” passed away unexpectedly the same day that Benavidez used what they’d worked on to earn a unanimous decision win over Wineland, his second consecutive win inside the Octagon, and fourth straight victory following his split decision loss to Cruz in their second encounter. From there, Benavidez connected with respected Muay Thai coach Shawn Yarborough, who in turn introduced him to the tandem of Jimmy Gifford and Ricky Lundell. He’s been working with them ever since.

“I had met Shawn Yarborough down in Brazil. I told him I was in Vegas and that I would like to train with him. He introduced me to “Giff,” who introduced me to Ricky Lundell, and I was hooked right away. These guys are amazing trainers. I hadn’t seen the coaching like these guys were doing – mixing MMA with wrestling and jiu-jitsu.

“Our team is very unique because we don’t have a head coach at Team Alpha Male; different people run practice every day,” explains Benavidez. “We have our routine for a warm-up, then someone will show a technique that we should work on, and someone will run us through it. There’s not really a head coach telling us what to do. I can do that all throughout training, but now when I get down to these final weeks, I’m in amazing shape, I’m ready to go five rounds, but I need to put in the little, fine details, and that’s really where a coach or coaches come in and help me.

“I’m fighting for a world title. I haven’t been a champion yet, and when you’re looking to become a champion, you have to do things that you haven’t done before. You have to do stuff that other people aren’t willing to do. You have to do whatever it takes, so if I feel something can help me for this fight, I’m going to do it. It’s been amazing thus far having Ricky and Giff out here helping me for the fight. I got here with my training partners and working hard, but I want to take it to the next level. I want to do everything it takes to do that, and if there is something that can help me, I’m going to do it, and this has definitely helped me.”

Saturday’s meeting with Johnson is invariably the biggest fight of Benavidez’s career. Though he went five rounds with Cruz for the WEC bantamweight title in the main event of WEC 50, this time it’s a UFC title at stake, as well as a permanent place in the organization’s history. While the magnitude of the moment is certainly not lost on him, Benavidez instead views his UFC 152 championship co-main event match with Johnson as an opportunity to achieve one of the goals he set out for himself at the start of his career.

“It’s another fight, and I have to think like that. I can’t let the pressure get to me as much as I let it inspire me. I don’t try to look at it like I’m making history and let that freak me out as much as I let it inspire me and remind me why I’m doing this. When I got into this sport, I wanted the limelight, the main event, and the world title. That’s everyone’s goal in this sport; everyone wants the main event, the recognition, the world title, and now I feel like this isn’t pressure – this is where I’m supposed to be. This was my plan, this is what I’ve worked for, and this is what I deserve.

“I look at it as I set a goal, this is what I wanted, and now it’s happening,” continues Benavidez, his speech quickening, reflecting the excitement and energy thinking about this weekend’s bout sends coursing through him. “The journey (from Las Cruces, New Mexico) just makes it that much sweeter. It’s been a rough road, and it’s been hard work, but that makes it even sweeter. I just think of everyone who has helped me along the way, and supported me throughout life and my career, and think this is for them. This makes my family happy. This makes the people that support me happy. This is what I planned for, and this is why I did everything I did. This is why I go to the gym at seven in the morning and leave at seven at night. This is why I go that extra round. This is why I didn’t go out that one night. This is why I’ve made all those sacrifices.”

This is also an opportunity for Benavidez to bring UFC gold home to Team Alpha Male, and the possibility of succeeding where his teammates came up short earlier in the year only serves as further motivation. Having answered questions about being overshadowed by teammates like Mendes and Faber throughout his career, Benavidez wants to make it perfectly clear that this isn’t about trumping his teammates’ accomplishments or emerging from their shadow – it’s about winning for the team, and establishing himself as one of the elite talents in the sport.

“It’s not me trying to separate myself from anyone on the team; I want a belt for our team as well, and that’s going to mean a lot to me. We’ve had the two shots (this year), and it’s going to mean a lot for me to be the one to bring it home, and let everyone know that at Team Alpha Male we have a world champion.

“I’m trying to separate myself from every fighter in the world and establish myself as one of the best fighters in the world. There are only a select few who can be UFC champions, and I’m going to be one of them. Chad and Urijah having fought for titles, win or lose, it was motivating for me. Unfortunately they lost, and now I need to do this for us, for the team. I believe all of us here have had or will have our moment in time, and this is just my time.”

Just as he put a Polaroid on his mantle to represent the championship belt that would one day rest there, Benavidez has thought about winning Saturday night. He’s thought about Bruce Buffer announcing him as the first flyweight champion in UFC history while Dana White wraps the title around his waist in the center of the Octagon. In fact, it’s the only thing he thinks about.

“I’ve looked at (the Polaroid) every day that I’ve been in the UFC, thinking about taking down that piece of paper and replacing it with a real, shiny belt. That’s something I’ve been visualizing from the beginning, knowing that picture is just there until I get my belt. Just the thought moves me, so I can’t imagine how the dream becoming a reality is going to feel.”