"When I fight a guy, what I think about is beating him worse than any of the other guys, including DJ or whoever else it may be." - Joseph Benavidez 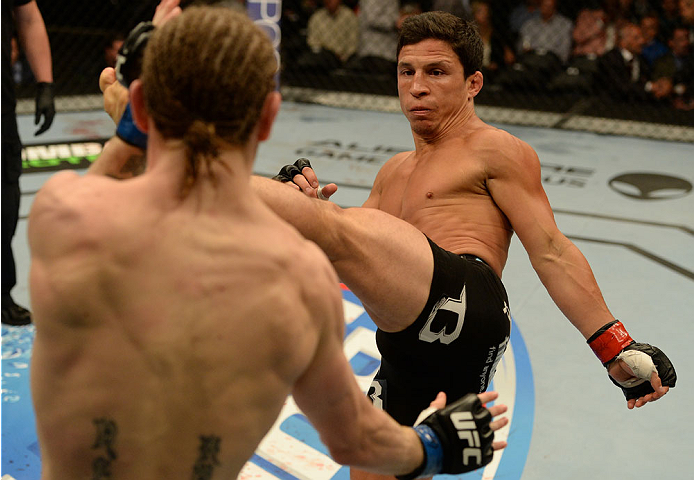 After fighting four times in 2013, Joseph Benavidez has only stepped into the cage once this year, picking up a first-round submission win (and Performance of the Night bonus) over Tim Elliott back at UFC 172 in April.

“I’m sure I would have gotten a fight earlier if I wasn’t in the position that I got myself in by losing twice to the champion, but apparently that’s just a position I love. I’ve been there twice,” Benavidez, whose four career losses have come against just two fighters – former bantamweight champ Dominick Cruz and reigning flyweight titleholder Demetrious “Mighty Mouse” Johnson, deadpans.

“I loved last year and that’s kind of what I’d like to do for the rest of my career. I thought it was awesome and they all fit perfectly – from McCall to Uyenoyama, Formiga and the title fight. It’s no secret we can only do this for a short amount of time, so I want to get in those fights.”

Benavidez is no stranger to this position though, as his four-fight year in 2013 stands as the outlier in a collection of years with just two appearances since the Team Alpha Male talent arrived in the UFC at the beginning of 2011. In previous years, a lack of fights produced frustration and ultimately hindered his performances once he did hit the cage, but this year has been different.

Rather than embarking on a lengthy road trip or jet-setting to exotic locales during his down time, the man with multiple nicknames and a tie-dye belt in the art of Joe-Jitsu has remained in the gym. Now set to return to action opposite Dustin Ortiz as part of this weekend’s UFC Fight Night: Edgar vs. Swanson fight card in Austin, Texas, Benavidez says his skills have never been sharper.

“Between April and November is when I feel that I’ve made the biggest gains. Not having that pressure of a fight and getting hyper-focused on one opponent or a date or anything, I could really just train with an open mind. Those weeks after my fight, I got right in there and started working with Duane (Ludwig), and now that we’ve got Martin Kampmann, I’ve made trips to Vegas.

“You can use it and enjoy it for the time off that it is – not train, eat whatever I want, train whenever I can, vacation, do this and that – but I don’t have a lifestyle like that,” Benavidez, who carries a 20-4 record into his matchup with Ortiz on Saturday night, continues. “Training is what I like to do. I don’t have an offseason. Some guys, when they have a long break like that, they use it as an offseason, but I just approach it differently.

“This isn’t time off for me to not train and take a break; this is time off for me to train and get better. If I want to skip a sparring day and not get punched in the face? Cool, I can work something else, but it has been great to just train like that and help all the guys with their fights in between. I feel like I’m a completely different fighter, technically. I feel I’ve made the most of this time off. I’ve just been getting better every day.”

Having already lost to Johnson twice, Benavidez knows that the road back to another championship fight is longer for him than anyone else in the division as long as “Mighty Mouse” remains on top, but he hasn’t let his current situation change his overall outlook and career ambitions.

A big part of that comes from having seen how teammate and mentor Urijah Faber has handled being in a similar position throughout his UFC run.

Despite a trio of losses in championship fights, “The California Kid” is perpetually positive, focused solely on the future, not past results. And though fans and critics declare each championship setback his last chance to challenge for UFC gold, year after year, Faber strings together a series of impressive performances and gets himself right back in the mix.

“If you see Faber, every day, no matter what, he’s plugging away. He puts in the work, stays consistent and that’s how it is in a fight. You can’t control the results, but he’ll be damned if he’s going to stay down there and not work harder.

“He’s so positive, even after a loss. He looks at what’s in front of him. When I see him in the gym working his tail off, earning title shots year after year, I know that could be me as well.”

For the time being, however, Benavidez has been forced to recalibrate the way he looks at his fights. Each contest has become an opportunity to one-up his fellow flyweights – a chance to show that he’s the most dominant force in the division by picking up stoppages and manhandling opponents others have struggled with in the past.

That’s exactly how things played out with Elliott when the two shared the cage at UFC 172 and it’s how he envisions things playing out this weekend against Ortiz as well.

“When I fight a guy, what I think about is beating him worse than any of the other guys, including DJ or whoever else it may be. That’s why I loved fighting a guy like Tim Elliott. This guy had fought John Dodson to a super-close fight, Ali Bagautinov to a super-close fight – both of which he could have won – and those guys didn’t finish him. Seeing what he’s done against two top guys like that gives me extra motivation.

“Ortiz is a good fighter that has competed with some of the top guys in the world, but not me,” Benavidez, citing his opponent’s previous encounters with current contenders John Moraga and Ian McCall, continues. “He’s up-and-coming, fought some tough guys, but he’s never really been beat up. He also never goes out and just devastates anyone either. He goes out and it always looks like a split decision; he hangs in there.

“I want to go in and not let him hang in there. I want to make it a one-sided fight. I want people to think `Oh wow – that guy’s tough, he’s fought some super-close decisions in the UFC and Benavidez just terrorized him.’ Yeah, it’s not for the belt, but I can make a statement that other contenders can’t do what I did to that guy.”