The long journey to a UFC title got a bit longer with a disappointment in Norfolk, but Joseph Benavidez remains steadfast in his chase for the belt.
By Zac Pacleb, on Twitter @ZacPacleb • Jul. 17, 2020

Joseph Benavidez isn’t one to believe in destiny. The notion of something being “meant to be” doesn’t align with Benavidez outlook, and in the fight game, that’s arguably an ideal mentality to carry around as the ups and downs take their toll on a mixed martial artist. But with that said, it was hard to not sense the coronation vibe around his third title shot in February 2020 against Deiveson Figueiredo.

He was riding a three-fight winning streak, including two Performance of the Night-winning finishes. Henry Cejudo, whose last loss came to Benavidez, vacated the title, ending the holdup in the division’s title picture. Although Figueiredo was a worthy title challenger, he weighed in above the 125-pound limit, meaning only Benavidez, who unsuccessfully challenged for the flyweight belt in 2012 and again in 2013, could walk away with the belt if victorious. It just made sense, and it made sense to Benavidez too.

“I remember times when I was like, ‘Oh, is this why people say that crap?’” Benavidez told UFC.com. “Because this is how it feels. You hear these people have these incredible, successful events whether it’s whatever kind of championship and saying it’s meant to be, and I was just like, ‘Oh, I’m going through that right now. This is crazy, just the way it feels.’ Everything was perfect. Even when he missed weight, it didn’t shake me. Nothing could shake me that whole week. I was like, ‘Yeah, that’s fine. I’m going to beat him anyway. He was never going to win the belt.’ This sport is crazy.”

One round into his bout in Norfolk, everything relatively stuck to script for Benavidez. He came out aggressively and scrambled out of a deep armbar attempt to take the first frame on all the judges’ scorecards.

The second round started similarly as Benavidez upped the pressure on what he believed was a fatiguing Figueiredo. As Benavidez ducked and threw a pair of hooks, his head clashed with Figueiredo’s. No more than five seconds later, Figueiredo flattened Benavidez with a straight right. The night ended with Figueiredo’s hand raised, the flyweight title still vacant and Benavidez’ title-fight record dropping to 0-3.

“I was in shock after because it’s tough when you start believing in all this great stuff happening and doing everything right, and then it doesn’t go right. It was really hard, but it was one of those things where everything was going right. I won the first round. You don’t abandon those things. You don’t abandon the positivity and stuff, but there’s just another reassurance that you still have to do everything, and you only have a chance in this sport, no matter how good you feel.”

The bout’s conclusion held an air of controversy, though. The clash of heads preceding the final blow left a gash on Benavidez’s hairline, and while he admits he “could’ve reacted better,” he believes the collision rocked him significantly.

In Figueiredo’s eyes, the clash was Benavidez’s fault, but regardless, because the result left an empty throne, most felt the most logical next step was to run it back.

For the fourth time in his UFC career, Benavidez was granted a title shot. This time, on Fight Island.

“It’s nice when the right thing happens,” Benavidez said. “It’s nice to get respect from the media, from your peers, from your bosses. That stuff always feels great, so it was more about just paying attention to that and knowing what I deserve, how hard I worked to get there in the first place. To me, at the end of the day, it’s the same fight. Let the fight actually take place how it was supposed to. Even for me, for the fans, whether they like it or not, they were robbed of more rounds of an excellent fight that was taking place. Let us do that again. We’re, without a doubt, the two best in the division right now, and the fight needs to happen again.”

The rematch is Benavidez’s fifth in his career, and he split the previous four, with victories coming over Dustin Ortiz and Jussier Formiga and the losses coming to Demetrious Johnson and Dominick Cruz.

Benavidez said the physical approach to the bout is naturally different because of the information gathered in the first altercation. The bigger difference, however, comes mentally. The 35-year-old said he doesn’t necessarily love the spotlight, and due to the coronavirus pandemic limiting the amount of obligations required, Benavidez is relishing in a bit of a throwback feeling to the bout.

“It does feel a little more pure,” he said. “Just two guys training in different countries, training as hard as they can for each other, and they’re going to go meet. Thankfully, our sport has become entertaining and must-watch TV in every aspect, but yeah it takes you back to, how did fighters used to fight when there wasn’t Twitter or Instagram or stuff being asked and Embedded, and Destined and all that? They used to just know they were fighting a guy. They didn’t tweet them. They couldn’t Instagram them. They couldn’t Instagram their training sessions or anything of the sort. They were just training as hard as they could in the gym, and you don’t even see the guy until you get there.”

In the meantime, Benavidez has spent his time as usual: training, spending time with his wife Megan Olivi and their dog, Benny, and watching movies.

Few things fit together better than a movie buff and stay-at-home orders. Benavidez said he’s normally the type of guy to scoff at people standing in long lines waiting to watch the flashy releases, more prone to watching character dramas and Oscar-contenders. He is a fighter, though, and cites Raging Bull and Rocky as current favorites in that genre.

Growing up, he believed his aunt when she told him action star Jean Claude Van Damme was his uncle, and so Kickboxer and Bloodsport became childhood favorites. Benavidez even went as far as to telling his elementary school friends that mistaken fact, claiming Van Damme trained him in karate and jokes it might’ve started his journey in mixed martial arts.

“My friends from elementary school still make fun of me,” he said. “If I’m with my friends and Van Damme is on a Doritos commercial or something, they’re like, ‘Oh, it’s Joe’s uncle.’ Even when I first started fighting in New Mexico, my friends would be like, ‘When is the next Kumite, bro?’ I’d be like, ‘Dude, it’s a real fight.’” 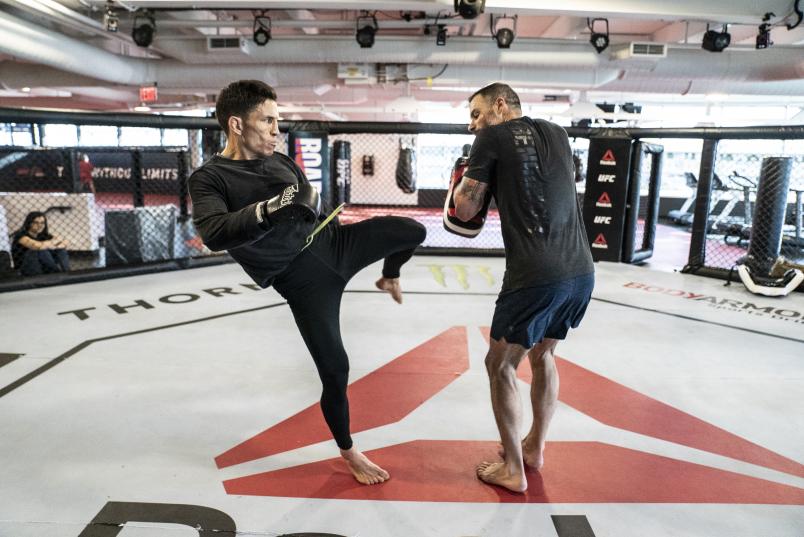 There’s certainly a joke to be made about Benavidez’s next bout coming on an isolated island in which its location was mostly kept under wraps, but his friends have probably made it at this point Most recently, though, Benavidez has gone through the quintet of films in the Jurassic Park franchise, saying he was “trying to have more fun” and found it in the series of movies.

“I realized there is a real art to blockbuster movies as well,” he said. “Sometimes, when you make something that you love, you just have to make it, and if people don’t understand it or don’t like it, it’s whatever, but I’m very into just character stuff, no action, no anything. But, for one, making the action and just the technology of that is a job in itself, but even just the writing is ridiculous because it is. Keeping every age at the edge of their seat at all times takes patience and diligence.”

From the disappointment of failed title shots to the uncertainty from both the existence of the UFC’s flyweight division and ACL surgery, patience and diligence is something Benavidez has shown plenty of throughout his 14-year professional career.

On July 18, we’ll all wait on the edge of our seats and see if this is the moment when he might finally have his blockbuster performance.