Joseph Benavidez - Making The Most Of It

"I’m not nervous at all. I’m ready. I’ve been here before. It’s a great opportunity that I’m not going to waste.” - Joseph Benavidez 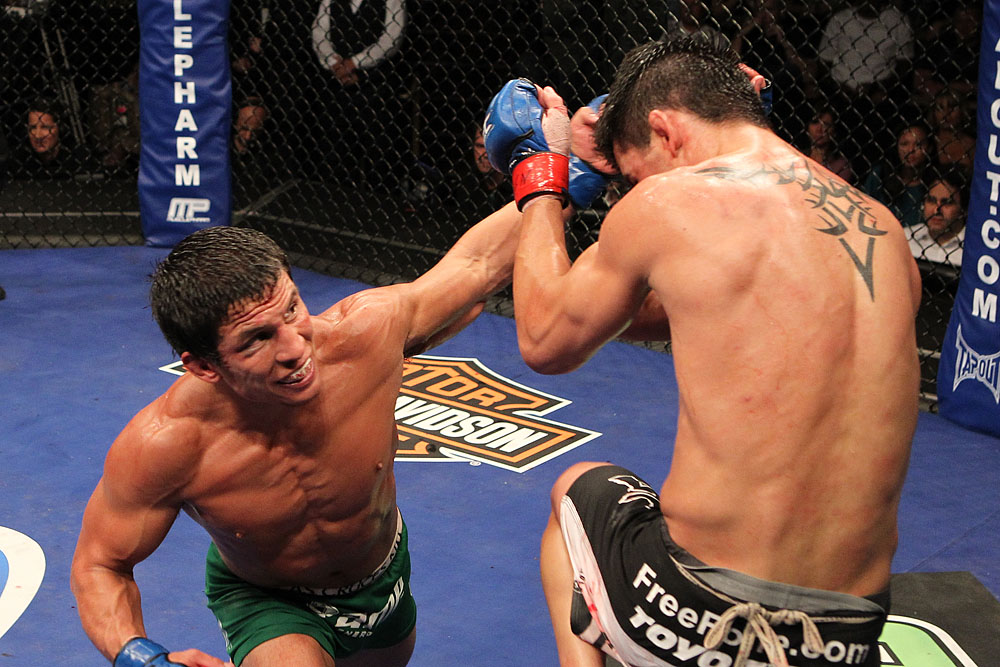 For bantamweight Joseph Benavidez (13-2), making his UFC debut at UFC 128 in Newark, New Jersey’s Prudential Center against Ian Loveland is no time for opening night jitters.

“It’s definitely a bigger stage than the WEC with the fan base and the exposure, but I’ve had big fights before,” Benavidez told UFC.com.  “I’ve fought in front of huge crowds in Japan, but the WEC was the biggest possible stage for my division before we merged with UFC, so while I’m motivated to make the best of my UFC debut, I’m not nervous at all. I’m ready. I’ve been here before. It’s a great opportunity that I’m not going to waste.”

In fact, a little more than four years ago Benavidez moved from Las Cruces, New Mexico with barely more than the clothes on his back, to Sacramento, California, where he hooked up with Urijah Faber’s Team Alpha Male and began his journey to the Octagon.

Faber took him in, and Benavidez earned his spot on the team by cleaning the gym and mopping the mats while training with the likes of Faber and Chad Mendes. Benavidez’s style of aggressive standup and solid submission game is often compared to his mentor Faber’s, but that’s by design.

On his way up the MMA ladder, JoJo (as his close friends call him), fought in Japan’s Dream and other smaller promotions before joining World Extreme Cagefighting, the world’s premier organization for lighter weight divisions that was folded into the UFC late last year.

Benavidez was undefeated in his career, beating notables like Jeff Curran before suffering his first loss in a title elimination bout, a split decision against current UFC bantamweight champion Dominick Cruz in 2009. He bounced back with a victory over former WEC champion Miguel Angel Torres by submission, but lost again to Cruz via split decision in their title bout rematch.

In November of last year, he stunned fans by submitting third degree black belt Wagnney Fabiano with a guillotine choke.

Benavidez says he’s looking forward to showcasing his skills to a larger audience, and is ready to prove that he too, belongs in the big leagues.

“Since the WEC fighters got into the UFC the lightweight division was going to be the big question mark,” he said. “But since we’ve been in, the WEC lightweights have done really well in the UFC, so the notion that the WEC guys are not ready for the UFC is wrong. We are all elite fighters.”

When Benavidez steps into the Octagon on March 19, it will be a dream come true for the one-time 103 pound New Mexico high school state wrestling champion.

“It entered my thought process long before I was sweeping floors in Urijah’s gym,” he said. “I’ve wanted to be a UFC fighter since I was a kid. And when it became even more popular I knew that it was something I had to do.  When I started training to fight I learned I could be really good at this, and when I moved to California it was always my goal to make this happen. My goal was to be the best but I didn’t think I would get to this level so fast, and I never imagined how great it feels and how good it feels being here. It’s such an honor to fight for the WEC and the UFC is that much better.”

In Team Quest’s Loveland, Benavidez knows he’s facing an elite fighter in his own right with a significant size advantage. While Benavidez is just 5’4” tall, Loveland is 5’8” tall, and will have a reach advantage against the smaller WEC standout. Loveland, for his part, made his UFC debut at The Ultimate Fighter 12 Finale, when he stepped in for an injured Leonard Garcia on just two weeks notice, winning a unanimous decision with impressive wrestling and ground and pound against a game Tyler Toner.

“He’s a tough guy,” he said. “He wouldn’t be in the UFC if he wasn’t. He’s on a great streak right now and I like his style. He’s an aggressive fighter and most of his fights have been finishes. He’s fearless and he’s taking a huge step up in competition and to do that shows a lot of character and confidence so that’s a huge thing going in.”

Loveland has finished 12 of his previous opponents by knockout or submission, and has heavy hands and very good wrestling, but Benavidez says he matches up well.

“I have a speed advantage on the feet,” he said. “As far as his wrestling goes he’s going to have to get me down to use it and it’s very hard to get me down and even harder to hold me down. I might even look for a takedown myself.”

And while Benavidez commends Loveland for his character and for taking tougher fights in his MMA career than he has previously, he has this message for the Oregon MMA standout.

“I’m going to show him why I’m considered a step up in competition and I’m going to finish him.”