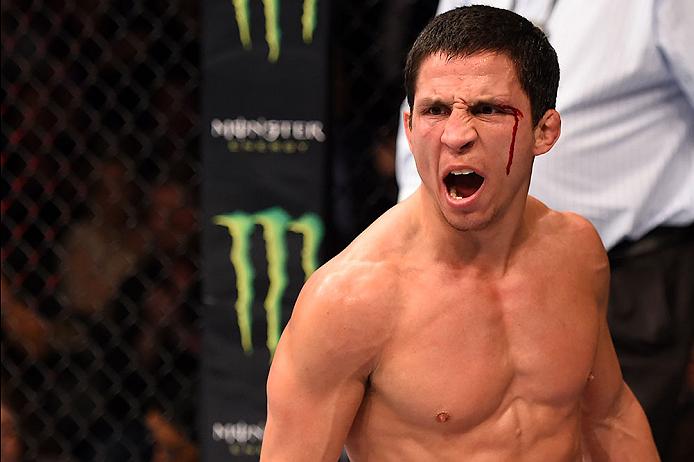 Many of the photos on Joseph Benavidez’ Instagram account aren’t what you would typically see on a pro athlete’s page.

Usually, there’s not even a comment by the flyweight contender.

“I let the pictures speak for themselves and they can be interpreted in many ways,” he said. “If you go back through my timeline, there are hardly any training pictures, but there are random picture of Marlon Brando with the dog, Rocky pictures, I have a picture of a Van Morrison album cover, but not with the title. Sometimes pictures can speak more than words to me.”

Again, not typical, but Benavidez isn’t your typical athlete. That didn’t happen overnight. At one point, the Las Cruces product was like every other young man who decided that fighting for a living was the path he wanted to choose. And then acted accordingly.

“There was a time when all I thought about was fighting,” he said. “All I did in my whole life was go to the gym, train, stop, not think about anything, not have a social life, not have any interests. And that’s great, because I feel you have to be obsessed with something to succeed in it.”

Benavidez’ obsession paid off. At 32, he holds a 24-4 record, with 11 of those wins coming at the highest level of the sport in the UFC. His only losses have come against two fighters destined for the Hall of Fame in Demetrious Johnson and Dominick Cruz, and as he enters his Friday co-main event against Henry Cejudo, he is as hungry as ever to leave the sport with a legacy as one of the greats.

But what he did 21 can’t possibly work at 32, so as the years went by, he began living a life that had little to do with what happened on fight night.

“Fighting is such a hard, intense, dark thing, and there’s no way around the pain, the suffering and the commitment and the energy it’s gonna take,” Benavidez said. “There’s no way around it. It has to happen. So as light as I can make the other aspects of life, and fun and interesting for me, you definitely need that. You can’t just live in those trenches 24/7. And you need that to continue to love it. You need it to keep your sanity and to miss it. That balance in life is ultra-important.”

To find his balance, there’s the marriage to his wife Megan, their dog Benny, his writing and drawing, and a love of film and music that borders on…yeah…obsession.

“My wife always makes fun of me, because she’s just like, ‘Why can’t you just watch something once or listen to it once? Why does it have to take over your life for a few months and then you move on to the next thing?’ And it is like that. (Laughs) For a while, I was obsessed with just drawing stuff, and then the next I’ll be writing, and the next I’ll watch a movie twenty times. I get obsessed with stuff, and if I get something and I like it, I want to get the most out of it that I can. If I enjoyed that moment, I’d like to enjoy many more of it.”

It all circles back to the folks on his Instagram page. Brando, Pacino, De Niro, Scorcese and Stallone didn’t reach the heights in their art without being obsessed. Benavidez has that trait in his DNA, and while he has varied interests, the main focus is still the one that puts food on the table. And whatever he achieves in the years after fighting, he would never describe MMA as a mere footnote in his life story.

“I would never call fighting a blip, because I feel that’s always gonna be somewhat a part of my identity,” Benavidez said. “It’s been what I’ve dedicated my life to, and I love it. It’s everything to me and I feel I’m going to leave a legacy in that realm.”

The next step to that legacy is beating Cejudo, who he coached against on season 24 of The Ultimate Fighter. The two won’t be sending each other Christmas cards, which only adds to the intrigue of a matchup that doesn’t need any extra hype. Yet the real added layer to the fight is that Benavidez, winner of five straight since his second loss to champion Johnson in December of 2013, is the No. 1-ranked contender at 125 pounds and the fighter many believe should be fighting “Mighty Mouse.”

He isn’t. Not now at least. Instead, the man fighting Johnson for the flyweight title will be one of the 16 fighters Benavidez and Cejudo coached on TUF 24. It could have been an awkward situation, but Benavidez didn’t approach it that way. And he still doesn’t look at it with a sideways glance. It’s just not his style, one as unique as you will find in this sport.

“At the end of the day, this show was happening and there was no control over the fact that someone else was going to get a title shot,” he said. “I’m accepting of that because I know I’m only going to get better in the meantime, and for me, the realest way to look at it is, hey, if somebody else can beat Demetrious, that means they’re the best in the world and they deserve it. I’m still gonna get that fight, it’s just prolonged, and in the mean time, it’s a great investment and exposure for the division. But I’m fighting Cejudo, I’m controlling that and that will help me if I do get to the other point.”