Joseph Benavidez Has Never Been Anything But Himself

Through Ups And Downs, Joseph Benavidez Has Stayed True To His Himself. That's Why No Matter What Happens At UFC 259, Benavidez Will Come Out A Winner.
By Thomas Gerbasi, on Twitter: @TGerbasi • Mar. 5, 2021

We’ve been spoiled by Joseph Benavidez.

For as long as he’s been in the UFC, the flyweight from Las Cruces, New Mexico has not just navigated life in the spotlight gracefully when he wins (which is more often than not), but in his darkest hours, as well, taking in endless questions and responding thoughtfully and honestly each step of the way.

That’s not easy, especially in those darkest hours.

So how do you approach the man before his UFC 259 bout against unbeaten Askar Askarov, knowing that he’s coming off a pair of devastating defeats in championship bouts against current 125-pound champion Deiveson Figueiredo?

Well, Joe, a lot of people would say 2020 was the worst year ever. Would you agree?

Benavidez laughs, knowing that this was the easiest way to get to the toughest question. Having been on the sidelines since his rematch with Figueiredo last July, he’s had time to think about it, and he responds accordingly.

“It's all about perspective, and look, I had two chances to make 2020 the absolute crowning year of my life thus far,” Benavidez said. “That's why nothing's ever that bad. I'm lucky I had the choice. In 2020, you look at it and you see that people didn't have a choice. Their businesses are closing, they're diagnosed with this, they can't fight this, there's so much madness and heartbreak going on everywhere that people don't have a choice. And the fact that I have a choice to chase greatness, I know what’s on the other side can be great, and I know the sacrifice also and I know what could happen, but I'm glad I have that choice. So I can't complain about 2020 because I had the choice and the chance to be the greatest in the world two times. And that's not a choice many people got. It didn't go my way, but who do I have to blame for that? I can't even be too hard on myself and blame myself. I did everything that I could in training. It was a tough year, one of the toughest years of my career, but I had the opportunities I feel a lot of people didn't and that keeps everything in perspective.”

"After my last fight I made the acceptance that, that was probably my last title fight ever."@JoeJitsu tells https://t.co/fdV4RnsUPw what the driving force behind his upcoming #UFC259 match-up with Askar Askarov 🔊⬆️

Not many people have that kind of perspective, especially when they make their living in the public eye. Already, the lights shine brighter on wins and losses, and to take those setbacks and look at them in the bigger picture is admirable. I wonder if Benavidez would have felt the same way after losing a pair of title fights to Demetrious Johnson in 2012 and 2013.

“Experience can only happen by experience,” he laughs. “That's the funny thing about this sport, in general, is that the only way to know this is to suffer this or go through this.”

He went through it, for sure, engaging in an instant classic with Johnson in the UFC’s first flyweight title fight at UFC 152 in Toronto. After five rounds, Johnson left with a split decision win and the belt, but a crushed Benavidez vowed to return and get his redemption. It didn’t happen, Johnson scoring a first-round knockout in their rematch a little over a year later.

In the ensuing years, Benavidez was the best flyweight in the world without a belt around his waist, and it took him going 9-1 in his next ten fights to get a shot at the vacant 125-pound crown against Figueiredo. The first fight last February saw the Brazilian emerge with the win but not the title after he missed weight, but in the rematch, Figueiredo left no doubt. Not surprisingly, Benavidez took the defeats hard like any competitive athlete would, but as he looks back at it now, it wasn’t nearly as bad as when he lost to Johnson the first time.

“The first one with ‘Mighty Mouse,’ I still think it was a little more devastating than this last loss that I went through,” said Benavidez. “Even though that fight was a split decision, and it was a close fight, and this one I had no choice and it was my absolute last shot at it, the other one still hurt more. And I never really thought about it like this, but maybe it was because I just wasn't as well adjusted having not gone through as much. I put everything into that and there was nothing else I really had in life. Me beating the best is going to be me. That's why people loved me. For this one, it's like, s**t, I lost professionally at my job, but personally, did it affect me? Did it make my wife not think I'm the best? No. But back then, I didn't have that stuff to fall back on, or it wasn't as important to me, either. What was important to me was, I'm the best, it's the goal, it's the fans, it's to have everyone think I'm the best. That's where I felt my self-worth would come from. So even though that was a close fight and people thought I won, and it was a long time ago, for some reason, that was a more devastating time because that was all I had.” 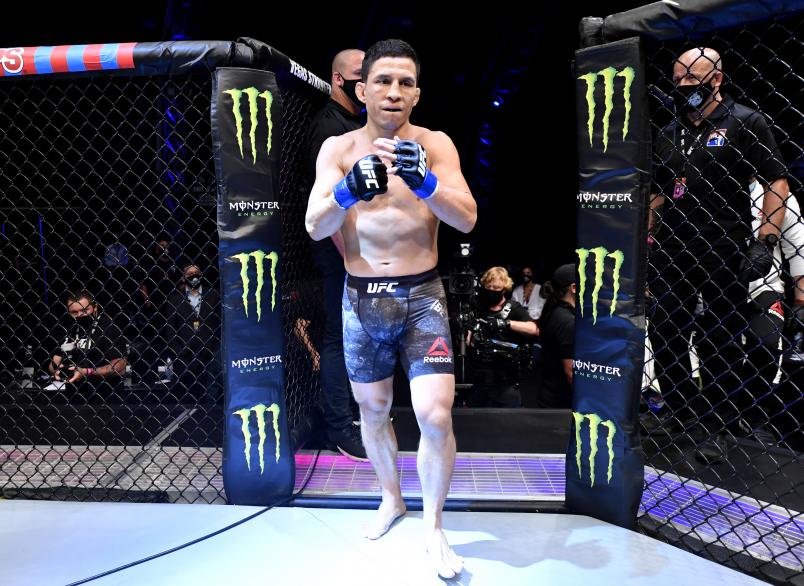 Today, life is a lot different for Benavidez. He’s happily married to a young lady in UFC reporter Megan Olivi who is there for him through every step of this journey, he has the respect of his peers in the fight game, and when he chooses to walk away from the sport, he can do whatever he wants and still be successful at it. And none of this is written to build him up or help sooth a bruised ego. It’s true, and he knows life is pretty good these days.

“There’s something about it (fighting) where I wouldn't want to do anything else, and a lot of it, to me, it's very simple, but it comes to just the lifestyle and what this sport has allowed me to live,” he said. “I watch 30 movies a month sometimes and I talk to my friends and they're like, 'Dude, I can't do that. I don't know what movie you're talking about because I have a kid and I also go to work.' (Laughs) Oh, I'm sorry. I've been 14 years old for the last 15 years. (Laughs) That's great and I know all the riches that this sport has given me in life, the friends, the experiences. I never thought I'd travel to fight in Japan or Australia or Brazil or Singapore. I think it's easier to overlook all the bad things because I made the choice to.”

But there’s more. Joseph Benavidez still loves to fight. That’s a good thing and it’s why he’ll be facing a rising star in Askarov this weekend. But where is Benavidez at in his career now? He’s still ranked second in the top 15, but the odds of getting another crack at Figueiredo aren’t good right now. So, at 36, can he wait around six-plus years for another title shot? Not likely. Then again, if Brandon Moreno beats Figueiredo in their rematch and Benavidez beats Askarov and another contender or two, a title fight wouldn’t be out of the question.

It’s a lot to decipher, but I try to whittle it down to the bare essentials. I tell Benavidez of a conversation I had with former middleweight champion Rich Franklin. He had just lost a pair of fights to Anderson Silva and wasn’t going to get a third crack at “The Spider.” What to do? Franklin said he was at peace with that and just wanted to fight people that got him excited in big fights, like Chuck Liddell, Wanderlei Silva, Forrest Griffin and Dan Henderson.

Is that where Benavidez is at, or is he still focused on getting another crack at becoming a world champion? 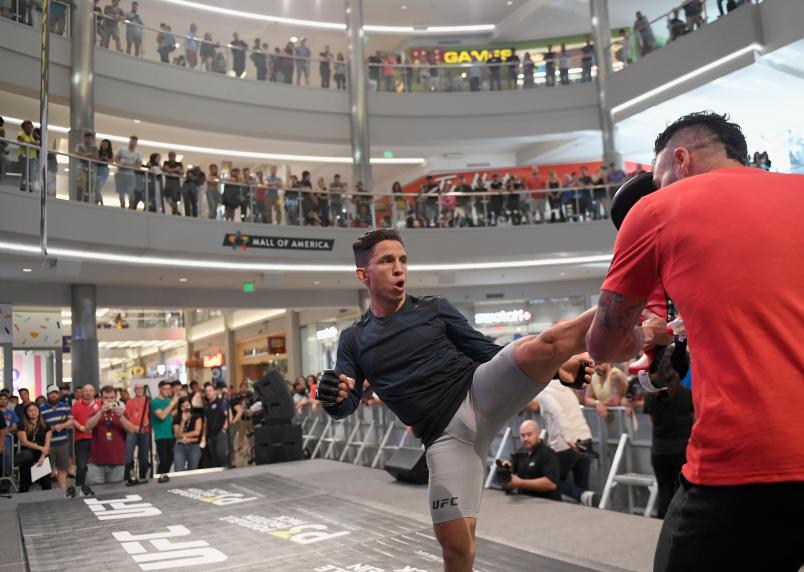 “If I had to be completely honest with myself, I'm kind of in that Rich Franklin mode,” he said. “After you lose, the first thing you want to do is erase it out of your memory and you want to go fight again. ‘That's not me, I'm better than that, I want this, I want that.’ I had fight offers quickly after that second fight (with Figueiredo), but nothing was really getting me up. Look, we don't have Chuck Liddell or Wanderlei Silva, but Askar Askarov, I've been fighting to be the best and I don't want to fight anything less. And it took me a while, not only to get an opponent I liked, but also just to start enjoying the process of fighting to fight. I just need to enjoy this. I need to enjoy the people around me and I need to just love this again. Before the end of the year, I wasn't really feeling that. I want fights that still prove I'm the best.”

Handing the No. 3-ranked contender his first professional loss would be a solid step in that direction but, at the same time, Benavidez has realized that a title around his waist or a number next to his name doesn’t define him. He just loves to fight. And he’s going to keep doing it as long as that feeling remains.

“I think in anything, you can never attain that perfection and fight how you want to fight but you always keep chasing that ghost,” he said. “It's that ghost you're chasing and that evolution of self and that challenge that, oh, I can always do that better. It's gonna break your heart and you know the sacrifices, but I feel lucky that I get to have this choice. And I love it. I love everything it's allowed me to live and experience, and I'm grateful for that part of it. And knowing the chances and possibilities of greatness are there make it a no-brainer for me.”