Joseph Benavidez: In The Franklin Zone

"The one main goal was taken away from me for the time being, and it may
never get to be mine again, but I’m just lucky that I love what I do
and every day I get to wake up and do what I love." - Joseph Benavidez 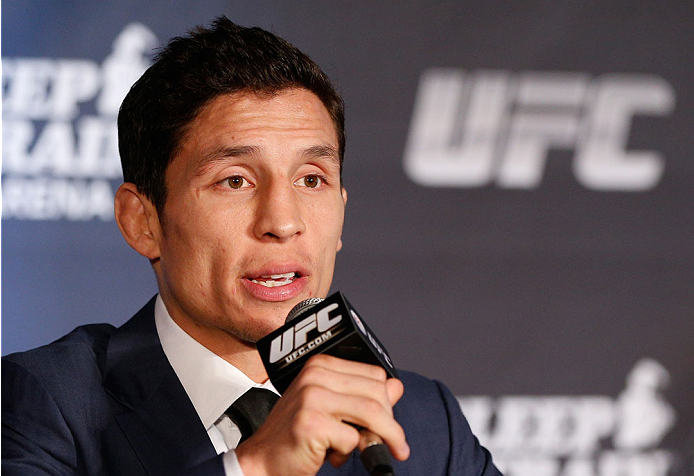 Despite his best efforts, Joseph Benavidez is back in a familiar place, a state of contender purgatory affectionately known as “The Rich Franklin Zone.”

Named after the former UFC middleweight champion, “The Rich Franklin Zone” is reserved for top fighters that have faced and lost to the reigning champion in their respective division on multiple occasions, as “Ace” did to Anderson Silva at the start of the Brazilian’s dominant championship reign.

When you’ve already got a pair of losses to the person lording over the division, it’s hard to make a compelling case for a third kick at the can. Franklin never got another shot at Silva, and after suffering a pair of decision losses to Dominick Cruz under the WEC banner, Benavidez never got the opportunity to face “The Dominator” for a third time prior to departing for the flyweight division.

Following his split decision loss to Demetrious Johnson at UFC 152 when the two battled in the inaugural championship fight in the 125-pound ranks, Benavidez’ experiences with Cruz informed how he would proceed.

He spoke openly about not being in a rush to face Johnson for a second time, cognizant of where a second setback against “Mighty Mouse” could leave him. Instead, Benavidez happily accepted and won fights with Ian McCall, Darren Uyenoyama and Jussier Formiga, showing continued development in each successive appearance.

The run of success made a rematch with Johnson inevitable - the champion had tacked title defenses against John Dodson and John Moraga to his resume, and the Team Alpha Male standout was the only logical challenger left standing.

Originally booked to headline the Ultimate Fighter Season 18 Finale in Las Vegas, injuries forced the lineup to be shuffled, with Benavidez and Johnson ending atop the December UFC on FOX event in the challenger’s adopted hometown of Sacramento.

Having waited out the second meeting as long as he could, it looked as if the stars were aligning for Benavidez - fighting in his backyard off a pair of dominant performances, this felt like his opportunity to capture championship gold.

Just over two minutes into the bout, Johnson handed Benavidez an express ticket to “The Rich Franklin Zone.”

“It sucks,” says Benavidez with a laugh, elongating every consonant in the second word so that there are no misconceptions about his feelings on the fight. But rather than taking a “woe is me” stance, the always upbeat competitor is looking at the positives.

“It was tough, man,” he say, four months removed from the setback and readying to return to action against Tim Elliott on the preliminary portion of Saturday’s UFC 172 fight card.  “Emotions-wise, it was weird - I was more confused than anything. Before the fight, everyone was saying, `If you lose this one, what’s going to happen?’

“I could never experience the emotions that I felt losing the first one because I had never in my life built something up as much as I had the first one. Even though this one was more important, mentally, the way I built that one up, nothing could have been worse. That one I counted on - it was mine - so I couldn’t have built anything up more.

“So even though this was a bigger fight, I didn’t build it up as much, therefore when I failed – miserably - it was tough, but it was more confusing than anything. I got knocked out and honestly, I was sad and it sucked and (was) embarrassing, but in a fight like that, there’s not much to learn, so I was just pissed off, I guess.

“It’s more embarrassing, especially in front of your hometown and the way it happened,” he adds. “But those are all things that try to test me. You got knocked out - are you going to let it break your confidence, break your faith? It let’s me know that no, stuff like that is not going to stop me.

While finding the motivation to keep pressing forward when history shows another title shot might not ever come could be hard, but Benavidez doesn’t have to look very hard to find someone to draw inspiration from as he starts back down the long road to the top.

Over the last few years, Team Alpha Male leader Urijah Faber has managed to work his way back into title fights on several occasions. Though each unsuccessful attempt to capture championship gold is declared his last by fans and media alike, “The California Kid” jumps back in the Octagon, wins his fights, and lands back in the blue corner, ready to try again.

“How many times has he been in this position and gotten the title shot?” Benavidez says of his friend and teammate. “He’s shown the old thing of beating everyone in front of you until you’re the only one left standing for a title shot. I have him to model myself after.

“He’s been there and I’ve seen him do it - never stop, never lose confidence, and just keep getting title shots because nobody can beat him. I just have to do the same thing. I’ve seen it done, so I know it’s possible. The goal is beat everyone until they’re like, `What else can we do with this guy?’”

Benavidez has been looking at his career from a different perspective since the first loss to Johnson.

He over-invested in that contest, turning it into a life or death situation, causing him to tense up during the fight and miss his opportunity to soak in the experience of being in the first flyweight title fight in history.

But life didn’t end after that initial defeat - his friends and family still loved him, he still had a job, and the sun did, in fact, rise the next morning and every morning since, prompting the Las Cruces, New Mexico native to adopt a new outlook that helps buoy him in the wake his second loss to Johnson.

“How many guys out there are dedicating their lives to this sport and never make it to the UFC?” questions Benavidez, setting up the breakdown of how he looks at his career. “There are a lot of guys out there that fight that won’t ever get to the UFC.

“I’ve come a long way and gone a lot further than a lot of people probably thought I ever could have. I’ve exceeded a lot of people’s expectations - not my own, because I know I can be the best in the world and a lot of people that support me think I can - but I get to do this and live my dream. Not that that is completely satisfying, but it’s something you’ve got to look at when the other thing gets shut down.

“Obviously being the best and being champion is the goal, but at the end of the day, I have to look at it like I love to fight and love what I’m doing,” he continues. “(Being champion) is the purpose, but it’s not the only purpose. I want to go out and test myself every day. I love doing what I’m doing - entertaining fans, putting on great fights, leaving a legacy - and I still get to do those things.”

His next opportunity to do what he loves comes Saturday night on the preliminary card in Baltimore against Elliott, who enters off a loss to current No. 1 contender Ali Bagautinov.

While going from the main event to off the main card might cause some to bristle, Benavidez pays it no mind, focusing instead on getting back to work and getting a victory over the 27-year-old southpaw.

“I think I’m better than him everywhere besides maybe straight awkwardness, if that counts for anything,” jokes Benavidez, who carries a 19-4 record into the Octagon.

“He’s pretty long for the weight class, likes to switch stances, stays right in your face, and I love that - I love guys coming after me. Besides the last fight, it seems that the guys that usually beat me are the ones that stay away and (point-fight), where Elliott will come at you. I’ve had great success with everyone that has tried to do that to me.

“I love the fight,” he adds. “The first time I saw him fight I thought he had the potential to be a great fighter. He’s exciting and he’s never put on a boring fight. I like to think that I haven’t either. We both like to push the pace, so I’ve got to go in there, push a higher pace than him and hit harder than him.”

* * *
Every fighter envisions himself or herself fighting for championship gold, winning the title and enjoying an Anderson Silva-like reign atop their respective division. No one sees consecutive defeats to the same opponent and a ticket to “The Rich Franklin Zone,” but sometimes that’s how things play out.

Rather than lamenting his misfortune and growing frustrated with his fate, Benavidez is still looking ahead to the future, focused on continuing to develop as a fighter and maintaining his “It’s not really that bad” approach to his career.

“I feel like I was the best I’d ever been that night,” he says of the second fight with Johnson. “Although it was my worst showing, I felt the best going into that fight - mentally, physically. I’ve come pretty far and I can still go further. I’m still learning and growing as a fighter. I don’t think I’m at the end by any means, and I’ve already done pretty well.

“The one main goal was taken away from me for the time being, and it may never get to be mine again, but I’m just lucky that I love what I do and every day I get to wake up and do what I love.

“I just look at it like that now, and you never know what’s going to happen. It’s a crazy sport - the whole landscape of the division could change from day-to-day. I just have to take it one fight at a time now.”