Joseph Benavidez: A Diet Fit for 'The Beefcake'

Read on for the latest installment in UFC.com's weekly series of articles on proper nutrition from the biggest names in mixed martial arts...this week, Joseph Benavidez 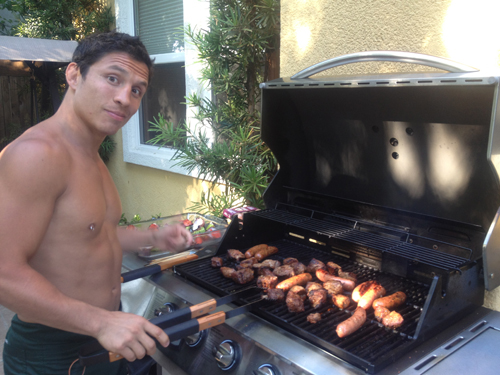 But in Benavidez’s case, nothing could be further from the truth. Unless, of course, you consider feasting on slurpees, IN & OUT burgers, beef tacos (with fried shells), Cap’n Crunch Berries cereal and chicken fried steak to be bird food. Because those indulgences and more are part of the flyweight standout’s diet as he readies for a Sept. 22nd clash with Demetrious Johnson in Toronto (the winner to cement his name in history as the first-ever UFC Flyweight champion).

Though often referred to as Joejitsu these days, Benavidez’s Team Alpha Male brethren affectionately know him as “The Beefcake,” a reference to the dense muscularity packed on New Mexico native’s 5’4” frame. If you’re a spontaneous, make-it-up-as-you-go-along eater; if you believe that organic food is overrated; and if you have a weakness for red meat, then Joseph Benavidez (16-2) just might be your kind of grubber – an elite fighter whose ultra-liberal eating habits will surely raise plenty of eyebrows.

UFC: The person who taught you the most about diet and nutrition is … Fill in the blank.
Benavidez: I would have to say ‘Myself.’ Or maybe television or The Food Network.

What was your diet like as a child growing up in New Mexico?
Ah, man … growing up in a Mexican family to a single mom, basically we were always eating beans. We would always have a pot of beans cooking on Monday and throughout the week we were always finding ways to eat them – either through tacos, burritos or refrying them or with cheese. It was just always something with beans or cereal.

What kinds of cereal?
Cinnamon Toast Crunch has always been my favorite. Over the years I’ve gained a love for Cap’n Crunch Berries. I also enjoy Raisin Bran, Shredded Wheat and Honey Bunches Of Oats and all that stuff.

What kind of milk with your cereal?
Whole milk. Anything else tastes like water to me.

What size bowl are we talking?
You can’t go with a really big bowl because then it will go soggy. So I go with a regular size bowl AND THEN I EAT LIKE THREE OR FOUR (bowls) OF THEM. Oh yeah …

The last time you ate Cap’n Crunch Berries was …
Um, not too long ago! I mean, if I’m not fighting then I’m eating whatever and cereal is one of my favorite things to eat. I even mix Cap’n Crunch into milk shakes.

When I don’t have a fight coming up I’ll eat cereal, ice cream, IN & OUT burger, slurpees. There are no boundaries really. I definitely surprise people with my eating habits. After I dropped to 125 I was able to out-eat almost everybody on the team.

I sometimes get judged by my teammates when we go to lunches or breakfasts. The other guys on the team will order like an egg white omelet and I’ll get chicken fried steak and eggs or something like that. I definitely eat riskier and a little less healthy than some of them. But the biggest eater on the team is probably (155er) Justin Buchholz.

How heavy can you get at flyweight now?
This is actually pretty interesting. When I fought at 135 I would walk around and the heaviest I got was like 147 (pounds). I really never saw 150. I would walk around about 144. After my fights I would just eat a little bit, nothing special. I wasn’t depriving myself to make weight so once I made weight I didn’t miss food. I would eat IN & OUT burger a week before my fights.

However, when I went to 125 I had to strictly diet for two months straight and really deprive myself. But after my first fight at flyweight I just went on (eating) binges, just unnecessary eating – eating when I wasn’t even hungry. So since I dropped to flyweight I actually get up to 150 pounds, which is something that didn’t happen when I fought at 135.

It’s funny: I’m bigger as a flyweight than I ever was as a bantamweight! My theory is that I deprived myself so much to make the lower weight that I miss certain foods … so I would just eat and eat. It made me want food and binge like I never have before.

You have experimented with many nicknames in your career – even featured in a video alluding to your plethora of monikers (among them “Reno: The Biggest Little Man on the Planet” and Joe-B-Wan Kenobi). Another moniker is “The Beefcake.” Is The Beefcake more applicable now than ever? I had wondered if you could still be a Beefcake as a flyweight, but apparently it is a reality.
Oh yeah, of course. I’m beefier than ever, actually. That’s where the nickname came from. I guess ‘Beefcake’ used to mean studly or whatever … but I’m just a freakin’ ball of meat walkin’ around in tight-fitting clothes so I look even beefier. So everyone just started calling me Beefcake.

Does anyone on the Team Alpha Male squad wear tighter fit clothing than you?
No. I mean, we’re all down with Spandex and that’s about as tight as it gets. It’s not just about being a handsome, little beefcake. But I also am just beefy; I’m stout. I’m like a little meatball rolling around on the mat.

You have the chance to become the first UFC flyweight champ in history. We see a lot of top fighters today hiring nutritionists and becoming extremely conscientious about what they eat, particularly favoring organic seems to be a growing trend. If you become champ you would be bucking that trend.
It could just be the way that I was raised. In New Mexico nobody even knows what organic means, so … when I moved to California (and started training at Urijah Faber’s gym) all that stuff was new to me. Now, I do enjoy eating healthy food when I get into my groove during training camp to make 125. I start eating vegetables and (making) fresh juices and drinking Muscle Milk – but they are not all organic - and I enjoy it. It gives me a certain discipline and I don’t mind that.

But as fighters we make so many sacrifices and food is one of life’s greatest joys. So when the off-season comes around I don’t see a reason to sacrifice that part of my life. It keeps me happy and keeps me smiling knowing I can eat whatever I want.

So your first-ever weight cut to 125 really wasn’t that difficult at all, right?
It really wasn’t. As the fight got closer I was walking around every day at 130 anyway, so … I didn’t get in the sauna at all. It wasn’t really a struggle. I felt more focused and in the best shape ever. It made me realize that (125) is definitely my natural weight class. I felt perfect. I probably weighed 138 the night of the fight, but this time (against Demetrious Johnson in September) I plan on getting heavier.

Do you favor any meal in particular after weighing in?
No, it’s pretty random for me. I’m not a big nutritional guy – people ask me for nutritional advice all the time! – and I don’t know what in the heck to tell them. I just do what works for me. It’s not really a huge thing to me.

But after weigh-ins I try to hydrate really good with water and get a lot of carbs, protein and sodium to put weight on me. So what I eat depends on where we are fighting. Different countries and cities offer different stuff. We go to Brazil, Japan, Canada … and sometimes you can’t find stuff that you’re used to. So you have no choice but to improvise. I usually do go for pasta. But if you ask me why, I can’t tell you. My diet is different, but if you believe in what you’re doing that makes all the difference in the world, you know?

True or false: Joseph Benavidez can throw down in the kitchen.
I wouldn’t go so far as to say I’m a very good cook, but I have my dishes where I can hold my own. Tacos are probably my go-to meal because of my Mexican heritage and that’s what I learned to cook. I go very basic, nothing too fancy: I just buy some ground beef, I put potato shredding in it and season it with garlic, pepper and salt. I don’t just buy (taco) shells or heat up a tortilla. I’ll actually get a corn tortilla and fry it into a crunchy yet chewy shell. Then I top it with cheese, sour cream and guacamole, all that stuff. I’m pretty good on the grill as well. Other than that I leave it to my mom, my girlfriend and restaurants.

Do you eat your beef tacos during training camp?
Yeah, I do that. I don’t mind eating some nice fattening red meat during camp. It makes me feel good and it’s still protein. Sometimes your body breaks down and you need that fat and iron and whatever else is in there – I don’t really know! But I’m definitely a big red meat eater.

Joe, how many years do you expect to live with your spontaneous diet? (intended in jest).
Truthfully, I don’t know. But my name and legacy will live on forever, you know what I mean? I’m going to be the George Washington of flyweight champions. George Washington died long ago but everyone knows who George Washington is. So my legacy as a fighter will live on forever. Physically, who knows? I’m healthy and I live a healthy lifestyle from working out. I don’t drink or do drugs or abuse my body in any way. So I’ll probably live about average, whatever average is.