Joseph Benavidez - Back From Purgatory

"The UFC picked the four best guys that they could have to start this
flyweight tournament. The one who comes out on top is definitely gonna
be the number one flyweight in the world." - Joseph Benavidez 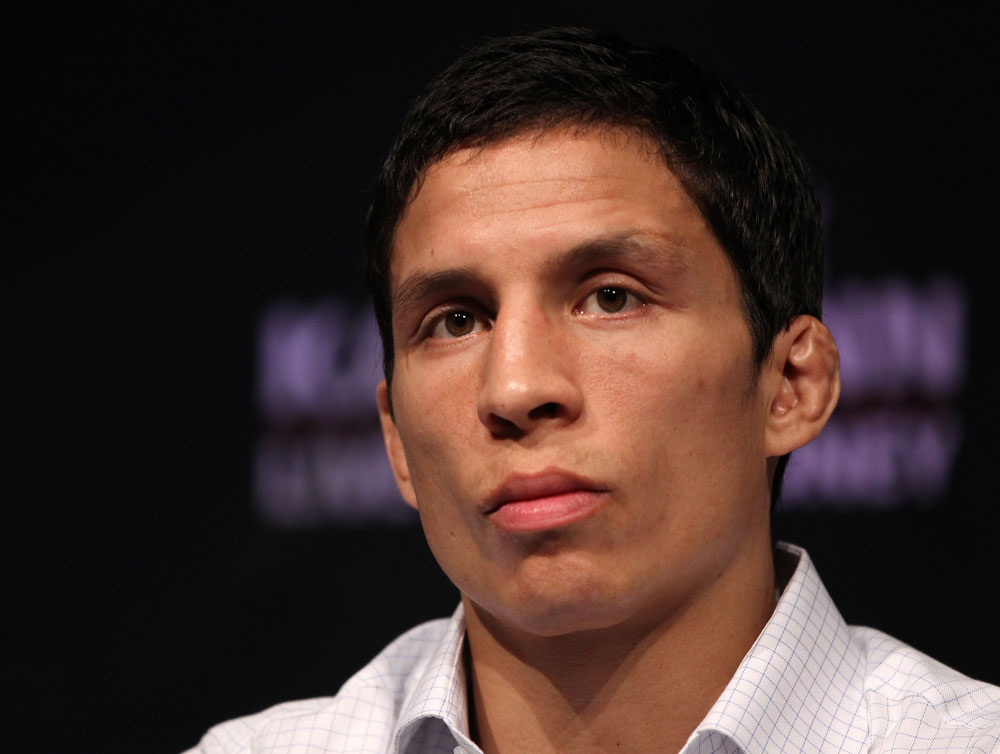 A lot of things have gone on in the last couple months for Joseph Benavidez. He is no longer a bantamweight, he is officially a “Joe-Jitsu” fighter, and this Friday night he will make his flyweight debut against Yasuhiro Urushitani in the UFC’s first-ever 125-pound tournament.

Yet even with all these changes, Benavidez promises that one thing will stay the same. Ted Nugent’s “Stranglehold” will remain his entrance theme.

“That’s my jam,” said Benavidez, whose career has only seen him change up his song once, with a move to James Brown’s “The Payback” for his rematch with Dominick Cruz. Other than that, it’s all ‘The Nuge.’ “Ted Nugent’s the one, that’s the one that gets me going and I think the fans are starting to know me by that song also.”

With that settled, you’ve got to consider that everything else will fall into place for the 27-year old Las Cruces product, one of the top bantamweights in the world for years, but also one in need of a change of weight class scenery.

“I always thought from the very beginning that I could make flyweight, but there wasn’t a division, so I was kinda forced to compete at ’35,” he explains. “I remember when I first got to California five years ago, I weighed 136. Me and (Team Alpha Male squadmate) Urijah (Faber) thought flyweight would be perfect, but it didn’t exist, and really a ’35 pound class barely existed, but I knew I could compete with these bigger guys anyway, so, I walked around at about ‘35 to ’40 and competed in that weight class. After my first loss to Cruz, I was only weighing about 140, and that’s when I realized that I had to be a little bigger to compete with these guys. I went up to 150, tried to bulk up and get a little stronger, and it worked out. I kept my speed and stayed powerful, and I was doing fine in the weight class. I only lost to the champion, I was number two in the world, but I was in kind of a funny situation as far as title shots and getting fights go.”

That funny situation involved both his teammate Faber and his nemesis Cruz. If Faber wins the title from Cruz in their rubber match later this year, Benavidez would be put in a position of fighting his friend, something neither is interested in. If Cruz retains the 135-pound crown, how does the UFC sell a third fight between Benavidez and the only man to have beaten him – twice?

“I was kind of in a weird purgatory in that ’35 pound division,” said Benavidez. “I couldn’t fight Cruz again, me and Faber agreed we wouldn’t fight each other, and those are the next two guys at the top, and I really can’t fight either of them. So I was in a weird position, getting kinda weird fights that didn’t make sense, and they were on the undercard, so I didn’t really even get a chance to really benefit from this merger (with the WEC and UFC). Now I don’t have to answer the questions about fighting Urijah or Cruz now; me and Urijah can just both have belts and that’s been the plan since the beginning.”

He can also regain the momentum he had back in the WEC, where he went 5-2, losing only to Cruz while turning back the likes of Miguel Angel Torres, Jeff Curran, Rani Yahya, and Wagnney Fabiano. When he came to the UFC, the main card staple didn’t see TV time for his wins over Ian Loveland and Eddie Wineland, but on Friday, he’s back in prime time against Japan’s Urushitani, a fighter new to UFC fans and, initially, to Benavidez too.

“Honestly, I had just heard his name,” he said of the 19-4-6 veteran. “You look at the rankings and stuff, and I’ve seen him at the top of the flyweight rankings, but I never took the time to go check out his videos until I got the fight with him, and now that I’ve checked him out, he’s a great fighter, he has some good wins, and it’s definitely a great fight for me. I’m glad that I get to fight someone who’s already established at the weight and it’s not just me and another guy from ’35. This guy is already established at the weight class, so when I beat him, I’ve beaten a flyweight who’s proven himself. He has that international flavor to add to the tournament, and the Japanese are known for their lighter weight fighters and he’s the best one they have over there. So it’s a great fight.”

And one that will put him in a fight for the first UFC flyweight title later this year. From purgatory, Benavidez has shot right to heaven, because if he wins, by the end of this week’s card, he will know who he’s fighting next, practically planning out the rest of his year.

“That’s one of the best things of it all,” he said. “In the ’35 pound division, I had no idea who I was gonna fight. Even up to when the flyweight tournament was announced, that was a pretty long layoff for me, and look at my first fight in the UFC; I was the number two bantamweight in the world, and I’m fighting Ian Loveland on an undercard. Then I fought Eddie Wineland, who was coming off a loss, and these fights were doing nothing for me. After that I had no idea who I was gonna fight. So it’s good that I’m back in a spot where I can have my fights planned out, and it’s great to know that not only do I have this fight, I have that fight. It’s job security, but it’s hard not to look forward to that also, though, because you know who your next opponent could possibly be.”

That possible next opponent is either Demetrious Johnson or Ian McCall, the two fighters competing for a spot in the flyweight final as well. Yet unlike Urushitani, Benavidez has had his eye on these two WEC vets for a long time.

“I’ve always watched them and I’ve actually been a fan of both their fighting styles for a while,” said Benavidez of Johnson and McCall. “Me and Ian fought on the same card before and me and “Mighty Mouse” have also. So I’ve seen those guys a lot, I love their fighting styles, and the UFC picked the four best guys that they could have to start this flyweight tournament. The one who comes out on top is definitely gonna be the number one flyweight in the world.”

Benavidez claims that he’s “faster and in better shape” and even a little meaner at 125 pounds, and if that’s the case, he’s got a great shot at putting the new division in a “Stranglehold” immediately. So with his music, training, and situation in order, all he’s got to worry about is fighting on Australia time, which will be on Saturday morning in order to have the fights air in the US on Friday night. No problem, says the inventor of “Joe-Jitsu.”