"I like challenges, and when I watched MMA I knew that I wanted to be part of it." - Jose "Teco" Quinonez 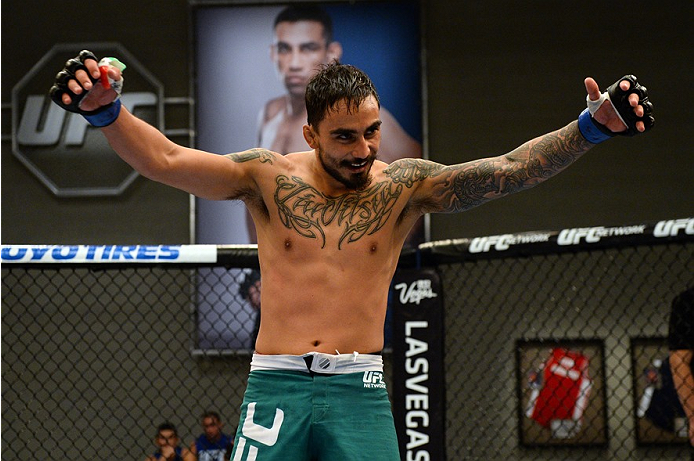 He’s got the Zapata-esque facial hair, a win over his opponent in Saturday’s Ultimate Fighter Latin America bantamweight final - Alejandro Perez - and is seemingly on his way to big things in the UFC, all before his 25th birthday. And though Jose “Teco” Quinonez knows that life will change after Saturday night in Mexico City, he can’t wait.

“I think it will change a lot, it will be powerful to make history and become the first Latino bantamweight Ultimate Fighter,” he said through a translator. “I imagine winning the contract and keep winning my fights within the company while I continue to grow as a fighter and as a person.”

Initially chasing a dream to be a soccer player, Quinonez instead found combat sports more to his liking, and at 16 he entered the gym. He quickly discovered that boxing wasn’t his thing, prompting him to seek out the sport that would eventually hit the sweet spot for him – mixed martial arts.

“Boxing did not fill my expectations,” he said. “So I always looked for something else. I like challenges, and when I watched MMA I knew that I wanted to be part of it.”

In his early pro career Tlaltenango’s Quinonez was unbeaten, scoring a decision victory over his future TUF teammate Alejandro Perez as well, until a November 2013 loss to Davi Ramos. But then The Ultimate Fighter beckoned, giving him the opportunity to erase the memory of that loss and get a shot at the big show.

“It was a really cool experience and it changed my life,” he said. “When we were inside the house and lived with all the fighters, it was the best experience.”

Quinonez’ positive assessment of life in the reality show bubble was no doubt aided by two wins over Bentley Syler and Marco Beltran that put him in Saturday’s finals, and while he and Perez did fight before, they also spent six weeks together as teammates, making the dynamic an interesting one heading into the most important fight of their careers.

“It will be a tough fight because I know him and he knows me,” Quinonez admits. “He will bring his strategy and I have mine, so it will be a clash of strategies and it will reflect who did the best work, and hopefully you can see a war inside the Octagon.”

To prep for that war, Quinonez has been putting in long hours with the Alliance MMA team in San Diego, a move that may be the most important in not just getting him to the UFC, but keeping him there.

“Being with the Alliance team has been a really cool experience because fate brought me here and I met friends like Danny Martinez. Also, Dominick Cruz, Myles Jury and Eric del Fierro have taught me a lot and improved my striking. I've learned a lot with them.”

On Saturday it’s time to show what he’s learned, not just to UFC fans, but to a packed house in the Mexico City Arena. And that doesn’t just go for him, but for the rest of the UFC’s new Mexican contingent.

“Fighting in front of the Mexican public and being part of history in the first UFC in Mexico, I hope we will please all the fans and that they will see that there are Mexicans who have worked so hard in this sport,” he said. “We're willing to keep fighting and keep representing Mexico and show that the “Corn Warriors” are looking to stay and are not just visiting. I can’t explain it with words, so you will have to see it with your own eyes. I will give my life in the Octagon, because I want to become The Ultimate Fighter, and I'm going to give a great fight.”