"I'm fighting in Rio de Janeiro, with the support of my fans, so I'll push the pace and get back on the road to knockouts." - Jose Aldo 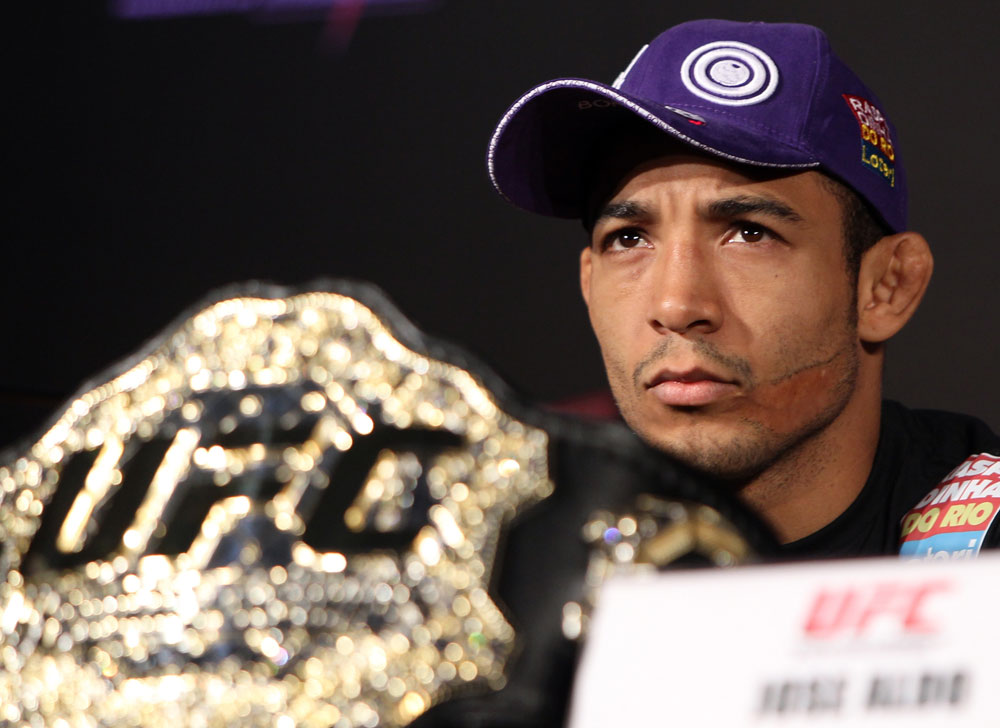 A look back at the time UFC featherweight champion Jose Aldo spent in the WEC will make you realize that after a few of his knockouts in the blue cage, he started dancing to celebrate his victories.

This tradition repeated itself time and time again, and while it was hard to understand what kind of rhythm Aldo was trying to emulate, you also laughed at the stance and moves the 145-pound kingpin performed in those times, and actually looked forward to the idea that if Aldo mauled his opponent, we'd see a dance or witness him leaving the cage to celebrate with the fans in the arena.

That was the trademark of Aldo’s early days in the WEC, but once he moved to UFC and got his belt, we never saw these moves again. First, because he defended the belt twice, both by decision, and second...well, there is no second. So where exactly were those moves, Aldo?

"That was part of the excitement I felt after each victory in the WEC. I wasn't like, 'if I beat the guy I'll dance like this or like that.’ I just played around with it during training, joking with my teammates, and then after the fights I did it."

Aldo mentioned how pumped he was those times, with every obliteration of an opponent crowned by those funny moves, oops, the dances. That said, something happened when the champion was imported to the UFC. We didn't see knockouts, we didn't see dances; perhaps a different Aldo is now fighting for the UFC. The champion disagrees, but he does discuss the difference between the organizations.

"The UFC gets much more attention, and of course those who didn't know me before but went to search my footage, they saw what I did in the WEC," he said. "I feel like them, like some pieces of my game were missing. But what I can say? I'm back, hungry, very well trained, and I'll search for the KO and try to make it happen."

"Plus, more publicity means more studying, more strategy, and guys come to fight avoiding my creativity,” Aldo continues. “It’s not like in the WEC times, when they were unsure of what will this guy will come out with next? So this is not just trying to knock their head off, but there is an elite opponent ready to capitalize on my mistakes and spoil things for me."

That was probably what we saw during his two title defenses against Mark Hominick (UFC 129) and Kenny Florian (UFC 136). It wasn't that Aldo looked completely different from the WEC times, but for those who were used to see his flying knees and combos, it seemed Aldo wasn't training these showcase moves anymore. But he was.

"I never stopped training flying knees, and my standup game is much better than it was in the WEC, but like I mentioned, we have worthy talent standing on the other side of the cage," he says. "WEC had too, but in the UFC, the opponents have more footage and they are taking advantage of this fact. Anyway, I'm fighting in Rio de Janeiro, with the support of my fans, so I'll push the pace and get back on the road to knockouts."

Fighting in Rio de Janeiro is a fuel to Aldo, as he hasn’t fought here since 2007, and when he did, the results were usually fantastic. There was a 20 second KO via soccer kicks over Aritano Barbosa in 2005, and a unanimous decision over ultra-tough Fabio Mello, just to name two. The fight against Barbosa was a memorable one, and not just for the result, but because it showed the stark contrast between fighting in Rio nearly seven years ago compared to fighting here now with the UFC in his adopted home city.

"That fight was (laughs)…we were starting, the crowd was on their feet because no seats were available, and I got pumped about that,” he says. "It was a sold out place with people screaming and giving me their support, and man, I'm seeing this scene again now, but with a bigger crowd, everybody able to sit down, and I'll go for the knockout with the support of my hometown fans."

What was first seen during the UFC’s return to Brazil last August will again be seen for UFC 142, and Aldo believes that the support of his Brazilian fans is going to be an extra weapon against his challenger, the powerhouse wrestler and undefeated Team Alpha Male member, Chad Mendes.

"After you get a belt, your dream is to headline an event like I’m doing now against Mendes," said Aldo. "I feel at home fighting in Rio, and my friends, family and of course my fans will be closer to me and it's all I need to overcome Mendes."

But Aldo doesn't fool himself, as just having the crowd behind him doesn't win fights. If that was a reality, every single time people fought outside their country it would be a guaranteed defeat. So to boost his chances, the Brazilian brought aboard a high level wrestler in former UFC lightweight title challenger Gray Maynard, a worthy addition when you are going to face a great wrestler like Mendes.

"Training with Gray was an eye opener for my takedown defense, and our connection was great," he said. "The importance of acquiring an elite wrestler like Gray will be seen. He has been doing it since he was a kid, and his tips, his advice, and his strategy are some things I'll be using on the night of UFC RIO. I learned a lot, and now it's time to get it on."

So, now it time to dance again?

"He'll lose his undefeated record on January 14th; I see that happening," he says. "And if the KO happens, I'll have a surprise for the fans, indeed (laughs)."