"Any fighter at this level is dangerous and difficult. You have to respect them all and you have to train very well
for them, which is what I’m doing." - Jose Aldo 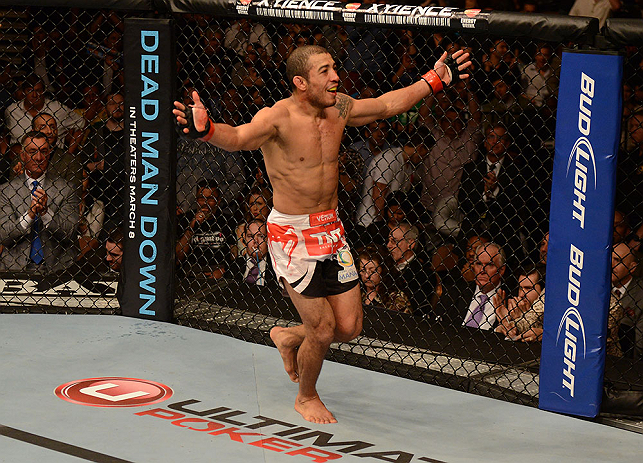 When it was announced that Anthony Pettis had been forced out of his UFC 163 bout with featherweight champ Jose Aldo due to injury and replaced by “The Korean Zombie,” Chan Sung Jung, conventional wisdom said that the same fighter who lost to Leonard Garcia and George Roop and who earned his nickname in part due to his ability to take punishment and keep moving forward was being led to slaughter.

“Any fighter at this level is dangerous and difficult,” said the champion. You have to respect them all and you have to train very well for them, which is what I’m doing.”

That’s the difference between fighters like Aldo and the majority of his peers. Let’s face it, it’s human nature for someone who has been dominant for so long to eventually take the foot off the gas when he assumes that just showing up is enough. It’s called reading your press clippings, and the examples of fighters who have paid for such hubris in combat sports over the years could fill pages and pages of copy.

But Aldo appears to be cut from a different cloth, one where he never forgets where he comes from and fears going back there, even if that’s the furthest of far-fetched notions. Like most fighters, he comes from humble beginnings, even sleeping on the mats of the Nova Uniao gym as a teenager trying to make a new life for himself. But even after making it to the top of the featherweight division in the WEC and now UFC, and earning a spot on the pound-for-pound list, there’s a fire in Aldo that has yet to dim after four successful UFC title defenses. That doesn’t mean he downplays who he is as an athlete, but at the same time he knows what it takes to remain at the top.

“I’m an all-around fighter and I will take the fight wherever it has to be taken, but at the same time, it also means that I have to train very, very hard to stay where I am,” said Aldo, who admits to not watching his opposition as closely as he watches himself.

“I’m much more worried about my own fights and my own mistakes than paying attention to the mistakes other opponents might be making.”

Yet as Saturday’s bout with Jung approaches, Aldo has been paying close attention to the task at hand and what may appear to be the challenger’s downfall: his tendency to open up and throw wide once the fists start flying. For a precision striker like Aldo, that’s music to his ears.

“He’s a very aggressive guy,” said Aldo of the Zombie. “In his standup fights he presents opportunities and we’ve definitely been studying that. I think that he fights very open and leaves a lot of opportunities to be struck. But if that’s the way he wants to fight, let it be that way.”

If he does, it could be a short night, something past opponents Chad Mendes and Cub Swanson found out the hard way, as he seized openings and dispatched the talented challengers in 4:59 and :08, respectively.

But if you can keep your chin tucked and your hands up and get through the first couple rounds with Aldo, he has been known to slow down in the championship stanzas, as evidenced by his ultimately successful defenses against Mark Hominick and Frankie Edgar. It’s a criticism the 26-year-old Manaus native has heard before.

“I have to be ready to take the fight whatever way it goes,” he said. “If it’s a long fight or a short fight, I’ve got to be trained and ready for anything that comes up.”

Even Jung’s rapidly improving ground game, which has accounted for two Submission of the Night victories over Leonard Garcia and Dustin Poirier? Aldo, a BJJ black belt, scoffs at suggestions that Jung will give him trouble if the fight hits the mat.

“He’s aggressive and he’s got a good ground game, but it’s not something I’m very worried about,” said Aldo, a pupil of respected coach Andre Pederneiras. “I have been training jiu-jitsu all of my life, so there’s nothing in the ground game that scares me in any way.”

Put it all together now. Aldo is aware of his opponents, taking them all very seriously. But at the same time, he brings the edge of the true competitor where he believes whatever his foes can do, he can do better. That’s a dangerous mix of humility and confidence, respect and disdain. It’s what makes Aldo the best featherweight on the planet, and one who may keep that title as long as he wants to. Just ask him about Saturday’s fight with the Korean Zombie.