"The King Of Rio" Eyes More History, And A Domination At Bantamweight
By Steve Latrell, on Twitter: @TheUFSteve • Jul. 9, 2020

“A superhero that I constantly have in mind--and I wear his clothes every day--is Iron Man.”

Jose Aldo is describing his admiration for the Marvel Comics character, and it’s nearly impossible to not see a connection.

“It’s on my phone case, on my t-shirts that I wear at home…I train with his t-shirts.”

But whereas the fictional Stan Lee hero constructs a suit of armor that makes him much larger, it takes a fighter the caliber of Aldo to make his armor smaller but equally impenetrable. 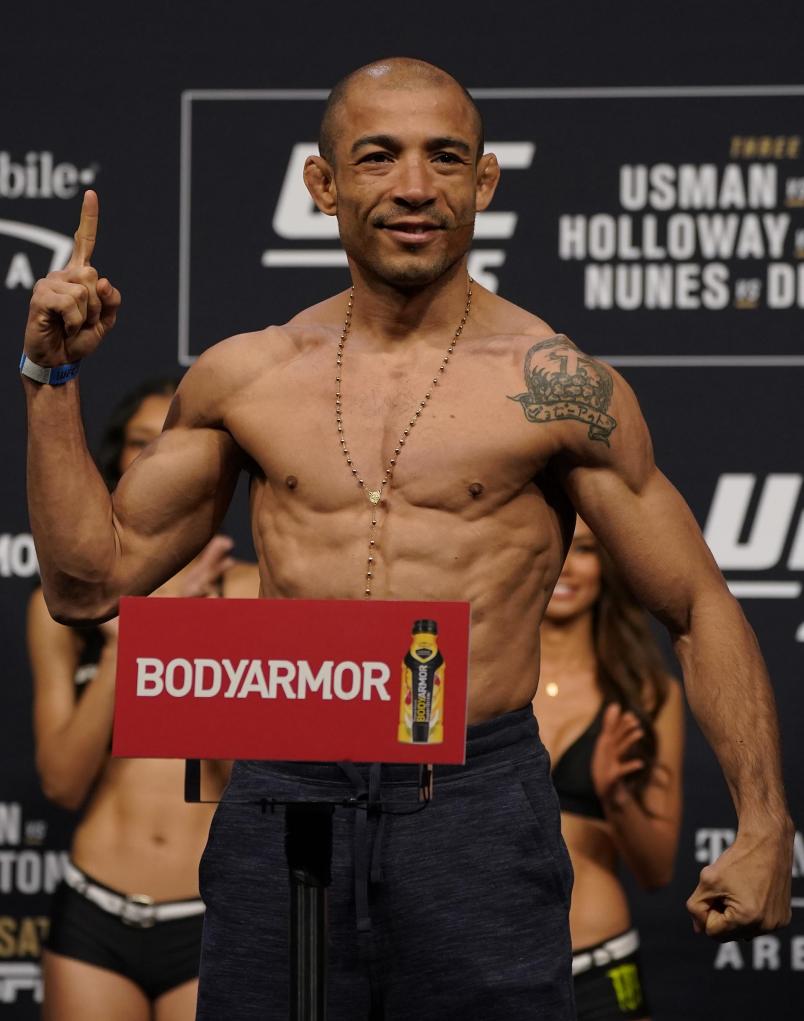 After weeks of playing into the perception that he didn’t have ten pounds to lose and the ugly whispers that “Aldo doesn’t look so good,” the Brazilian smiled mischievously as he stepped on the scales before last December’s UFC 245 bout against Marlon Moraes, unveiling a chiseled bantamweight frame that would make Tony Stark proud. One of the sport’s consummate professionals, Aldo always knew what he was capable of.

“Coach Dede [Pederneiras] has always said this is my weight class and that I should fight in this weight class,” confirms Aldo. “But now, from Saturday on, I’m going to start a new legacy and dominate this division.”

Saturday, of course, will usher in the “King of Rio”’s first crack at the bantamweight title when he meets Russian phenom Petr Yan at UFC 251 on Fight Island. Capturing the vacant 135lb strap could elevate an already storied career.

“First of all, the perfect outcome is me getting the victory, regardless of how it happens,” he says. “But I’ll be constantly looking for the knockout. I think everybody has been waiting for it.”

Should he defeat Yan on Saturday, he would become the eighth fighter in the history of the promotion to boast championship gold in two divisions. Special to be sure, but securing that honor is only part of the plan.

“I want to dominate the bantamweight division,” he says in no uncertain terms. “That’s why I want to stay in this division. I want to fight with the best and defeat them all. And when it’s all said and done, I can look back on what I’ve built.”

With 34 professional fights under his belt, he can already look back on what he’s built with a level of accomplishment felt by precious few in MMA. But looking back isn’t something he’s ready to do.

“When an athlete gets to this age, everybody says that it’s no longer their prime. But you can never say that about someone with the heart of a champion.”

When Aldo says “this age,” it seems like a good time to remember that he’s only 33.

“In the UFC, for example,” Aldo continues, “Randy Couture dominated his division in his 40s, when everybody thought he was done, so you can’t change that in the heart of a champion.

His coach can argue that bantamweight is his true calling, but Aldo’s work at featherweight is unsurpassed. With the wins and most knockouts in WEC/UFC history, nine post-fight bonuses and an almost-implausible 15-fight win streak, few of Aldo’s accomplishments are in any immediate danger of being bested by the current crop of featherweights. If he can transfer even a small percentage of that Octagon magic to his new division, Aldo’s story could warrant a superhero movie of his own.