Jose Aldo - Letting His Game do The Talking

"When I started my MMA career I looked at Pedro Rizzo and Chuck Liddell as fighters with the type of style I wanted to follow." - Jose Aldo 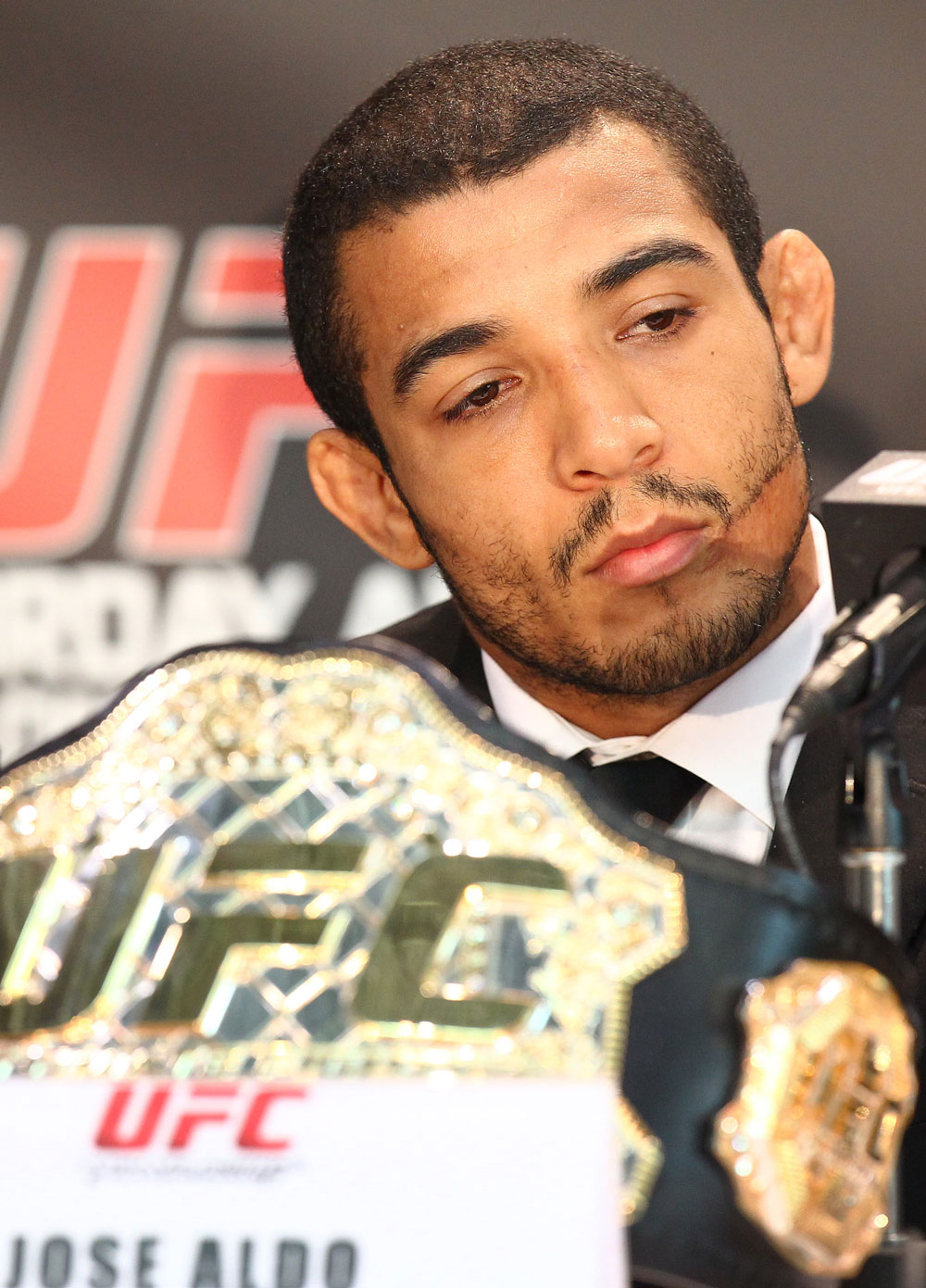 Try to strike against current UFC featherweight champion Jose Aldo - who defends his belt for the first time ever against Canada's Mark “The Machine” Hominick this Saturday night - and the odds of falling to the canvas unconscious are pretty high.

Of course, during a trade of bullets either fighter trying to smash the other in the face can get caught, but the numbers don't lie, as Aldo dispatched 13 of his previous foes in various strike-centric manners, including soccer kicks (under different rules), flying knees, combinations of punches, and low and high kicks.

But if you wait for a second and look in-depth at the 25-year old native of Amazonas, Aldo comes from a Brazilian Jiu-jitsu base, and his school, Nova União, is known for a solid background in the gentle art. It seems that his transition from the gi and submission grappling competitions to the MMA rings / Octagons skipped the ground aspect, and the confirmation is strong when you see his record, as his 18 wins, only one by traditional submission (his other submission victory came via strikes).

"I don't know what kind of ground work people want to see from me - it all depends on the opportunity," said Aldo, a BJJ player who definitely knows how to strike. "When I started my MMA career I looked at Pedro Rizzo and Chuck Liddell as fighters with the type of style I wanted to follow. I didn't want to be that guy who takes a fight down and works on the ground, and I thought it would be faster to get to the top by knocking people out because the publicity about my KOs would put me where I wished to be."

Being a fan of Liddell and Rizzo, two of the most feared strikers of all-time, isn't a guarantee that you'll get to brutalize foes like those two did. And Aldo knows it. But facing a good striker in his first UFC title defense, the Brazilian didn't polish his ground game to avoid a possible storm coming from the challenger. In a typical fight fire with fire philosophy, he traveled to Holland to sharpen his hands and feet with one of the best Muay Thai fighters on the planet, Andy “The Destroyer” Souwer.

"I think I have a good knowledge of striking, but I know I also have a lot to improve," he said. "I'm relentless in searching for knowledge and I thank God this chance to travel to Holland appeared. Souwer welcomed me and I learned a lot from this experience. The world is evolving and a fighter can't stop; he needs to look for the evolution all the time. We should never think that we're so good that we can't learn more. No, we need to capitalize on new things all the time, mainly in MMA, where the ground game, throws, and striking are growing. The only problem of my trip to Holland was that my time there wasn't long, so I'm anxious to go back soon."

The training regimen for a champion defending his title for the first time needs to be tougher than ever and it needs to prepare the fighter not only physically and technically, but mentally as well. For Aldo, who will face a hometown idol in front of 55,000 fans, the pre-fight rituals that he has followed since his start in the WEC helps him to avoid the pressure. That means when he avoids the pre-fight staredown, it isn't a signal of feeling unwell seconds before the action starts, but to make sure those important seconds are his own.

"When we sign for a fight, we know we're going to face a guy for 15 minutes or less or 25 minutes or less when you're in a title fight, so I try to stay as long as I can concentrating  before we touch gloves," Aldo says of the ritual that takes place during the referee's final instructions. "I don't look in the guy’s eyes; I have my body and my soul in synergy, and this is the last time I get to have this moment of concentration before I rock and roll against my opponent."

As for the possibility of the biggest crowd ever at a UFC event booing him, he says, “There can be 55, 60, or 100,000, but when the cage door shuts it is only me and Hominick, and people don’t realized that I only fought at home three times in 19 fights," he said. "The good part of only speaking Portuguese fluently is that I can't understand anything coming from the hometown crowd, so this won't influence my mindset."

With the fight closing in, Aldo begins to get his complete focus on the task at hand, but he has heard Hominick saying that the champion has never faced a striker of his caliber before. Aldo won’t use words to return fire though. He’s got other methods of proving a point against an outstanding challenger.

"I never got involved in a war of words or trash talking, but it is impossible to say that we don't hear what the opposite side talks about," Aldo says. "It is part of the game for each fighter, and for a challenger, he needs to promote himself. He can’t say 'the champ is the best, I can't face him.' He needs to believe in his tools. But I prefer to focus on my training and let my actions speak for themselves."