Jose Aldo Is Comfortable In The Role Of 'The Hunter'

With His First Bantamweight Win Under His Belt, Jose Aldo Feels Primed To Make His Run At The Division's Title At UFC 265: Lewis vs Gane
By E. Spencer Kyte, on Twitter @SpencerKyte • Aug. 5, 2021

Jose Aldo first walked out to Jay-Z’s “Run This Town” ahead of his WEC 48 featherweight title fight against Urijah Faber, the song selection serving as a message to the Sacramento native that despite his home court advantage, the Brazilian wrecking machine would be the one dictating the terms of engagement inside the little blue cage.

He’s stuck with the anthem for each of his 18 fights since, but something about the all-star team-up featuring a verse from Kanye West and Rihanna on the hook didn’t sound the same when Aldo marched to the Octagon to face Marlon “Chito” Vera back in December at the UFC APEX.

The town was empty, as COVID-19 restrictions meant events were held without an audience, and it felt strange to the 34-year-old, who returns this weekend in Houston in a Top 10 pairing with Pedro Munhoz and a packed Toyota Center to cheer them on. 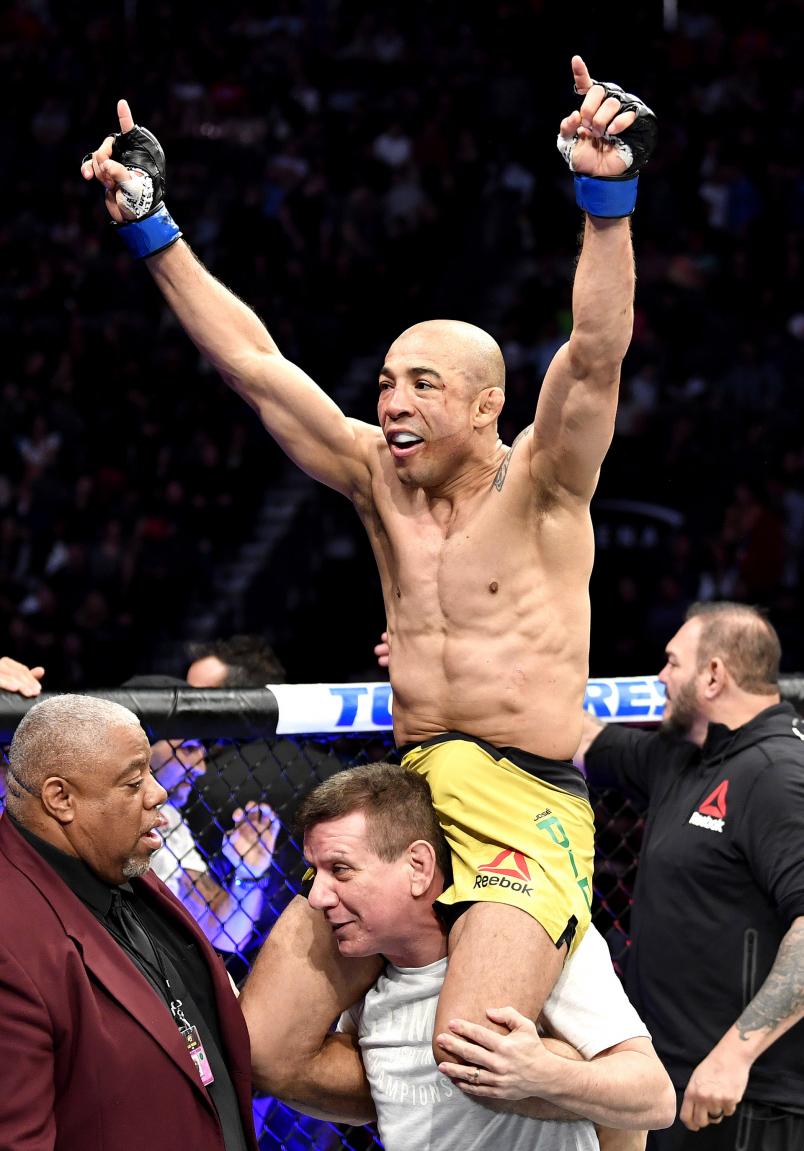 Jose Aldo of Brazil celebrates in the octagon after his bantamweight bout during the UFC 245 event at T-Mobile Arena on December 14, 2019 in Las Vegas, Nevada. (Photo by Jeff Bottari/Zuffa LLC)

While the lack of a crowd was the new wrinkle for Aldo, those watching the fight spotted a somewhat new approach from the Brazilian icon.

Running level with Vera through the first two rounds, the veteran took advantage of his Ecuadorian opponent’s aggressiveness at the start of the third, clinching up with the over-eager Vera as he rushed forward, securing a waist lock and climbing onto his back less than a minute into the final stanza. After adjusting his position, Aldo got Vera to the canvas and spent the rest of the frame stuck to his back like his name was Jansport.

The thorough control through those five minutes earned Aldo the round and the fight on all three scorecards, giving the former featherweight kingpin his first victory since relocating to the bantamweight ranks, and showing that he still has a few seldom used tricks tucked away up his sleeve for safe keeping.

“I’ve been trying to develop each time out,” said Aldo, who carries a 29-7 record into his showdown with Munhoz on Saturday night in Houston. “Everybody knew me from my striking, but I’m trying to use my jiu jitsu and everything that will give me the opportunity to be champion again.” 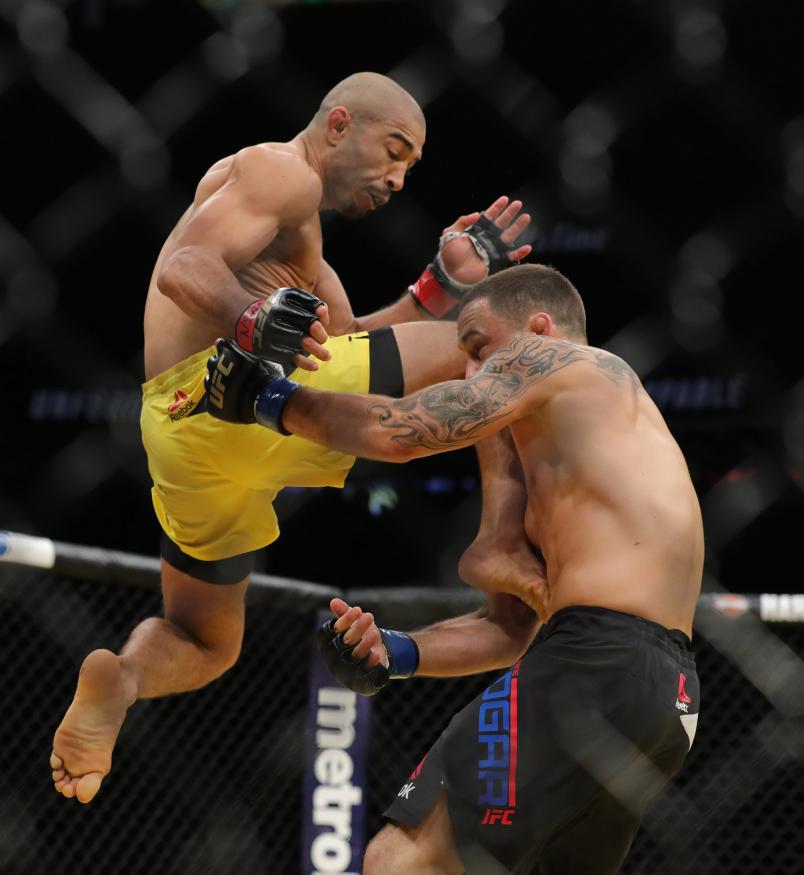 This weekend’s matchup with Munhoz comes complete with a number of interesting tidbits and tangential elements that add further intrigue to the pairing. It marks just the second time that Aldo has shared the Octagon with another Brazilian during his UFC tenure, and though the trajectory of their respective careers makes it feel like Aldo has to be several years older than his opponent, it’s actually Munhoz who is the older man, but only by two days.

Along with the curious bits of trivia, the penultimate fight on the UFC 265 pay-per-view main card is also a clash between Top 10 competitors with exciting styles, each man eager to secure another victory that brings them one step closer to challenging for championship gold in the ultra-competitive 135-pound ranks in the not-too-distant future.

“It’s a bit different, but it’s no problem for me,” Aldo said of facing another Brazilian. “We both have our dreams, our ambitions, and we’re both fighting to defend our sides, so it’s okay.

“What excites me the most is that we both walk forward and we both want to fight; that’s what I’m looking forward to the most in this fight,” the future Hall of Famer said when asked about the stylistic component of this weekend’s clash with Munhoz, who has earned Fight of the Night honors in three of his last four appearances. “I have to worry about his offense — his skills, his attacks; he’s very good — but I have to worry about attacking as well.

“We’re both guys from jiu jitsu, but we both love to strike, so I think that’s how it’s going to play out.” 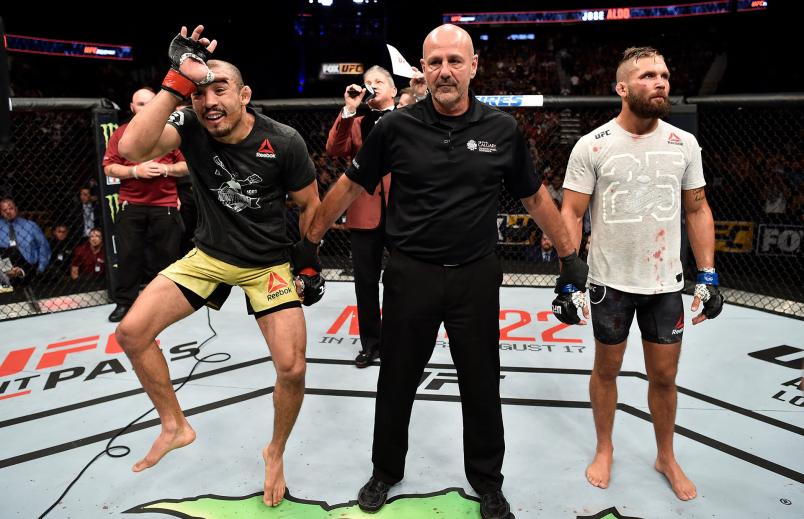 Jose Aldo of Brazil celebrates after his TKO victory over Jeremy Stephens in their featherweight bout during the UFC Fight Night event at Scotiabank Saddledome on July 28, 2018 in Calgary, Alberta, Canada. (Photo by Jeff Bottari/Zuffa LLC)

After spending the better part of a decade stationed atop the featherweight division and playing the role of “The Hunted” in the 145-pound weight class, the veteran now finds himself in an unfamiliar position at bantamweight where he’s one of “The Hunters,” part of a pack of contenders all jockeying for position in the title chase, hoping to establish their place in the hierarchy by the time things at the top of the division are resolved.

Though it’s not a position he’s been in much in the last 10 years, it’s one Aldo said he’s still comfortable in, likening it to his pre-title days in the WEC. 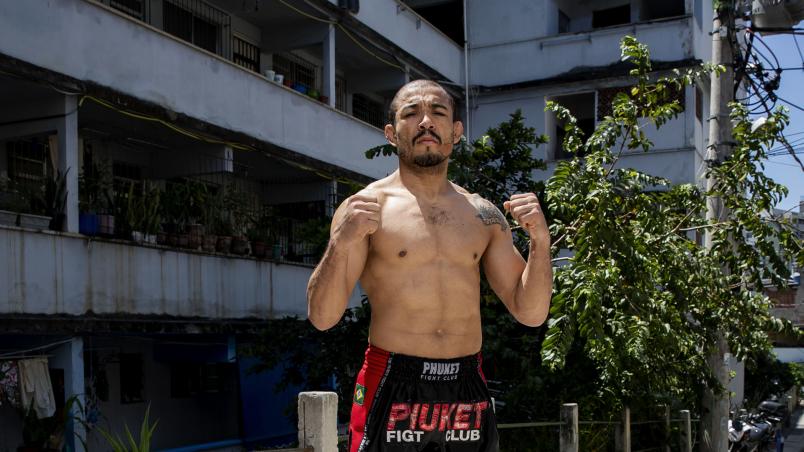 He’s already challenged for the bantamweight title once, losing last summer to Petr Yan in a battle for the vacant belt at UFC 251 on Fight Island, but now that he’s back in the win column, he’s ready to start making another push towards the title this weekend, bolstered by the fact that he’s a legendary talent who is never too far removed from a championship opportunity.

“I’m always next because of who I am, but I have to go fight-after-fight,” he said confidently. “(Facing) Pedro is another challenge, and after that, I believe I will have a big fight that will take me to the championship.”