Jose Aldo has a ‘new vision’ for rematch with Max Holloway

RIO DE JANEIRO - It is no secret that Jose Aldo is a simple man. It doesn't matter that he is one of the great legends of the MMA world - outside the Octagon, he is just Junior, as the most intimate of his friends and family call him.

This is always clear when the now featherweight title challenger makes public appearances. On Monday, he participated in a media day at the Upper Arena, Team Nova União's new home in Rio de Janeiro. The sleepy face and bare feet showed that Aldo didn't spend hours preparing to talk to reporters.

"I woke up late and came straight to the gym," he would confide to me later.

For several minutes, he discussed his rematch with Max Holloway at UFC 218 on December 2. Aldo was scheduled to face Ricardo Lamas at UFC Winnipeg on December 16, but an injury suffered by Frankie Edgar led to the opportunity to face the Hawaiian once again. But whoever thinks that giving back the loss suffered in June is the greatest motivation for the Brazilian is wrong.

"I'm happy not because of the rematch, but because I'm fighting for the belt. That's what motivates me, makes me wake up and train: being the champion again," he said, adding that having fewer days for the fight camp is not going to be an issue. 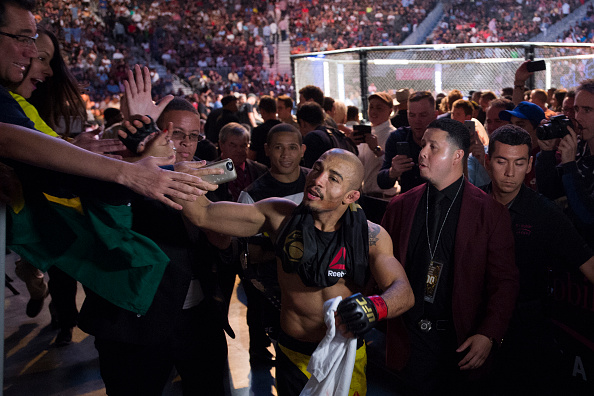 "The faster I fight again, the better. We had been training for four rounds, and we just put one more in. I'm motivated by the change, and it's not a problem. This time I feel more prepared than before".

Exuding confidence, Aldo guarantees a new vision for this attempt to recover the belt that was his for so long, and promises to show that he has managed to see a positive side of the setback and take advantage of it.

"I have a new vision. I want to fight, I want to go forward all the time, and you can be sure, of one thing: this fight ends as soon as possible."