"I'm not just a champion of the early rounds; I'm the champion because I fight and pass through the challenges that are present." - Jose Aldo 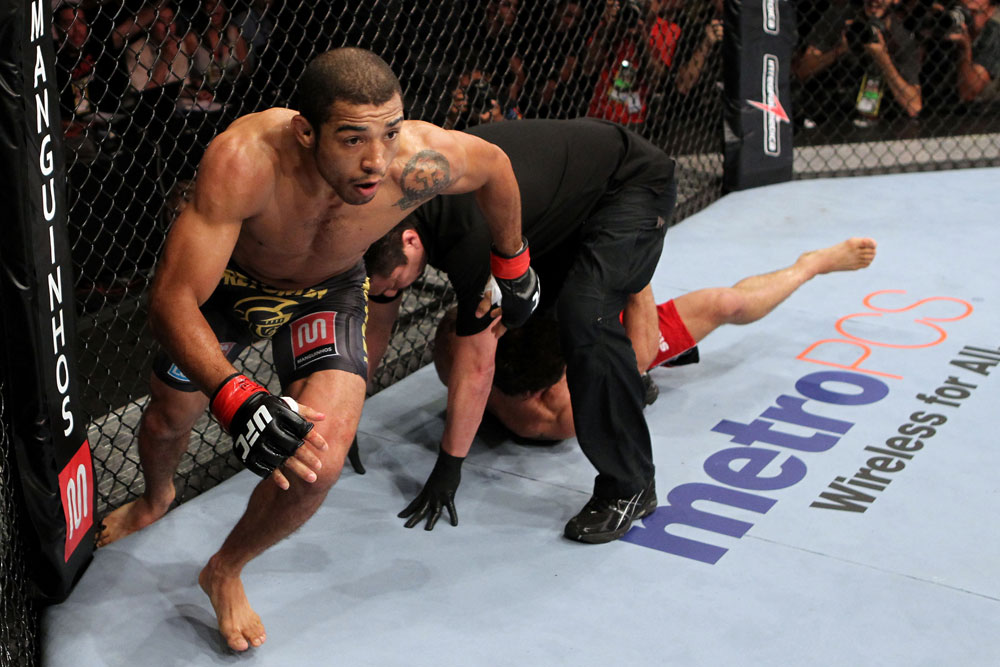 The last time the king of the featherweight division, Jose Aldo, was featured in our news section before his fight in January of 2012 against number one contender Chad Mendes at UFC 142, he alerted us on two matters, both of which came true.

“He [Mendes] will lose his undefeated record on January 14th; I see that happening,” said Aldo. “And if the KO happens, I'll have a surprise for the fans, indeed.”

Aldo laughed, but that surprise really was a surprise, as the product of Nova União squad ran across the cage after knocking out Mendes in the first round, passed through the opened Octagon gate and literally celebrated his victory on the shoulders of the Brazilian fans in the crowd. (Watch his victory celebration)

He promised and he delivered.

“Yes, I did,” he says of the promise. “I had it on my mind already. The people, they were having a pretty animated party in the bleachers, so it was great to celebrate with them and they got real pumped.”

Aldo revealed that everything he did was very well planned, with only his wife Viviane and translator/friend Derek Kronig Lee knowing what was going to happen. Lee tried to dissuade Aldo of this mad idea, but the champion says that since he didn't tell us before the fight what he'd do, only saying it would be a surprise, the fact is…

"If I knocked Mendes down, I'd run (laughs) to the fans," he says. "Andre Pederneiras (his coach) didn't know about it, because he could stop me. But at the end of it all, it was a beautiful and historic celebration with the crowd."

The commotion caused by his post-fight run was small if we compare it to what happened to Aldo later in 2012. The sequence began with the birth of his first daughter, Joana, an injury that sidelined his opponent Erik Koch from a UFC 153 bout and brought Frankie Edgar to the table, and then his own injury from a motorcycle accident which sidelined the champ for the rest of the year. He tried to describe the ups and downs of the last 12 months, a difficult task because this is a man who only wants to fight.

"[Breathes deeply] Piece by piece, like a fighter, I didn't change due to Joana's birth; I'll keep myself hungry and focused on my job. But it's hard to talk about all those events because I don't like to mix my private life with my professional life. Joana was born and changed my life. This is one more responsibility, and becoming a parent is the dream of every couple and thank God our time has come and it added a bunch of happiness to our home.”

"But if I stop for one moment to think about what happened to me (in 2012), besides the birth of Joana, I'll get crazy. Koch, Hatsu Hioki and perhaps "Korean Zombie" Chan Sung Jung could have been my challenges and none of them are in front of me. Frankie Edgar will be though."

The Superfight against Edgar is the main event of UFC 156, scheduled for Saturday night in Las Vegas. Everybody wanted to see this fight, and everybody wanted to book it, either at featherweight or lightweight. The buzz of Aldo going up to 155 was huge, but once Edgar lost his rematch against Benson Henderson and Koch was forced out of the bout with Aldo, the Brazilian will welcome the former lightweight champion in his seventh consecutive title bout.

"The division was packed once again, but I knew if he lost his rematch against Bendo, he'd drop to 145," Aldo told. "The fans say they expected this fight, and I do too. This is a dream match for me, because the man had an excellent history during his lightweight times and now we'll see what will happen."

Since the beginning of the UFC career of "The Answer" in the 155-division, people said he was too small for the peers. He answered by beating BJ Penn twice and Gray Maynard once. After two defeats in very close fights with Henderson, Edgar is in the weight class everybody wanted to see him compete in - featherweight. Aldo believes the New Jersey native is tough as nails, but that all the advantages are in his hands as he game plans for the former lightweight champion.

"He didn't cut too much weight for the lightweights, but now he needs to," Aldo analyzes. "The speed here [at 145] is a key factor too. He was fast at lightweight, and trying to emulate a few moves and the pace he set can open the gaps for counter attacks and things like that. So let's see what happens."

As for the assumption that since Edgar put in nearly 29 rounds in his last six fights compared to Aldo’s 20 that the later rounds will belong to the challenger if it goes that far, Aldo disagrees.

"Everything can be talked about and seen, but when the door locks there are many options for a fighter," he said. "Before my fight against Urijah Faber in WEC, people said that if he pushed me to the limit of the fifth round, I'd break. But I did it and I did it twice in the UFC, proving I'm not just a champion of the early rounds; I'm the champion because I fight and pass through the challenges that are present."

So we have to ask, will Aldo have a new celebration if he wins?

"If God permits, I'll bring the victory and I'll dedicate it to my daughter. What will it be? A surprise once again, but I promise nothing to get my manager and my coach mad.”