"I have a competition with myself. If the last fight ended in the third
round, this fight I want to finish in the second round, and so on. I
want to be better than I was before.” - Jorge Santiago 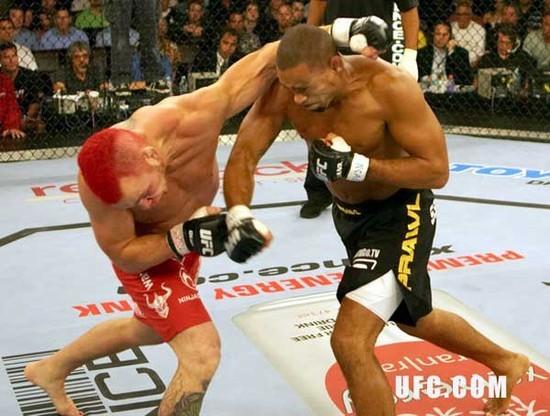 When Brazil native Jorge Santiago returns to the UFC for the first time in over four years this Saturday to face Brian Stann, he does so not just with a new nickname, “Sandman.” In fact, the man stepping back in the Octagon in Las Vegas bears little resemblance to the one last seen on the wrong end of an Alan Belcher head kick in 2006.

That’s the scary part for Stann and the rest of the middleweight division, because unlike many fighters who respond to a cut from the UFC with a few wins on the local circuit against B-level competition before looking for a call back, Santiago packed his bag and went to the woodshed, fixing what he knew was broken during a 1-2 UFC stint.

A pro since 2002, Santiago was talented but erratic when he made it to the UFC and the talented side was evident when he blasted out Justin Levens with a knee at Ultimate Fight Night 5 in June of 2006. But erratic came creeping back into the 25 year old’s life in his next two bouts, as competitive showings against Chris Leben and Belcher ended up in knockout losses. He didn’t complain when he was released from his contract though.

“As fighters, we need to get results,” he said. “If you don’t get results you’re not gonna stay in the same place. What happened was I lost my concentration for a second, and in mixed martial arts, every second you lose concentration, you pay for it. I don’t complain; I’m angry with myself because I lost and that’s the price you pay for not being professional at the time.”

Thus began the road back, and what a road it was. Santiago fought 12 times since his UFC release, winning 11. He avenged his lone loss during that stretch (to Mamed Khalidov), and his opposition included eight foes with UFC and / or PRIDE experience. He even fought twice in one night twice, first during STRIKEFORCE’s Middleweight Grand Prix in 2007 and then in Sengoku’s Middleweight Grand Prix in 2008. He won both tournaments.

“Getting ready for a tournament, you never know what’s gonna happen,” he said. “You can finish your fight in 30 seconds or you can fight two hard rounds and then come back and fight two more, you never know. I was just trying to sharp and not hesitate if I had the chance to finish the fight. You don’t think about holding yourself back, and I think that’s why I performed well. I didn’t have anything in my mind except to go in there, finish the fight as soon as possible, and if you don’t, don’t worry, your time is gonna come.”

Would he do it again?

His crowning glory was yet to come though, as he engaged in a five round war with PRIDE vet Kazuo Misaki in an August 2010 battle for the Sengoku middleweight title. Hitting all Fight of the Year lists, Santiago scored a stirring fifth round stoppage of the Japanese star, and after he asked for – and received – his contract release in early 2011, he was on his way back home.

“I always had that in my mind to come back one day to the UFC,” he said. “I left to get more experience training in other places, and fighting with other guys in other organizations to make sure I reached that level where I could come back and prove myself again. I’m reborn as a fighter now and getting back to the UFC was always something I had in my mind to achieve. Now I can reach my full potential.”

His first showing will be against Stann, a former WEC light heavyweight champion who struggled at 205 in the UFC before finding his true place at middleweight. 2-0 at 185 pounds with finishes of Mike Massenzio and Chris Leben, Stann has the type of reputation, respect, and name that Santiago craved for his return to the big show.

“This is a fight that’s going to put me back in the mix in the UFC,” he said. “Every time Brian Stann fights, he shows everybody his improvement, and he’s always getting better and better. On the other side, I feel more experienced than him, but I feel honored to fight him. He’s a US hero, a US Marine, and I love America as much as he does. I came here in 2002 and I have a great life. I want to prove myself fighting one of the best guys and the fans consider him one of the best coming up and a new star right now, so I couldn’t ask for a better opportunity.”

It is an interesting place for Santiago to be in though. The diehard fans know who he is and are expecting a lot from him this time around. Casual fight followers aren’t likely to know him, so anything he does positively from here on out will be gravy. But that’s the outside look. From the inside, Santiago knows that his biggest battle will be with the man in the mirror.

“I never got inside the ring or cage and went ‘today is going to be the best fight of my life,’ or ‘today I’m going to get the best knockout,’” he said. “I just go inside and I have in my mind that I will leave everything inside the cage and I will do my best to finish this fight. I just want to prove myself. I don’t try to beat only the guy, I try to beat myself. I have a competition with myself. If the last fight ended in the third round, this fight I want to finish in the second round, and so on. I want to be better than I was before.”

All signs would say that he is much better than he was in 2006, and he’s left a pretty impressive victims’ list behind to get here. Santiago has completed his studies. Saturday night is graduation day.

“There are no easy fights in the middleweight division,” he admits. “But I think now is the best time for me to get back to the UFC and finish my career. This is my ultimate challenge.”