"They're going to start calling me the ‘Truth Mission’ because I'm going to find out who is real and who is not." - Jorge Masvidal 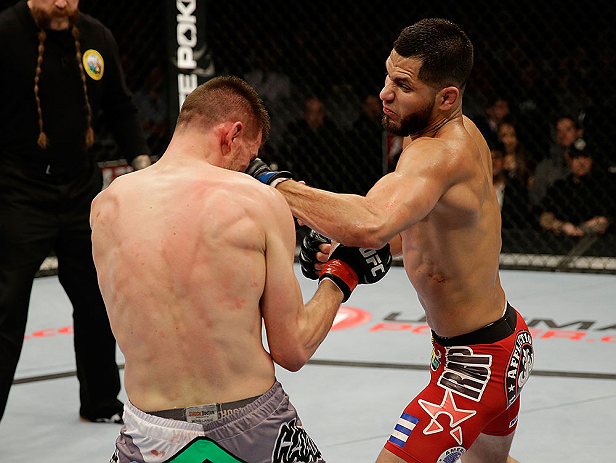 Gift giving can be stressful.

Whether it’s buying something special for Mom on her birthday, planning a romantic evening for your wife on Valentine’s Day, or choosing that perfect present to make a child’s Christmas morning magical, the process can be quite strenuous. But there are a few people out there who are single-minded and vocal in what they want, which makes it very easy to get them that ideal gift.

“When my manager called and said that I was getting [Michael] Chiesa, I felt like a kid again,” explains Masvidal. “I was like, ‘Man, I'm getting so many fights. This is awesome!’ I haven't had that back-to-back, staying busy in a while and I was just ecstatic. I want to thank God and [UFC matchmaker] Joe Silva for giving me that opportunity to fight again. I felt like I was eight years old and it was Christmas and I got a bike! I was just excited. I don't care who the opponent is at this point; I know I'm getting paid and I know I'm going to kick his ass. If it would've been a top 10 fighter, even better, but I'm just happy to be fighting. You don't understand how happy I am just to be fighting.”

At 28 years old with a professional record of 24-7, add Masvidal to the list of smiling Strikeforce converts who are thrilled at the prospect of battling multiple times a year inside the Octagon. Averaging three fights a year for the past decade, the over nine month layoff between Masvidal’s split decision win against Justin Wilcox last July and his UFC debut in April was, in a word, excruciating. For a born-fighter whose traveled everywhere from Trenton, New Jersey to Tokyo, Japan for some action, he has finally found an organization, a home, that can satisfy his thirst for competition, which will produce promising and entertaining results.

“I'm going to hit a stride in the near future,” asserts Masvidal. “When I stay busy, I become a different athlete. When I'm competing three, four times a year, I'm on my game. When I'm only fighting once a year and fights are spread out with eight months in between, it's hard to stay in shape and stay motivated in the gym. It's a mental thing. I should be able to stay in shape and motivated in the gym, but when time passes by and you don't have a fight, it's just like, whatever man. Now that I'm in the UFC, I'm going to be competing three, four times a year, I'm going to hit my stride, things are going to open up, and I'm going to show people what I can really do.”

What Masvidal means to do is be the in-cage crucible for the UFC’s stacked 155-pound weight class. The Miami brawler who originally gained popularity besting street toughs on the internet is nowadays a full-fledged, top MMA prospect from one of the most revered gyms in the world: American Top Team. Masvidal reached the pinnacle once before when he slugged it out with former Strikeforce lightweight champion Gilbert Melendez for 25 minutes, and he is ready to make a similar climb amongst the UFC’s ranks.

The first step on Masvidal’s UFC journey ended with a win, but began with an unfamiliar awkward start. While he has tangled in cages and rings all over the world, the UFC on FOX matchup against Tim Means was his first inside the Octagon. Maybe it was the long layoff or the ambiguous UFC “jitters”, but Masvidal’s usual pre-fight fire was replaced by lethargy. Almost as if he experienced “anti-jitters”, Masvidal was actually too calm leading into a fight with a 6’2”, up-and-coming Means who was riding a nine fight win streak.

“I was really nonchalant backstage,” says Masvidal. “I wasn't nervous at all. It was more like I wanted to be nervous. I wanted to feel jittery and nervous. When nerves come, a lot of times you get excited too. I was just lackadaisical. I was trying to get myself out of that sleep mode that I was in. I did a lot of sprints backstage. That's not usually how I am. I'm usually drenched in sweat before I step into the cage. It just wasn't happening and I was getting a little upset. I kept trying to push to get going. Maybe that was the way my body took to the nerves, but I didn't feel nervous. It was different.”

Once the cage door was shut and the action began to unfold, “Gamebred” took control of the fight by specifically scoring six of eight takedowns. “Obviously, because he had so much reach, I wanted to take him to the ground and stop him with ground and pound or catch him in a submission,” reveals Masvidal, who is far from content with his first UFC performance and is focused on delivering even more entertaining scraps from here onward. “One thing you can expect from me, heart. I don't care if a guy is faster or stronger than me or better than me, I'm not going to quit or look for a way out or look to a referee to get me out of a bad position. Every time I get in there, I fight.”

Up next for Masvidal, a July 27th showdown with The Ultimate Fighter: Live season winner Michael Chiesa at UFC on FOX in Seattle. The 25-year-old “Maverick” is undefeated as a professional with nine wins, including seven submission stoppages. The TUF winner with back-to-back rear naked choke victories inside the Octagon was set for a step up in competition by facing Reza Madadi, but a glitch with his Visa and Chiesa will now square off with Masvidal. As for his thoughts on his own quick turnaround and his opponent, Masvidal is curt.

“I don't know much about Michael Chiesa,” he admits. “I do know he won The Ultimate Fighter. I'm just going to go in there and kick his ass.”

For the better part of a decade, Masvidal has trained in the hallowed halls of Ricardo Liborio’s American Top Team gym in Coconut Creek, Florida. Under the tutelage of a highly-regarded coaching staff like Liborio, Kami Barzini, and Conan Silveira, ATT has consistently produced an impressive litany of UFC caliber fighters spanning every weight class. On top of that, ATT has become a destination spot for international talent of specific martial arts like Brazilian jiu-jitsu and Muay Thai kickboxing to come and train with the well-rounded fight team. With all these resources at their fingertips, the sky is the limit for Masvidal and ATT.

“My personal opinion, it's the best camp in the world,” affirms Masvidal. “We've got a lot of guys coming in and out of here from different camps and we've got a good group of core guys who are in there every day grinding. We'll get a black belt in from Brazil who just came back from the world championships and all this guy knows is jiu-jitsu. We've got guys coming in from Holland who want to come into MMA and all they do is striking and all they've done since they were 10 years old is striking. I've got the best coaches, the best teammates. Ain't nobody [expletive] with us. We're going to take over the world pretty soon.”

On July 27th, “Gamebred” will collide with “Maverick” in a lightweight clash to see who is a real contender in the 155-pound division.

“I want to show these make believe fighters, these Myspace fighters, these Facebook fighters that there are some real fighters out here,” declares Masvidal. “There are some fighters that are scared about getting punched in the face; I'm not scared of getting punched in the face or getting tired in a fight. I like fighting. I'm not saying I like getting hit, but I sure don't mind it. I'm going to show Michael Chiesa what time it is. He's going to have to fight me. I saw one of his fights and I don't know if he's ready for all of this.”

With a victory over Chiesa, the only thing a two UFC win-having “Gamebred” would want as a congratulatory present is another fight to make it three.