Jorge Masvidal: The Bigger, the Better 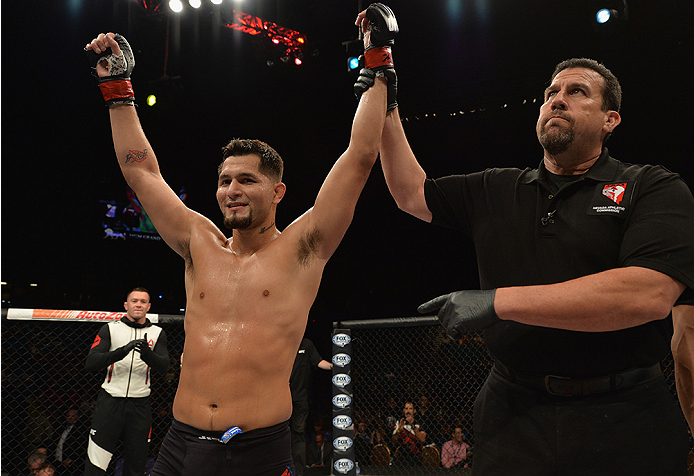 The bigger the opponent and, apparently, the bigger the weight limit makes everything better for Jorge Masvidal.

After going 5-2 as a UFC lightweight, the 12-year pro out of South Florida decided the juice wasn’t worth the squeeze to keep scrapping at 155 pounds. “It was like running through a desert to get to a fight,” Masvidal said of his previous weight cuts.

Only three months following his controversial split decision loss to Al Iaquinta, Miami’s Masvidal returned to the Octagon in July as a welterweight against The Ultimate Fighter: Brazil winner Cezar “Mutante” Ferreira and the results were big.

Actually, the results were huge, as in a first-round knockout plus a Performance of the Night bonus.

“I just feel way better at 170,” Masvidal said. “It felt great. With the weight cut for the past couple years, I’ve been wanting to go up to 170. I kept thinking I’m one fight away from that big fight. It didn’t happen. So, I thought let’s try something new. I would go to a weight that I would feel much more comfortable at and I would be able to perform. I was just getting upset at myself because there were a couple of guys at lightweight that I should have put away, but my energy just wasn’t there. When I was stepping in there this time, I felt like I was a different person. The weigh-ins themselves, I felt so great after and I hadn’t even rehydrated. I hadn’t felt like that in a while. It reminded me of what it was like to make weight and not feel so down. I knew whoever I fought that day wasn’t going to be safe.”

The 30-year-old looked right as rain at welterweight, pressing forward with punches, shrugging off a pair of takedown attempts and, immediately, getting back to his feet on the one takedown Mutante did land. On top of all the trademark Masvidal work that was present, “Gamebred” scored with an explosive elbow that led to his 11th career KO win, which was his first striking stoppage in over half a decade.

With an impressive win in his divisional debut, Masvidal set his sights on a bout that could have skyrocketed his stock - a co-main event clash with current #7 ranked UFC welterweight Dong Hyun Kim in Seoul, South Korea.

“I’ve been doing this a while,” Masvidal said. “I have way more experience, more fights than Dong Hyun Kim or most of the guys they could’ve matched me up with. I’ve been all over the world. The UFC is flying me out there to kick Dong Hyun Kim’s ass and I’m going to get some Korean barbecue, so I’m excited. Dong Hyun Kim is definitely a big opportunity for me to take, but the bigger the better for me. My goal is to go the fastest way up the ranks at welterweight. After this fight, if I get my name called in victory, I’m going to call out the biggest name I can put my hands on.”

Then things got even bigger and better for Masvidal as the American Top Team veteran was promoted to the November 28 card’s main event. Originally, the former three-time defending UFC lightweight champion Benson Henderson, who made his own successful debut at welterweight with a rear naked choke of Brandon Thatch in February, was tasked to tangle with perennial top contender and knockout artist Thiago “Pitbull” Alves. A couple weeks from fight night, Alves had to withdraw due to injury and his ATT teammate Masvidal is taking his place, marking his first UFC main event.

“He’s perfect for me,” Masvidal said of Henderson. “I’m probably better than him everywhere. If he puts me on my back, I’m not doing any jiu-jitsu. I’ll just get right back on my feet. I think I’m a better striker, I think I can stop his takedowns, and I think I can take him down at will. I just have to go out there and prove it to the world. I know that Ben isn’t ranked as high now, but it’s just a matter of fights because he would be ranked. There’s a lot of top 10 [welterweight] dudes I see that I know from fighter to fighter that Ben would beat. With his style and the way that he is, he would be able to impose his will on them and win. The fight’s awesome. I get to prove how good I was at lightweight, but we’re not fighting at lightweight.”

In preparation for Henderson, Masvidal has been putting his hours in with the world renowned American Top Team. Now at welterweight, he has been able to use his energy in sparring and training like never before instead of into road work to lose pounds. Some of the most intense training Masvidal endured was on the mats with the Oregon State University wrestling team alongside his ATT teammate, former NCAA D1 All-American wrestler and OSU alum Colby Covington. With experiences like that under his belt, he is confident he can keep the fight where he wants it - standing.

“I just can’t wait until he gets a hold of my leg or whatever he’s doing and he finds out that I’m not going to get taken down,” Masvidal said. “More importantly, I’m not getting held down. I might give up a takedown, but nobody in the world is going to hold me down. That’s not there. From one man to another, I’m telling you that doesn’t happen. No man is holding me down and taking away my will. I fight a lot of guys who are just kicking and running and staying away from me, but there ain’t no dude who is just going to hold me down and sit on me for three rounds. It doesn’t happen in my world.”

This Saturday in Seoul, Masvidal is ready to make a statement with a big win over former UFC champ Henderson. “I’m just excited to go to Korea to kick some butt,” he said. “My fans know I’m fighting, and I’ve got the most loyal fans in the world. My fans are hoping they put me as the underdog, so they can bet the house on me in this fight.”