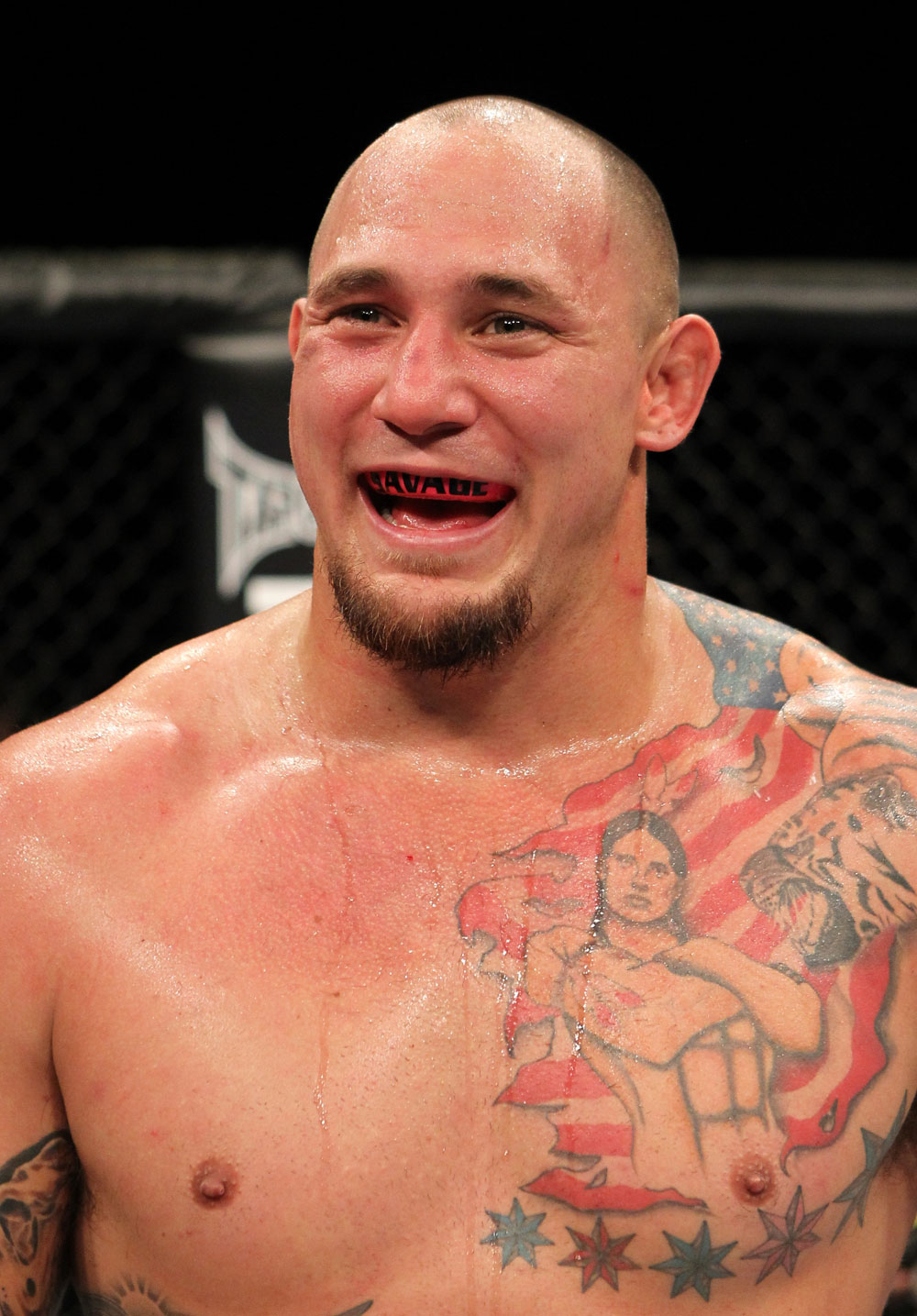 The hurt business of combat sports is one where the margin for nice guys is supposedly thin, but Shawn Jordan has never been one to care too much about boundaries.

The El Paso, Texas native has been lowering the boom on opposing competition in many forms and fashions since the days of his youth, but has never been one to subscribe to the belief that ill intentions have to be attached. While his big-bodied athleticism has been the primary factor that has set him apart from the pack for the majority of his time in competition, Jordan’s good natured disposition has also served to separate him from the norm as well.

In the minds of many, MMA is a sport filled with stone-faced tough guy types who work in violence and brutality, and while the latter portion may be true from time to time, the former LSU fullback turned UFC heavyweight doesn’t mind shaking up a few stereotypes along the way.

Does his job entail throwing hands, feet and knees at another man until one of them hits the canvas? It sure does, but that doesn’t mean there is any hostility lurking beyond the realm of competition.

“I think most people understand I’m a laid back guy,” Jordan said. “I’m cordial and nice to everyone. I’ve never had a problem with anyone I’ve fought inside the Octagon. Yeah, when the fight actually starts I’m there to do a job and I’m going to get to that, but I’m not mad at you and it’s never personal because it doesn’t have to be for me. They signed the same contract and agreed to fight. They had to go through all the same stuff I did to prepare. I get it.”

And though the open anticipation of conflict can be nerve-wracking, Jordan is one who does it with a smile, even though he’s quick to admit that he’s not entirely sure where that comes from in those crucial moments before things go live.

“There is a moment every fight where I think to myself how crazy this all is,” Jordan laughed. “It happens every fight. I don’t care who says what, but I guarantee it goes through the back of every fighter’s head where they are standing there at some point, wondering ‘Why the hell did I do this to myself? I’m going to go in there and get into a fight with another man I don’t even have a problem with.’ Then that lasts for a split-second and then the other side of your brain reminds you how much you enjoy it and to stop acting like you don’t. (Laughs) It’s such a mixture of emotions backstage because you are scared and excited at the same time.

“The mental fight is the hardest part because it becomes easy once the actual fight begins because you don’t have a choice anymore. You’re going to fight or it’s not going to work out very well, but everything leading up to it is a surreal feeling. Once the hitting starts, everything switches to memory. You instantly remember what you are doing, how to do it, and all of the little aspects of your opponent you trained for.”

While his penchant for starting out slow is something Jordan admits he’s been working on, one large jump in his overall game has been his ability to find comfort inside the Octagon. The heavy-handed slugger bounced back from a two-fight skid that ran into the early part of last year with an impressive three-fight winning streak that was made possible by his ability to adapt and excel in difficult situations. Not only were his back-to-back Performance of the Night-winning outings great for his bank account, but they also signaled his transition to a deeper tier of competition in the heavyweight ranks.

Jordan credits his recent accomplishments to him finally finding his rhythm in the rapid-fire and uncertain world that comes with competing at the highest level of mixed martial arts. Half of his six years as a professional fighter have been spent slinging leather under the UFC banner, and that’s a fact that tends to get lost on most.

Yet even though he knows there are still many areas he can expand upon in his arsenal, Jordan is happy with the progressions he’s made in the past 18 months.

“I am getting more comfortable with how to handle myself and use the skill sets I’ve learned,” Jordan said. “I feel like a better overall fighter all together and I’m actually enjoying competing more. I haven’t been fighting all that long, but I have been competing my entire life. I needed to get the hang of it and I believe I’m reaching that place. I’ve always had great coaches throughout my career, but right now I feel like I’m surrounded by a great group of people who allow me to keep focused on what I have to do and not worry about all the rest of the crap outside of fighting.

“That’s what makes the elite guys elite. They have been doing it for so long they become comfortable doing it. A guy like Cain (Velasquez), even though he may not be fighting regularly the entire time, he has a ton of mat time to fall back on. He has more mat time invested than most guys could ever dream of making up. Fortunately for the rest of us, we are athletic and have enough time to adapt to these new skills.”

Jordan has built a healthy head of steam heading into his upcoming bout against Ruslam Magomedov at UFC 192, and this go-round there is added appeal in the task at hand. In addition to having the opportunity to knock off a highly touted prospect in the Dagestan-born heavyweight and take a jump up the divisional ladder, Jordan will also be looking forward to getting to do his thing in front of the rowdy contingent that turns out when the UFC comes through Texas.

A born and bred product of the South, Jordan’s love and ties to the region run deep, and he’s fired up to compete in front of such a dedicated and passionate fan base.

“I’m really excited about fighting in Texas and back in the South. When it comes to fight fans, they are generally pretty good to everyone who competes. It doesn’t matter if you are the hometown guy or not; they are going to cheer for you if you put on a good show. Now in football, that absolutely is not the case. They will hate you if you are not playing for their team,” Jordan laughed.

While Jordan believes he’s getting closer to settling into his groove as a fighter, there are still plenty of aspects of his job beyond the Octagon that continue to catch him off guard. Having played at one of the most prestigious college football programs in the country certainly served to make him aware of the trappings that can come from public recognition, but it was a far cry from the strangeness he’s encountered since joining the UFC ranks back in 2012.

His love for fight fans around the globe is sincere, but it’s in that collective where Jordan has witnessed things beyond his comprehension. In some cases, those encounters have come in a far more up close and personal manner than he’d like, but even with the occasional bit of friction, Jordan has refused to allow anything outside of his control to chip away and his positive and upbeat demeanor.

He knows the public image of fighters evokes something far different than most embody, and Jordan has had to flex his patience muscle on more than a few occasions to help those who were trying to help themselves find a quick payday.

“For someone to get me to fight them outside of me getting paid for it takes some extreme effort on their behalf,” Jordan explained. “I’m just a nice guy and want to have a good time, but there have been incidents where some guy is just downright determined to start something with me. I was in Minneapolis for the UFC card where Travis Browne fought Bigfoot Silva and we were at some viewing thing or after party thing and some guy just hit me in the face. I was like, ‘Whoa man! I don’t even know you. (Laughs) You win. Let’s have a beer.’

“With all of this social media and instant gratification stuff going around, I think people have really lost the fact there are consequences to what they do. Not only that, but they rely on their protections once they cause a situation. Like that story where the robber fell through a ceiling and fell on knives in a kitchen and turned around and sued them because he got hurt. That’s the mentality people have nowadays. Some dude thinks he’s a gangster because he’s going to walk up and hit a UFC fighter but he’s really doing it because he believes we won’t hit him back because that’s assault and a huge deal because we are professional fighters.”

Even though Jordan’s natural instinct is to avoid conflict outside of his progression, his ability to keep his temperament about him when an outside force is attempting to escalate things is just a further sign of his overall maturity and self-awareness as a professional athlete. That said, he’s also very much tuned in to how the dialogue would change if he were to throw his good intentions out the window and hand out a few servings of comeuppance.

“Those types forget we are people too and we want to go out and have fun just like everyone else. If some guy in a bar knows who you are and wants to try to impress his dumb friends, then he’s going to try to do something stupid.  And the craziest part is that they know they can’t fight and will get hurt badly if something goes down, but that still doesn’t stop them because I suppose the idea of a lawsuit outweighs getting beaten up in their mind.

“If I were to snap and beat you and all of your little friends up, I look like the bad guy, even though you did more than enough to warrant that reaction from me. The story wouldn’t be man defends himself from being attacked. It would be ‘UFC Fighter Shawn Jordan Goes Crazy and Beats up Everyone at Applebee's.’ It’s crazy because I’m not that type of guy at all. I’m good to everyone and I just so happen to fight for a living. I’m the nicest guy in the world and I’m easy going. I always have a smile on my face, but some people would rather be stupid than happy I suppose.”