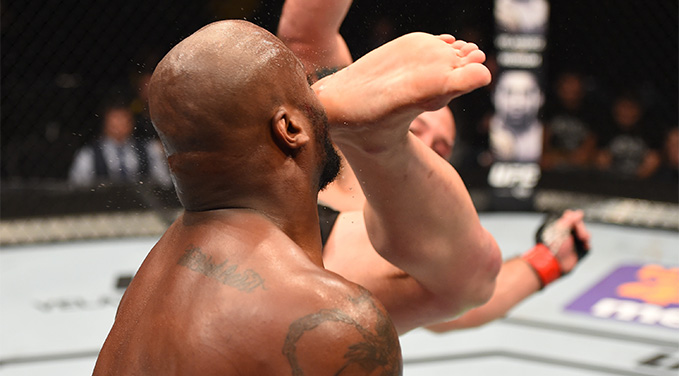 The Battle of Louisiana was won by Baton Rouge’s Shawn Jordan Saturday night at the Smoothie King Center in New Orleans, with the former LSU fullback knocking out NOLA native Derrick Lewis in the second round.

Lewis (12-4 with 1 NC) drew first blood to kick off the fight, landing a right hand and then clinching against the fence. Jordan recovered quickly and threw Lewis to the mat, scoring with some elbows before Lewis rose and the two broke. With under three minutes left, Jordan took Lewis to the canvas again, wearing out the big man from New Orleans, who was able to rise a second time. All of a sudden with a minute left, a slugfest broke out briefly, Lewis getting the better of the exchange as he cut Jordan over the eye. Jordan did end the round with a third takedown, aiding his cause on the scorecards.

Jordan (18-6) closed the show quickly in the second round, rocking Lewis with a hook kick and following up with a series of ground strikes that brought in referee Gabe Barohona to stop the fight at :48 of round two.
“Any victory in the UFC is huge," Jordan said. "To be able to compete at this level and do well, that’s just what I want to do. I want to keep winning and keep getting bigger fights. I want to get guys in the top 10. I did well, so I hope I get another opponent quick. He kept dropping his right hand, so I went on a whim and tried the kick and it worked out pretty well."

The two fought in 2010 as well, Jordan winning a three-round unanimous decision. 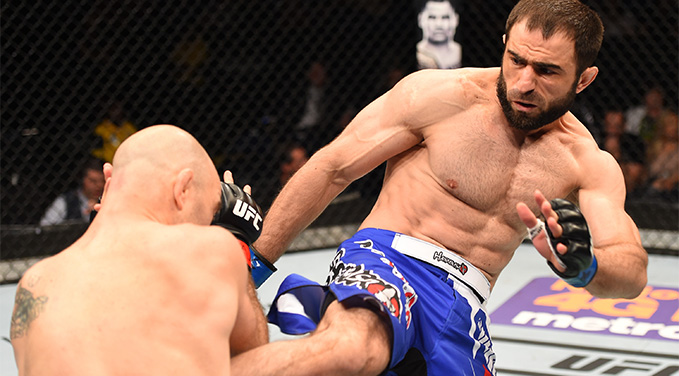 Welterweight up and comer Omari Akhmedov spoiled Brian Ebersole’s 70th pro mixed martial arts bout, as he scored a TKO win over the veteran, with the bout stopped after the first round due to injury.
“Honestly, I wanted this fight to go the distance," Akhmedov said. "It happened like this, and you never know. I’d like to get back in there as soon as possible.”

Leg kicks were the weapon of choice for Akhmedov in the first round, and once he had Ebersole looking for them, he moved his attention to the head with his punches, with the veteran providing little offense in return. The reason for this was explained as soon as the round ended, as Ebersole retired in the corner due to an injury to his right knee.
Indiana's "Bad Boy" may have fought his last bout as well, saying “I'm old, everything hurts. A lifetime of wrestling takes a toll on you, getting your head pulled, knees banged up - I'm going to leave it to the young guys now. That's it for me.” 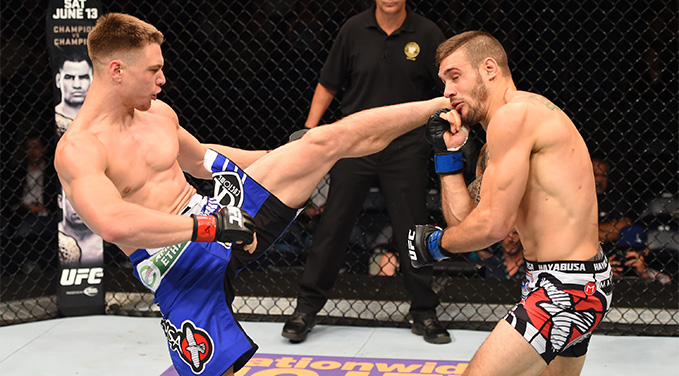 In a meeting of lightweight prospects, it was Long Island’s Chris Wade picking up the victory, as he won a three-round unanimous decision over Christos Giagos.
“Getting a win over a tough opponent like that was a test to my will," Wade said. "It was a lot of back and forth. I thought my stand-up improved. I would say this was my best performance. I think I put it all together a little bit more. I'm still developing, I’m young in this sport. In November, it will be my fourth year in the sport total. I have a lot of growing to do and a lot of learning to do, but this was a step in the right direction.”

Outside of a brief moment where Giagos sent Wade to a knee with a right hand to the head, the first round belonged to New York’s Wade, who took his foe to the mat twice and displayed a sharp striking attack that opened up a cut over the Californian’s right eye.

In the second, Wade focused on his grappling game and picked up another round as he dominated the mat action.

After eating a couple hard shots from Giagos in the opening stages of round three, Wade took the fight to the mat once more. Giagos was able to work his way back to his feet, but fatigue kept him from mounting a comeback as Wade continued to control the grappling portions of the bout. 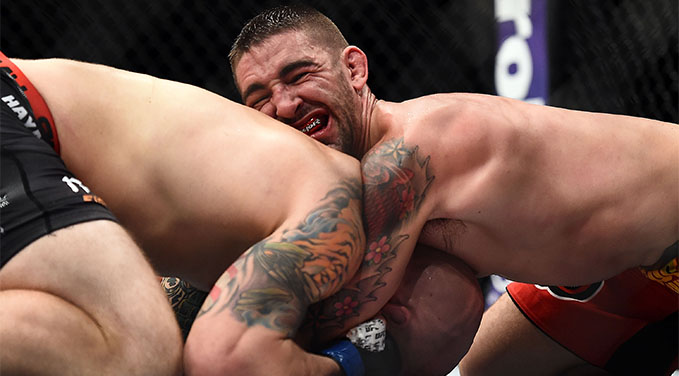 An entertaining lightweight scrap between former Ultimate Fighter competitors Joe Proctor and Justin Edwards ended in emphatic style for Proctor, who finished Edwards with two seconds left in the bout.

Both fighters slugged it out with bad intentions as the fight began, with Edwards also tossing in a takedown and some solid clinch work for good measure. The pace dipped after the hectic opening, with both fighters settling into a more controlled rhythm.

Edwards (9-5) provided more fireworks in the second minute of round two, as he scored with several hard knees while at close range with the New Englander. Proctor’s quick counters were paying dividends in a quieter manner, but a hard right hand followed by a brief takedown kept Edwards neck-and-neck with his foe, setting up what promised to be an interesting final round.

Proctor’s ever-improving striking was on display in the third round, as his pinpoint accuracy kept Edwards from getting too aggressive. In the final minute, Proctor (11-3) went from a hard flurry into a guillotine choke, and just before the final horn sounded, the Pembroke native put his foe to sleep. The official time was 4:58, making it the latest submission in a three round fight in UFC history.

“I didn’t know that was the latest submission finish until Jon Anik said it in the Octagon," Proctor said. "Now that I know, I think it’s unbelievable to have my name in the record books. It was a really close fight, I think I won the first, I think he might have won the second and going into the third my coach told me it was all or nothing – go out there and work your butt off or never fight in the UFC again. I was paying respect to my grandfather with this fight, so it was nice to get the win for him." 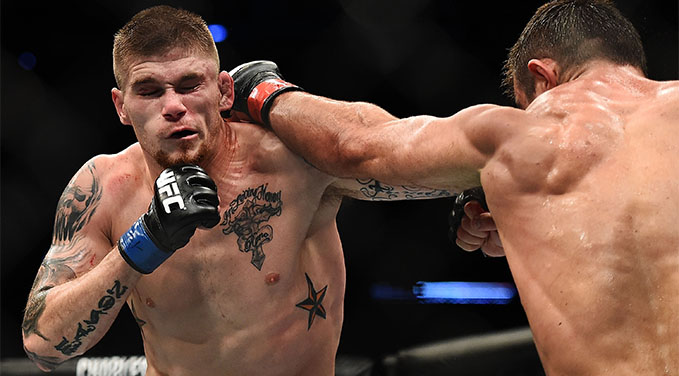 Middleweight prospects Jake Collier and Ricardo Abreu left it all in the Octagon for three rounds, with Collier emerging victorious via split decision in a memorable 15-minute battle.

"It was a sloppy performance, but I’m happy with it," Collier said. "It was a good war. I just get so excited when I’m in there, and I need to calm down. I'm just a kid from a small town, and when I get in there, I just want to try everything I’ve learned in the last three months. It was good to win, but I was really sloppy."

Defense wasn’t a high priority for either fighter in the opening round, which was great for the action-craving fans. And though Abreu was the harder puncher of the two, Collier’s busier attack evened things out.

Collier began to pull into the lead in round two, with his strikes beginning to bloody Abreu. The Brazilian was able to get a takedown in the final minute, but he wasn’t able to do anything with it before the horn.

The crowd gave an appreciative roar to the fighters before round three, and the two middleweights continued to give them a reason to cheer. Abreu scored with some hard shots in the opening minute and used them to set up a takedown. Collier rose to his feet quickly and got free, and while Abreu looked to be the more winded of the two, he landed with several hard punches, only to be answered back by Missouri’s Collier. Abreu was able to get another takedown with under two minutes remaining, but Collier got out of trouble quickly once more, flurrying as he assumed the upright position. Not surprisingly, the two slugged it out in the final seconds, capping off an exciting three-rounder.

"It was a great fight," Abreu said. "It would have been better with a different result, but it was a lot of fun. I knew it was going to be a striking fight, Jake was prepared for my takedowns. I wanted to put on a show for the fans. I didn’t want to participate in a fight with a lot of holding or that was boring – it was everything or nothing for me."

Quinonez worked hard for a takedown as the bout began, but when he got it, he landed in side control. After working to improve his position, Quinonez took Morales’ back, and in his second attempt at a rear naked choke, he got it, forcing the tap out at 2:34 of the opening frame.