Jordan Williams Put It All On The Line For The Contract

Jordan Williams was never going to stop until he got his UFC contract
By Thomas Gerbasi, on Twitter: @TGerbasi • Oct. 3, 2020

After coming up short of a UFC contract in his first two appearances on Dana White’s Contender Series, Jordan Williams knew what was at stake when he faced Gregory Rodrigues last month in Las Vegas for his third-go round on the show.

“I was thinking I might never get the chance (at a UFC contract), at least not via the show,” Williams said. “The third time's the charm, but also, the third time's also a strikeout. My first time at bat, I got a foul ball. The second fight was a full-on swing and a miss. The third swing, you gotta hit a home run or the next batter behind you is up to bat. That's the mentality I had going into this fight.”

Williams went yard, needing just two minutes and 19 seconds to knock Rodrigues out. That didn’t mean he thought he had the contract locked up on an episode where he scored the only finish.

“Hell no, I didn't think that,” said Williams, recalling his first fight on the series in 2018, when Josh Parisian scored a spinning backfist knockout of Greg Rebello but didn’t secure a contract. “He (UFC President Dana White) has witnessed the top-level competition for a long time now, so you don't know.”

The Californian didn’t have to worry, as White brought him into the UFC with a contract he breaks in on Saturday against fellow Nassourdine Imavov. It’s the happy ending to a story that had plenty of twists and turns, but through it all, notice that Williams never talked of walking away if he didn’t get the call to the Octagon through the Contender Series.

“You guys don't realize I was never going to stop until I got this,” he said. “It wasn't an option.” 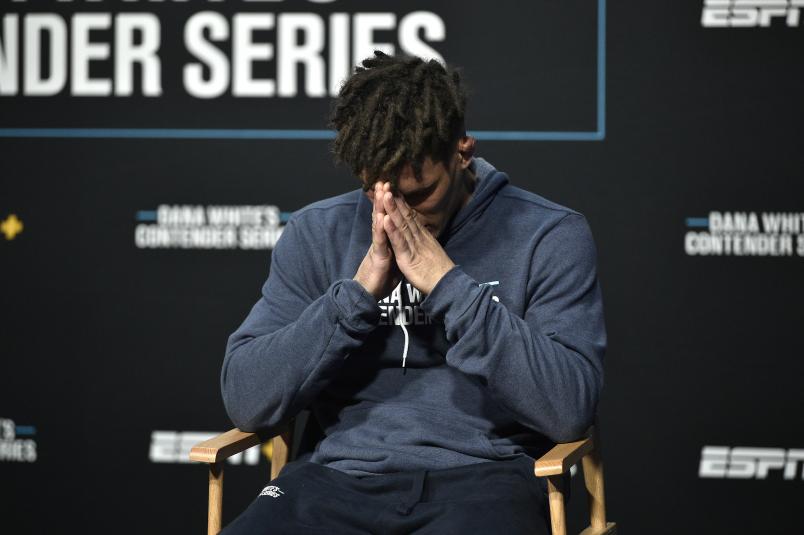 Not in 2018, 2019, or last month. No, Williams had come too far to turn back, despite the doubters coming at him from every side ever since he first put on the gloves.

“I've been told to quit since the start,” said Williams, a Type 1 diabetic who was initially misdiagnosed as a Type 2 diabetic. He received the incorrect diagnosis before a 2010 amateur bout with future UFC fighter Max Griffin that was scheduled for five, three-minute rounds. He went on with the fight and won it.

“I told the doctor I just started fighting and I like this,” recalled Williams. “He said, ‘Well, you're gonna have to stop that. You can't fight. You're diabetic.’ But I didn't quit, I won my first title against someone who was in the UFC five years before me and I just carried that weight. I've been told to quit from the beginning. So when I didn't get the contract the first time around and people were thinking I must be on the edge of quitting, I was so far from quitting.”

Two wins sandwiched around a controversial split decision loss later, and he’s here. I ask him how he can possibly get up emotionally for this weekend’s fight after the high of the last one so soon.

“I didn't even come down from the fact that I earned a UFC contract,” he laughs. “I did not sleep one second that night. I was sipping my Kool-Aid and I didn't even get to enjoy my flavor before they refilled my cup. Oh my goodness. (Laughs) But this is great.”

What’s even better is that the 29-year-old isn’t just fighting for himself. He’s fighting for anyone who’s been told they can’t do something.

“I've been influencing those kids to do what they want,” Williams said. “And now I feel like I just gave ammo to the parents. You know how hard it is to get a UFC contract? It's damn near the same probability of getting eaten by a shark. You think I'm done with this? You think I'm over? I got so much more to do now. I can't just go get my UFC contract, go 0-4 or 0-3 and get kicked out. My job is far from over.”