Jordan Vucenic Isn't Focused On How Much Hype Surrounds His Opponent, He's Only Focused On Victory.
By Walker Van Wey • Mar. 12, 2021

With the biggest fight of his career and the most notable opponent he’s ever faced just over the horizon, Cage Warriors featherweight Jordan Vucenic wants the whole world to know that Morgan Charriere is just another steppingstone.

With a record of 7-1 and a perfect 3-0 record in the Cage Warriors cage, Vucenic has had only two things in his crosshairs his whole career: Cage Warriors gold and a UFC contract. Vucenic’s chance at grabbing a Cage Warriors title is only weeks away at Cage Warriors 122, as “The Epidemic” will be standing across the cage from a fighter more famous than any other fighter outside of the UFC, Morgan Charriere.

Charriere’s tendency to go viral with every social media post is comparable to that of most NFL players. He is adored across all platforms and he’s so well represented, in fact, that you’re never just fighting Charriere - you’re fighting his entire fanbase as well. The cerebral, confident Vucenic believes this level of hype harms Charriere more than helps him.

“If anything, this just puts pressure on his part, I believe,” Vucenic says. “The French fans are just looking straight past me, straight to Morgan being the champion and moving on to the UFC so, if anything, all the pressure is on his side. A lot of his fans aren’t expecting anything to come of me. When we get in there it’s going to be a different story.”

While Vucenic has no ill will for Charriere, personally, he does note that Charriere’s path of YouTube fame has led to a fanbase that is loud, but uninteresting.

“A lot of Morgan’s fans probably couldn’t name, you know, ten MMA fighters,” Vucenic said. “They just know Morgan Charriere and because he’s French they’re just backing him. He could be doing anything. Probably half of them don’t even know Morgan Charriere’s a fighter. They don’t know what organization or anything.”

Going as far as calling Charriere “a French Jake Paul,” Vucenic does applaud Charriere’s way of marketing himself. Acknowledging that Charriere’s 100,000+ YouTube subscriber feat doesn’t come without talent, but there’s a difference between marketing and a love for MMA.

“I know that French MMA is going to get a lot bigger because it’s just being legalized and stuff like that,” Vucenic said. “I’m sure Morgan’s going to want to headline that Cage Warriors card there. He’s just in the sport for his own personal gain.”

Vucenic has little faith that he’ll get the respect he deserves if he wins. No matter the fashion, no matter the round, it just isn’t likely. He has an idea of how the fight will go, and even if he predicts the finish and carries it out, it’s a losing battle. The only bit of validation he’s after is the featherweight belt. 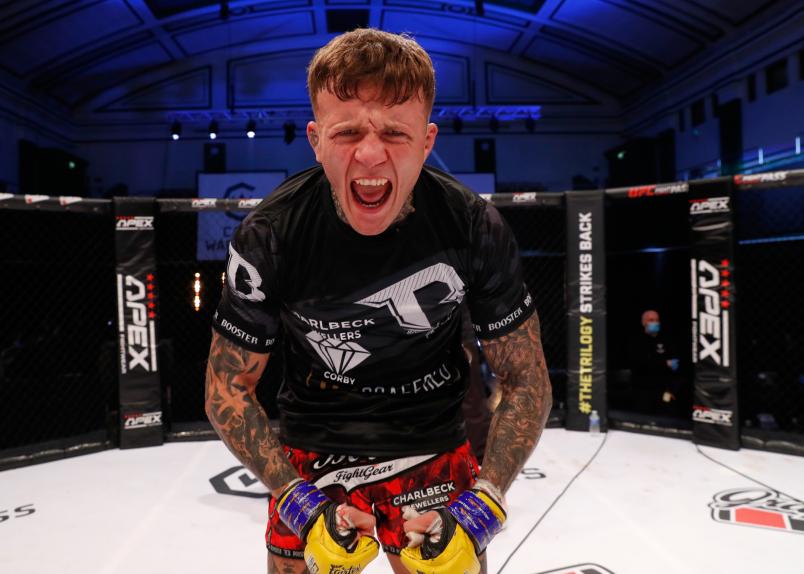 Jordan Lucenic Postes For A Photo After A Cage Warriors Bout

“I’m sure his fans are going to be saying, even if I won by head kick knockout, I’m sure they’d be saying it’s a fluke or it’s a lucky shot that I landed,” Vucenic explains. “I think they’re going to back him until the end so I don’t really take notice to anything they’re going to say.”

Although it seems like Vucenic holds hostility for Charriere, his tone is never emotional and he never speaks out of anger. He has had the best training camp of his career and is grateful for the opportunity in front of him. When you’re this close to capturing what you’ve worked for your whole life, it’d be foolish to let anything stand in the way now.

Vucenic does predict a finish within three rounds and will be a stone’s throw from the UFC, but nothing more. There’s no extra feather in the cap with a win over Charriere. He may be the most famous fighter he’s has ever faced, but in Vucenic’s eyes, Charriere just happens to be the next opponent.

“I don’t care about how famous he happens to be,” Vucenic said. “I don’t have any ill feelings towards him or anything. I’m not going to be imagining myself winning and being smug and thinking of him losing. It’s just that I’m so one-track minded on where I want to go, so it’s just another guy in the way.”