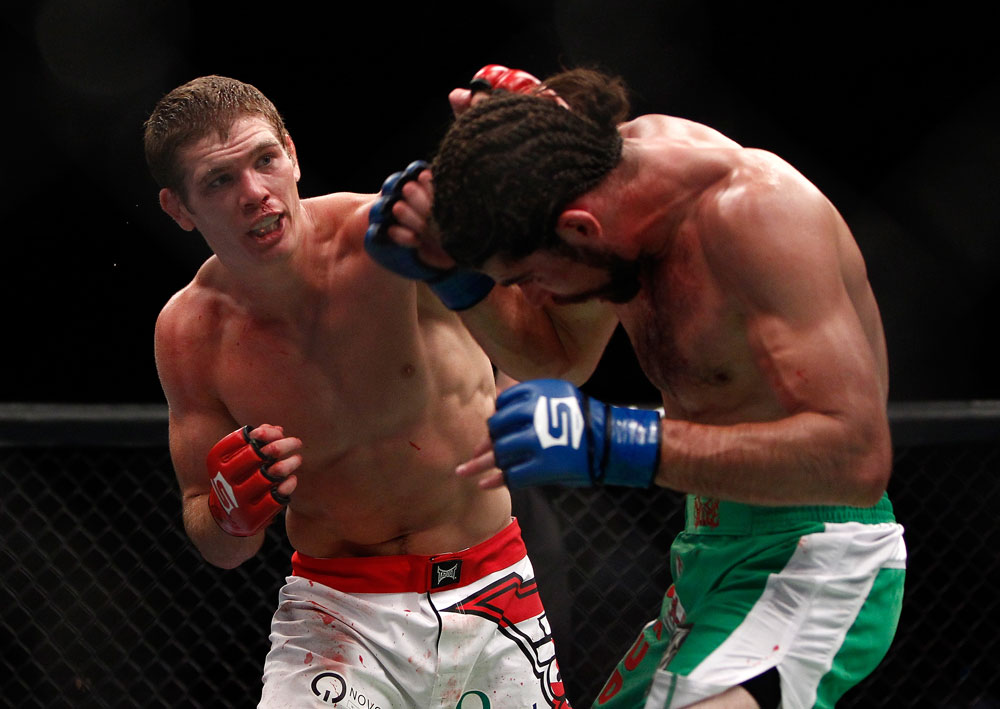 In a sport where experience and age are the two metrics used when determining if a fighter can be deemed a “prospect” or not, Jordan Mein makes the task a little more complicated than usual.

On one hand, the Lethbridge, Alberta native is just 23 years old, well within the acceptable age range for wearing the popular descriptor. On the other, one look at his resume shows that the UFC newcomer isn’t short on experience, having racked up 26 wins and 34 fights since beginning his career with a first-round loss to Rory MacDonald in June 2006.

Next Saturday night at UFC 158 in Montreal, the talented young welterweight will make his first trip into the Octagon to face off with Dan Miller. It’s a moment every fighter begins their career hoping to experience, and one that will mark the successful end of a well-executed plan concocted by Mein and head coach, manager, and father Lee.

“It’s super, super-exciting,” said the soft-spoken fighter on the verge of making his UFC debut. “The time is finally here, and I think I’ve fought the right people, and put in the right work, so it’s all paying off. All my goals are kind of manifesting themselves and I’m super-excited.”

Over the last few years, Mein has announced himself as someone to watch in the 170-pound ranks by repeatedly stepping into the cage with established veterans and recognizable names.

A six-fight winning streak that included wins over UFC veterans Joe Riggs and Josh Burkman, and former DREAM champion Marius Zaromskis earned him the opportunity to compete in Strikeforce. In his debut, the creative Canadian striker earned an impressive stoppage victory over former title challenger Evangelista “Cyborg” Santos, finishing the menacing Brazilian with a barrage of standing elbows in the third round.

After coming out on the wrong side of a split decision against Tyron Woodley, Mein rebounded with a decision win over Tyler Stinson before defeating another UFC veteran, Forrest Petz, in a fight under the Score Fighting Series banner in November.

“I think it has come together really nicely, and I’ve gotten to fight some top guys,” Mein said of his steady climb towards his first fight inside the Octagon. “I’m not one of those guys that hasn’t really fought anybody, and then I get in the UFC and I’m fighting Dan Miller. If I hadn’t really fought top guys or trained with top guys -- I think that gets people in trouble, but I don’t think I’m in that position. I think I’m ready for the best in the organization.

“Fighting those guys really puts that extra thing in your mind where you know you can beat the top guys, and how good you feel when you’re fighting them or if you’re finishing them. That really gives you some confidence, rather than knowing you fought guys that are 1-0 or 0-1, and you have an undefeated record. I think that really helps in the long run.

“Some guys do it and still go to the top – they still win – so I think it’s to each their own, but for myself, personally, it has really been key to my career.”

Not only has the amount of in-ring experience Mein has been able to accrue over his already seven-plus-year-long career been of great benefit to him, but his opportunity to headline a number of events in Canada and go through the rigors associated with being the biggest name on the marquee have also prepared him for life on the UFC roster.

While welterweight champion Georges St-Pierre made up half of the headlining act for the first UFC event in Ontario when he faced Jake Shields at UFC 129, Mein earned top billing on the first event held within Canada’s most populous province, defeating Burkman at the aptly named “MMA 1: The Reckoning” event in Orillia, Ontario on April 2, 2011.

“I think that is going to be a big advantage for me,” Mein suggested of his level of comfort with the media obligations, increased attention, and new situations that come with fight week. “Having been on that stage, having been on TV across America, and across Canada as well with the Score Fighting Series, having all that media exposure – if you’ve never done it before, it can take a toll on you.

“It’s given me experience, and it’s really put me in the right frame of mind, and the right attitude. I still have so much to learn when I go to the UFC and experience those new things as well, but I think it has done nothing but help.”

All of that experience has him uniquely prepared for the next chapter of his career, which starts in full next Saturday night at the Bell Centre in Montreal when he steps into the cage the elder half of New Jersey’s version of “The Fighting Miller Brothers” in the middle of the televised portion of the preliminary card.

Not many 23-year-olds get to walk into the UFC and make their debut against someone as seasoned and established as Miller, a fact that is not lost on the promising Canadian prospect.

“I think we’re on Sportsnet too,” added Mein, referencing the sports network that is home to UFC programming in Canada. “People know who Dan Miller is. Not too many people know who I am yet, but fighting someone that has a name is important; it’s much better than fighting someone no one knows who is just as dangerous.

“He’s a tough opponent, and I’m glad I got a tough opponent with a name. Everybody in the UFC is solid and not going to be easy to beat, so facing someone with good credentials in the organization is super-important.”

In the wake of the recent cuts that purged the roster of more than a dozen fighters, there has been increased discussion about the need for competitors to entertain when they’re in the cage. Luckily for Mein, that has never been a problem.

His striking repertoire includes an array of elbow strikes, and spinning attacks along with the standard compliment of punches and kicks, and 21 of his 26 career wins have come by way of stoppage. The Canadian Martial Arts Centre representative is ultra-aggressive inside the cage, willing to stand in the pocket and trade shots, confident he’ll get the better of the exchanges in the end, without being careless.

“There’s a fine line between going all out and being reckless or doing something stupid,” laughed Mein, addressing his offensive approach and the added pressure to deliver a fan-friendly fight that continues to mount.

“Finding that line and just stepping over it is what brings those entertaining fights together. That’s the tough thing about the fight game – those mental battles and those physical battles – and that’s why winning feels so good; overcoming all those things.”

After having proven his mettle on the regional circuit and made his way to the big leagues, Mein is intent on following in the footsteps of his fellow Strikeforce graduates this weekend by delivering an action-packed performance in his debut, and establishing himself as someone fans look forward to seeing through what the Canadian newcomer hopes will be a busy year.

“I think the fans can expect entertainment when we get in there next weekend. I think I bring entertainment to the fight game and a new face in the UFC. I can’t wait to be on a ton of UFC cards, and have a great 2013.”