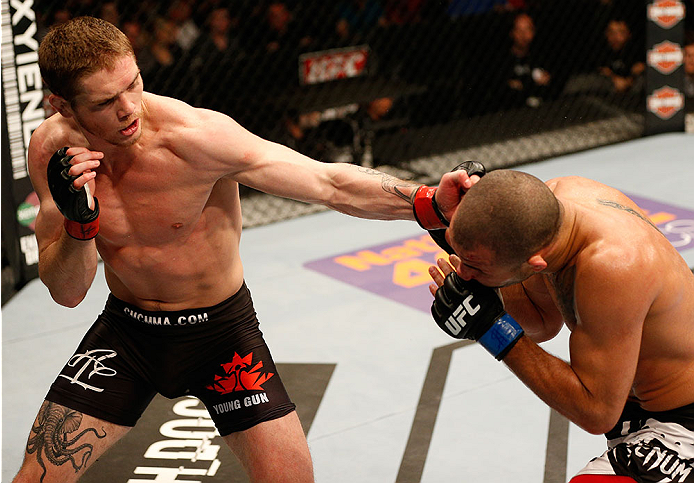 The temptation to look ahead and think about where you’ll end up depending on how the dominoes fall exists for every fighter who steps into the Octagon.

With a new rankings update generated almost every week and myriad websites projecting different permutations for how divisions will shake out over the next six months, it’s easy for a fighter to develop a case of “if I win this one”-itis. All it takes is a quick glance at the upcoming schedule and a breakdown of the fights in your division and next thing you know you’ve figured out how – if everything breaks in your favor – you’re two wins away from cracking the Top 10 or challenging for UFC gold.

In the weeks leading up to a fight, most will tell you that they’re not looking past their scheduled opponent and haven’t thought about what comes next, but when they’re standing in the cage victorious talking to Joe Rogan, Dan Hardy or Jon Anik, most are acutely aware of where they stand within the division and what it’s going to take in order to get ahead. By the time they reach the post-fight press conference, they just so happen to have a doctoral thesis on why a matchup with Fighter A makes perfect sense ready to present.

When it comes to that process, Jordan Mein is an outlier – one of the few fighters who says he’s not thinking about anything but the fight at hand and genuinely means it.

Having started his career at the tender age of 16 with a loss to another “can’t wait to get started” Canadian, Rory MacDonald, the Lethbridge, Alberta native fought 31 times before his 21st birthday. He shuttled all over Canada, taking fights in an alphabet soup of organizations – RITC, UCW, EFC, TKO and LGIO MMA – before a five-fight winning streak that included victories over current UFC welterweights Joe Riggs and Josh Burkman earned him a place on the Strikeforce roster.

“I’m thinking of it more as beating him for who he is; not really thinking about what’s after this fight,” he told me prior to stepping into the cage against Evangelista “Cyborg” Santos for his debut with the organization. “I know how hard a fight it’s going to be, and how much he’s going to challenge and test me, so I’m focused on just beating him. I’ve been putting my mind more towards that, rather than what he’s done and what my future holds in Strikeforce.”

Three-plus years later and preparing to step into the Octagon against former title challenger Thiago Alves in the opening bout of this weekend’s main card, his mindset about the task at hand and what comes next hasn’t changed.

“I saw Gleison Tibau when he was walking back from the cage yelling that it was his third win (in a row) as if that automatically means a title shot or something,” the now 25-year-old Mein, who carries a 29-9 record into Saturday’s showdown with Alves. offers. “There’s plenty of guys that put together five-fight, six-fight winning streaks and don’t really get anywhere with it and then they get hit with a loss. It’s more about if the fans like you and you’re doing things right. It’s about how entertaining you are and how many people want to watch you fight.”

Through four appearances, the welterweight talent has given UFC fans plenty of reasons to want to watch him fight.

Mein debuted with an impressive first-round stoppage win over veteran Dan Miller at UFC 158 in Montreal before jumping right back into the Octagon a month later against Matt Brown. Though the bout lasted just six minutes, it was a certified slobberknocker that saw both men dole out some serious punishment and take home Fight of the Night honors.

Unfortunately for the Canadian, he also came away from the donnybrook with broken orbital and nasal bones, the first serious injuries of his career. As he started down the road back to the cage, he tore the MCL and meniscus in one of his knees. After never going longer than seven months between fights through his first 36 fights, Mein was sidelined for a day shy of one calendar year.

He returned to action with a tepid decision win over Hernani Perpetuo, showing improved footwork and defensive skills, but failing to deliver the kind of offensive flurries that have quickly become his calling card. Four months later, however, Mein returned to his aggressive, finishing ways, picking up a Performance of the Night bonus for his 72-second stoppage win over Mike Pyle.

“I’m not thinking about putting together wins, going on a streak or not losing – I’m there to collect bonuses because that’s where the money is,” Mein admits. “Obviously I want to string together as many wins as I can – that’s always the goal, to keep winning and never lose – but I’m more focused on always getting that bonus. I got to do that in my last fight and that was pretty awesome and I want to do that again.”

He should get that opportunity Saturday night with Alves, who returned to action after four surgeries and more than two years on the sidelines on the same April UFC on FOX card as Mein in Orlando, picking up a unanimous decision over Seth Baczynski for his first win since November 2011.

Originally matched up last August, Alves was scratched from the contest after suffering a knee injury, leading to a string of changes that ended with Mein putting Pyle to sleep in the co-main event.

He knows he’s in tough against the Brazilian striker, but just as he keeps his focus on only the fight at hand, Mein also likes to keep things pretty free-form on the strategy front, paying more attention to his own preparation and not what his opponent may or may not do.

“Thiago is always dangerous,” he offers in assessment of the man he’ll face on Saturday night. “(He) always has a strong overhand right, good head movement and solid leg kicks, so I’ll be looking out for those, but that’s as far as the game plan goes. I’m just trying to really hurt Thiago.

“Every guy I fight, I’m trying to do damage and put on an entertaining fight. (I want fans to) know that when I’m on the card, it’s going to be an exciting fight. That’s really all I’m thinking about.”