Jordan Mein: Back for More

"I’m just trying to stay focused, stick to the training and what got
me here, take things in stride, get in there, and enjoy the experience." - Jordan Mein 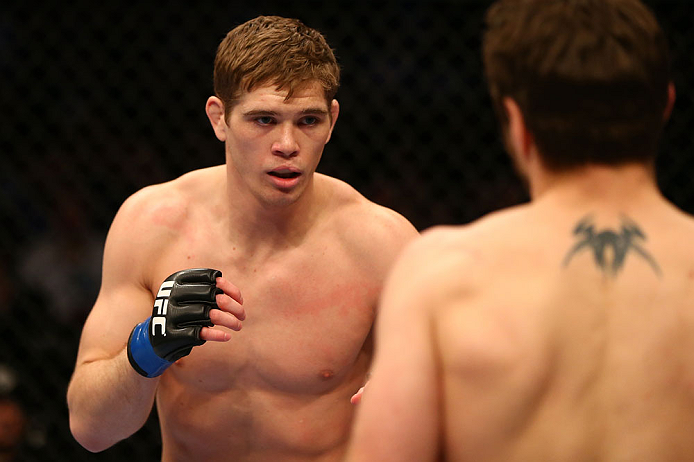 On Monday, March 18, Jordan Mein was in the gym training.

Considering that he’s a professional fighter that competes in the UFC’s welterweight division, the fact that he was hitting the heavy bag and getting some time in on the mats on a Monday afternoon seems normal enough. What makes that particular entry from the 23-year-old Lethbridge, Alberta native’s daily activity log a little more interesting is that two nights earlier, the Canadian Martial Arts Centre product was standing inside the Octagon in Montreal, earning his first win on the sport’s biggest stage in spectacular fashion.

At UFC 158, Mein became the first person to finish veteran Dan Miller, earning a stoppage win over the Whippany, New Jersey resident with just 18 seconds remaining the first round. As impressive as the finishing sequence was, it almost never happened, as Miller caught Mein in an armbar early on in the round, forcing his young, but experienced, opponent to find an escape.

“I wasn’t really thinking when the armbar came on; I was just kind of reacting,” admits Mein with a laugh while soaking in the sun on a weekday afternoon not too long after the bout. “Then once I watched the fight after, I realized how tight the armbar was. It kind of set in afterwards; my elbow was kind of stiff for two or three days.”

After getting free of the nearly-finished submission attempt, Mein went on the offensive, dropping Miller with a straight left down the pipe midway through the frame. A few minutes later, the referee was stepping in to wave off the fight, the serious look on Mein’s face replaced with one of satisfaction and excitement.

“I was super-happy; I had so much fun out there,” says Mein, who pushed his professional record to a 27-8 with the victory. “It was exhilarating – not just the fight, but the whole event.

“Weigh ins were pretty exciting; Montreal has some crazy fans, and they had that place packed for weigh ins. Once that was over with, I got the fun part started the next day when I got to fight. Stepping into the Octagon in front of that many people screaming and freaking out was a great experience, and I’m really glad I got to do it.

“The nerves were still there – you’ve still got to deal with the nerves and the pressure and whatnot – but that’s also why it’s such a high to win because you’re overcoming all those things,” he adds. “Fighting in Montreal, I’ve been there plenty, and it’s kind of a second home as far as fights go, so it was a big advantage get my first win in Canada, and have lots of friends and family there. That was a big bonus. It’s really exciting to me that I can entertain all my friends and family that are in the building that are freaking out when I get stuck in an armbar, and then they’re jumping up and going crazy when I win. That means a lot to me.”

Mein’s career started with a loss to fellow Canadian UFC welterweight contender Rory MacDonald when the two were still teenagers, and in the six-plus years since, he’s added another 34 fights to his resume. He cut his teeth trekking across Canada, fighting in smaller shows, gaining as much experience as he could, often competing in consecutive months.

Now that he’s made it to the UFC, the seasoned veteran who still barely has to shave more than twice a week isn’t changing his approach. Less than a week after dispatching Miller, the UFC tabbed Mein to replace Dan Hardy in the opening bout of this weekend’s UFC on FOX fight card in San Jose, California.

“I think it was (on the) Thursday that my dad asked me if I wanted to do it, and I said, `Yeah, definitely.’ I was healthy, and I got right back to training (that) Monday, so I figured why not? Let’s keep rolling. I’m feeling great, and I want to go through it again; it was a super-good time.

“Matt Brown is another hard opponent; he’s super-tough, and I think my style matches up well with his. I think I can do really well against him. I figured I was healthy, and saw this as a great opportunity. I think I can get another win and start my year off with a bang.”

Young, emerging talents usually have to work their way to a place on a nationally televised broadcast opposite a surging veteran, but Mein happened to be in the right place at the right time. Coming off a thoroughly impressive performance against Miller certainly didn’t hurt either.

Rather than have to slug it out and stack victories against lesser known opponents on the preliminary portion of a series of events, the Canadian up-and-comer has the chance to make an instant impact in the deep welterweight division, and he’s intent on making the most of it this weekend at “The Shark Tank” in San Jose.

“(To start my UFC career with consecutive wins) against two guys who have been in the UFC for a long time and have established names is important,” says Mein, who has gone 18-3 over his last 21 fights. “They’re not just guys that no one has ever heard of before.

“Matt Brown is an Ultimate Fighter guy; he’s been around for a long time, and he always has super-entertaining fights. He’s on a four-fight win streak and is coming off a knockout of Mike Swick on FOX, so people are aware of what he’s doing, and I think putting myself in that situation is really going to help my career.”

Mein is well aware of what his upcoming opponent has been doing as well. In fact, the diligent second-generation fighter has been familiarizing himself with everyone in the welterweight division from the time he found out he’d be joining them on the UFC roster.

“When I signed with the UFC, I wrote down every single welterweight in the UFC so I can just look at their names, and have them in my mind,” says Mein of the white board containing information on every 170-pound fighter in the organization.

“If I want to study them, go and watch tape on them, look-up who they fought, I have their names on hand. Once I get contracts, I go to the list, I look at their name, and I just think about how the fight is going to play out. It’s there for me every morning when I wake up, and every night before I go to bed so I can get focused and stay focused.”

Though he’s still only 23, Mein also has an outlook on the sport and understanding of the bigger picture that belies his age. Two years ago, he was fighting for his father Lee’s promotion, Rumble in the Cage, in his hometown of Lethbridge, working towards making his dream of fighting in the UFC a reality.

Now that he’s here, the talented young Canadian isn’t going to get wrapped up in the moment, let down his guard, or forget that it could all be taken away in an instant.

“(Reaching this level) means a lot. This been my dream since the beginning of my mixed martial arts career. Now I’m just trying to stay focused, stick to the training and what got me here, take things in stride, get in there, and enjoy the experience.

“With how good I feel about this last win, it can just as easily be taken away with a loss to Matt Brown, and I’m aware of that. That’s the sport, and that’s the way it is, so you can’t hold on to your wins. You want to be proud of yourself and happy, but for me it’s another challenge against a really, really tough dude, and I think I’ll be just as happy – if not happier – after this next win.”

And getting that “next win” is exactly what he plans to do on Saturday night.

“I think my style matches up well with his. I think I can do really well against him. I expect it to be a crazy fight because every fight that he has is super-exciting. He’s a gritty guy; he just keeps moving forward, and he hurts people, so I’m expecting a hard fight.