Jordan Mein: Back to the Grind

"It’s going to be exciting when I get back in there and have all the fans screaming. Having that experience again will be nice." - Jordan Mein 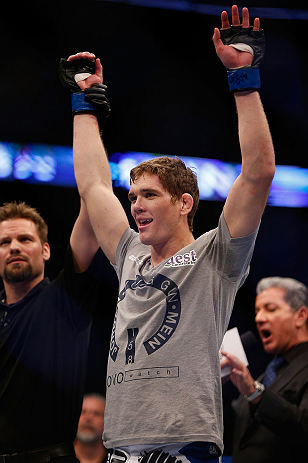 You couldn’t fault Jordan Mein if he were going a little stir crazy.

Over the course of his nearly eight-year career, the 24-year-old Lethbridge, Alberta native has never gone more than seven months between fights.

By the time he steps back into the Octagon later this month in Orlando, 364 days will have passed since his last bout, a second-round technical knockout loss to surging veteran Matt Brown that earned Fight of the Night honors despite it lasting only six minutes.

It was his second UFC appearance in five weeks, having earned a first-round victory over Dan Miller in his organizational debut the previous month.

Given how active the 27-9 welterweight has been thus far, it would be wholly understandable if a year on the sidelines had him champing at the bit for his April 19 return against Hernani Perpetuo to hurry up and get here.

“Not really - not yet because I’ve still got some training to get through, so I kind of focus on that more and try to stay healthy,” admits Mein. “Once I get to Florida and I get that hot weather - get some sun on me - maybe then I’ll get excited, but being this cold all the time and training this hard…”

He starts to laugh before he can finish the sentence, knowing anyone that has lived in frosty, snow-covered locations understands how difficult it can be to get excited for anything when each day is gray and dark and capable of chilling you to your core.

But it’s not just the Hoth-like conditions of his hometown that have him even-keeled a couple weeks before ending the longest layoff of his career. That’s simply the way Mein approaches things - never getting too high with the highs and never getting too low with the lows.

It’s a mindset forged by starting young and being allowed to experience setbacks on the way to making it to the biggest stage in the sport.

Mein lost the first professional bout of his career, getting submitted in the opening round by another 18-year-old Canadian, Rory MacDonald, on one of his father Lee’s Rumble in the Cage events at home in Lethbridge.

Eight fights into his career, the second-generation fighter was 4-4, alternating wins and losses after rebounding for his setback against MacDonald with two straight victories. He’d only lose three more times over the next three years, amassing 14 victories along the way.

Two of those losses came against future UFC competitors, Mike Ricci and Jason High - the former heralded at the time as the next great fighter from Montreal’s Tristar Gym, the latter having already enjoyed a cup of coffee in the big leagues.

Where losses can be soul crushing for some fighters, Mein was forced to deal with it early in his career and early in life, and it equipped him to handle subsequent setbacks with aplomb, including last year’s loss to Brown.

“I mean, you don’t want to take too many of those learning experiences, obviously,” he says with a laugh, “but tthe only way I can look at it is in a positive sense because if I just dwell on getting my ass kicked over and over again, it probably won’t get me very far.

“It’s a journey, and not getting too hung up on wins and losses (is crucial). I mean, it sure is nice to win and it sure sucks to lose, but they all pass. Everything passes, so it’s just getting through it all and enjoying myself - that’s what I’m trying to do, rather than hang on to it all.

“I obviously love winning and it’s one of the greatest feelings in the world - and losing is one of the worst feelings - but there are ups and downs, and just riding it and accepting both is what I’ve done.”

He’s also made the most of his time away.

Mein suffered a broken orbital in his bout with Brown, which accounts for the first six months of his nearly 12-month absence. As he was slowly working his way back into shape in the gym, he tore the MCL and meniscus in one of his knees.

“That was another few months,” says Mein, who had remained surprisingly healthy despite his hectic schedule prior to his recent injuries.

As much as being sidelined for so long was a change for the emerging welterweight prospect, it was also an opportunity to step back and slow things down, while focusing on technique and hitting the road to do some training, including a stop in St. Louis with a former opponent.

“(Tyron) treated me awesome down there in St. Louis at his gym, ATT Evolution,” Mein says of the trip he took to work with surging contender Tyron Woodley.

The two previously fought under the Strikeforce banner, with Woodley coming away with a split decision win and a ton of respect for his Canadian counterpart.

“He asked if I wanted to come down and I jumped on that opportunity. I had a great time - Din Thomas was down there as well and he was helping me out, giving me some game plans. The whole experience was awesome. Getting round after round with Tyron was great.

“I’ve noticed huge (gains) in my technique the last year - training with different guys and seeing my improvement - and then in my body, from having the layoff and not having to cut weight, I’ve actually gained a bit of weight.

“It’s been kind of nice having the time off. Mentally and physically, it has been a good thing - minus the injuries.

“I’m still sparring hard,” he adds, “so I think my timing is still there - I don’t think that will be a factor. But it’s going to be exciting when I get back in there and have all the fans screaming. Having that experience again will be nice.”

The wait is almost over.

Originally slated to face TUF Brazil season two standout Santiago Ponzinibbio, Mein will instead welcome 17-3 Nova Unaio product Hernani Perpetuo to the UFC as part of the preliminary card for the UFC on FOX event at Amway Center in Orlando.

The switch in opponents came just three weeks after the bout with Ponzinibbio was announced, giving Mein plenty of time to prepare for the UFC newcomer Perpetuo.

“It wasn’t much of a change because they’re both pretty aggressive,” offers Mein on the shift in opponents. “They both come hard with their strikes. Ponzinibbio went for more takedowns though. Hernani throws that right overhand a lot, so just mixing it up lots is going to be the key to beating him - not being one dimensional, not trying to box the guy always.”

But Mein isn’t just interested in beating Perpetuo, just as he’s never been the type to do whatever it takes to earn a victory inside the cage.

He understands the entertainment aspect of this sport and has from the very beginning, and that has helped shape his fighting style.

Mein rarely takes a backwards step, preferring instead to wade into the fray and put on a show for the people in the stands. It was that way when he was fighting in small venues loaded with locals across The Prairies and has remained that way through his time in Strikeforce and into the UFC.

And it will be the same on Saturday, April 19 in Orlando, when “Young Gun” looks re-insert himself into the welterweight title chase and start making up for lost time.

“As long as I get a good win - an impressive win - I think I can pop back in there,” he says of the divisional chase. “I have a style that people want to see, so it depends on the wins and how impressive you are. As long as I’m putting on those performances, I don’t see why not.

“And I think getting right back into it would be preferred, as long as I’m healthy and everything is feeling good,” adds Mein. “I don’t see a point in sitting around and not really getting back into it.”

After a year away, fight fans don’t want to see him on the sidelines for too long either.