Becoming more confident after winning his debut, 'The Monkey King' is ready for his next challenge this Saturday
By Thomas Gerbasi, on Twitter: @TGerbasi • Apr. 13, 2022

You don’t need to visit Jordan Leavitt’s reading vlog on YouTube to know that he’s not like most of his peers in the fight game.

But if you want to get some more insight on how the lightweight prospect differs from most in his position, realize that up until his recent submission win over Matt Sayles last December, he wasn’t truly convinced that he belonged…not just in the UFC, but in fighting.

“The fighter's journey is crazy, especially when you're undefeated in the amateurs, then you go pro and you make it to the UFC,” Leavitt explains. “It's like, ‘Am I really a fighter, though?’ Fighters have the ups and the downs and the overcoming, and I never really had that. So when I lost (to Claudio Puelles last June), I'm like, ‘Well, time to prove if I'm a fighter or not.’ And even after my debut, it was a highlight reel knockout and, in my head, I kept telling myself, 'Congratulations, you're a one-hit wonder.' If I would have stopped my career then, nothing would have ever mattered. I would have just been all this potential that never reached anything, and then I lost, so I'm like, is that gonna be the ending of my story? And when I got in there for my last fight, I felt very comfortable. It was a rough camp, lots of injuries, and I went out there and was still able to perform, and I was like, yeah, I'm a fighter.”

Maybe he needed the validation of his second UFC victory (and finish) to reach that conclusion, but everyone looking from the outside knew he’s been the genuine article for a long time, whether he was building an unbeaten record on the regional scene, submitting Jose Flores on Dana White’s Contender Series to earn a UFC contract, or slamming Matt Wiman into defeat in 22 seconds in his Octagon debut. But maybe, just maybe, the 26-year-old overthinks things a little bit.

“I definitely think I overthink it,” he laughs. “And I do think for the longest time I needed to overthink it. It's a crazy thing that we do, day in and day out, especially that I have a lot of other avenues to pursue, and I still can pursue those things. So, for me, I really had to convince myself, okay, maybe you don't belong here, but you're still able to do these things, and try to reconcile all those conflicting emotions and feelings.

“There was just a lot of fear,” Leavitt continues. “If you reach too far and you fail, everyone will know that you're a failure because you're trying something that maybe didn't have guaranteed success or a guaranteed positive outcome. So I felt like a lot of the time I was just fighting myself about being a fighter and was always trying to talk myself out of it. And one thing my teammate taught me a few fights ago, he said, ‘Don't listen to yourself but you can always talk to yourself. If you listen to yourself, you're always gonna hear the negative, but if you talk to yourself you can choose what you're gonna put out there into your mind.’ That definitely made me see myself more as a fighter, and even if I don't feel like I fit in all the time, I'm doing better at being like a niche part of the community, and there's a sense of belonging now.”

Bouncing back from the first loss of his career to defeat Sayles in impressive fashion didn’t hurt either, and now he’ll look to make it 3-1 in the big show this weekend when he faces short-notice UFC newcomer Trey Ogden. On paper, it’s an intriguing clash of ground fighters, and that’s right up Leavitt’s alley, even if he did have to adjust to the opponent switch from Victor Martinez to Ogden. But that’s part of the fighter’s life, and remember, Leavitt’s a fighter, one who plans to stick around for a while. 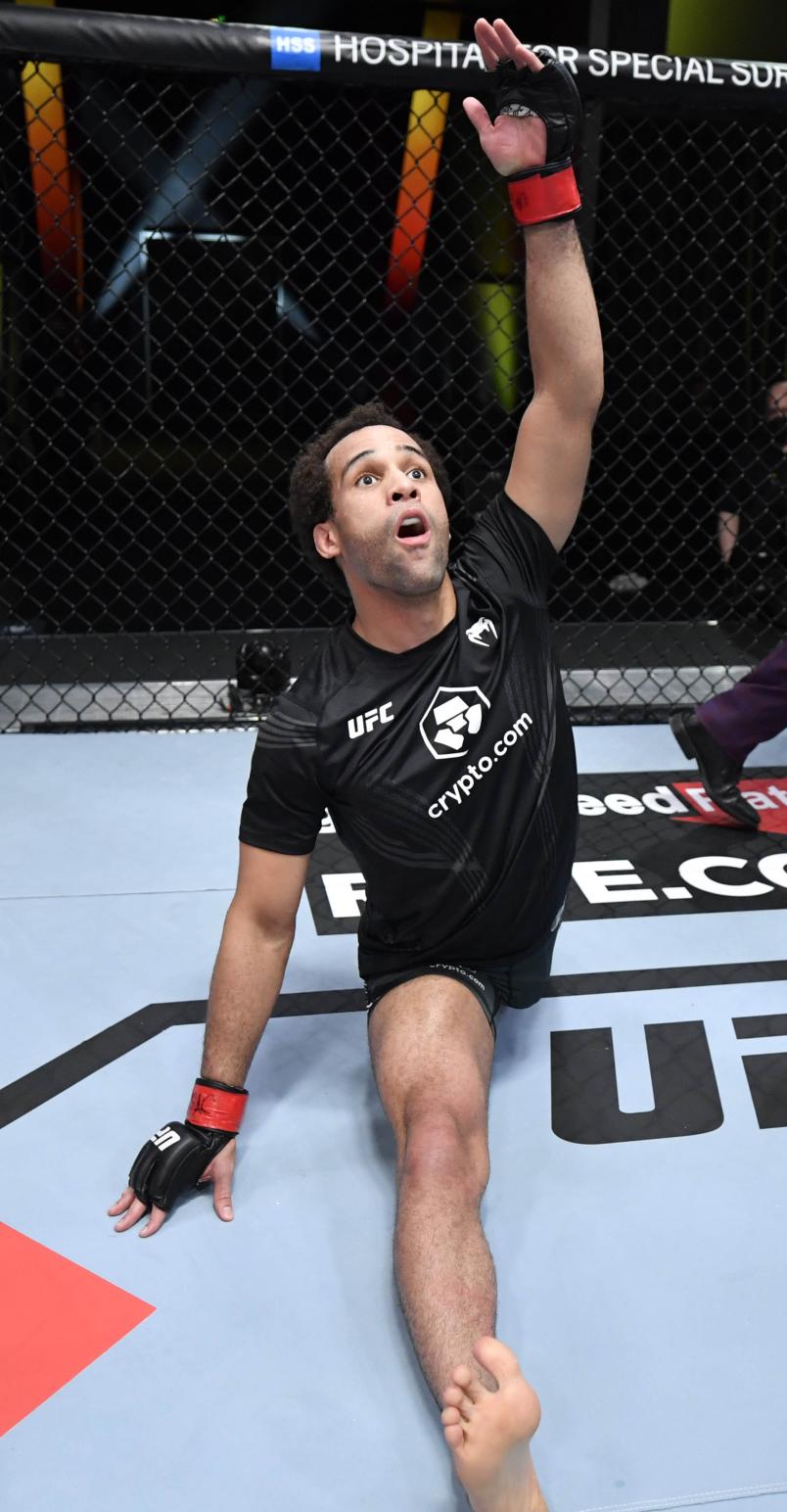 Jordan Leavitt celebrates after his victory over Matt Sayles in their lightweight fight during the UFC Fight Night event at UFC APEX on December 18, 2021 in Las Vegas, Nevada. (Photo by Jeff Bottari/Zuffa LLC)

“When I'm around my family I don't want to say that,” he laughs. “But if it's me and my wife or I'm around my friends that supported me the entire way, I'm like, I'm in here for ten years at least. I'm only 26; I can do this when I'm 36, I can do this when I'm 40. I definitely see me being involved in it for the long haul. I have so much passion for it and I'm finally not really ashamed of that passion anymore. The hardest part for me being a part of this sport was all the negative emotions that I was putting into it. All the fear and insecurity, and now that I'm trying to throw that away, all I have is love and passion for the sport, and I enjoy it so much. I feel like it's made me a better person and helped me grow up and to see the world a different way. It's the lens I'm gonna see my life through the rest of my life. It's an experience that's so unique, and very few people are ever going to be able to understand it from my perspective, and it's really scary, but also inspiring, to have no roadmap to follow.”

That inspiring journey is a personal one for the 26-year-old, but since it’s happening on the biggest stage in mixed martial arts for the world to see, he’s not the only one affected by it.

“At first it made me uncomfortable, almost,” he said. “I never saw myself as a person to look up to, but if you're not living your life to inspire somebody, you're not doing it right. But then when people would message me, like, 'Dude, I really resonated with your message and your story,' and then they tell me something very intimate about their lives, I was never in a million years prepared for that. At first, I felt it was like an emotional burden, like now I'm going to let all these people down. But now it feels empowering for me. And they're supporting me for me, not just because of my victories or the victory dances. They're here because of me and inspired by me and not by the actions, and that's empowering and something really special. I never thought I would be that type of person.”

Who knows, Leavitt may even inspire the social media generation to start reading.

“There's something about reading that's so much better, so much deeper,” he said. “I can watch the same TV show a dozen times, and it's the same TV show. When I read a book and I come back to that book five, six, seven years later, I can have a totally different experience. Some things can't do that; books are the only way to live another life.”

That’s a good way to put it, especially in Leavitt’s case, because while he’s reached the pinnacle of his profession as a UFC fighter, there’s a distinct feeling that when he hangs up the gloves, that won’t be the last we hear of him. He agrees, and whether he writes the Great American Novel or not, this story will continue long after the final bell.

“Life's all about finding the conflict, then overcoming that conflict or failing and then trying again the next time,” Leavitt said. “And I've always been such a passionate person that fighting is just the biggest challenge for me right now. Everything else I was studying in school, everything else I was working on, it just didn't capture my attention and my energy and my passion. I really and truly believe that when you lead your life with passion, you're always going to be given things that are going to interest you, you're always going to get things that are going to be the new next best thing for you, and I feel fighting's the great challenge of my life right now, but I just can't wait for the next chapter. I'm gonna enjoy this chapter, but I'm so excited to see where my journey goes. I think when I look back on my life, fighting is just gonna be one of the things I'm very proud of.”