Although his UFC career got off to a bumpy start, Jordan Griffin believes he's ready to take the division by storm.
By E. Spencer Kyte, on Twitter @spencerkyte • Jun. 8, 2020

There is a line in the John Steinbeck classic East of Eden that feels like it should become the mantra for more people and one that has a particular place in the world of mixed martial arts.

“And now that you don’t have to be perfect, you can be good,” he wrote in the 1952 tale about the Hamiltons and the Trasks and the Salinas Valley, and nearly 70 years later, people continue to struggle to find a place between those two poles where they can feel at comfortable and secure.

UFC featherweight Jordan Griffin is one of those people. 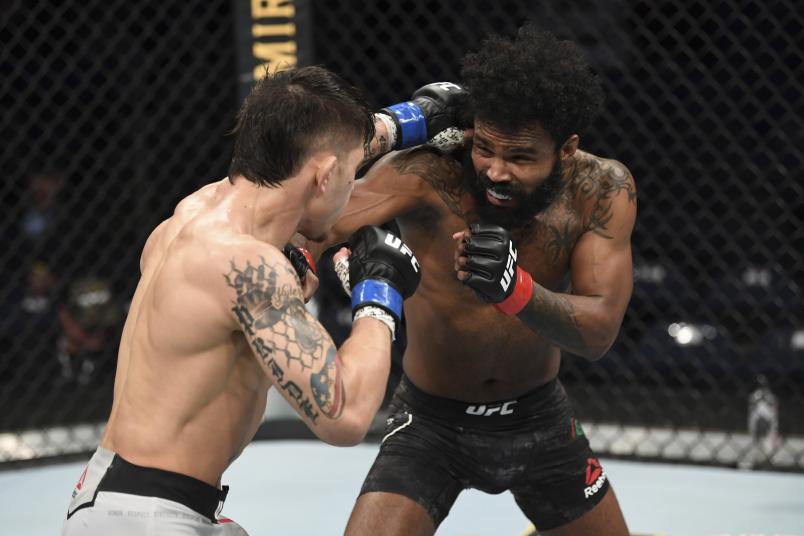 After earning his contract with a come-from-behind first-round stoppage win on Season 2 of the Contender Series, the longtime Roufusport representative landed on the wrong side of consecutive unanimous decision verdicts in each of his first two trips into the Octagon. There were positive moments in each contest, but too often, the hard-nosed finisher found himself accepting bad positions and letting his opponents dictate the terms of engagement, leading to time ticking off the clock and rounds getting away from him.

But earlier this year, with his back against the wall, the 30-year-old walked out of the Octagon with his first UFC victory, a second-round submission victory over newcomer TJ Brown.

“I needed to stop worrying about being perfect and I needed to go out there and just be me,” said Griffin, who returns to action this weekend against Darrick Minner in a rematch of their battle at LFA 34, which Griffin won by second-round submission.

“I had to open my mind up and realize that I’m a dangerous f****** dude,” continued Griffin, whose initial setbacks came against current Top 10 featherweight Dan Ige and veteran stalwart Chas Skelly. “I wasn’t the dude with one loss or zero losses — I’m the dude that was 1-3 and went on a winning streak, built up my confidence fighting tougher dudes. I was the guy that was chasing the dudes with the big records because I wanted to beat them, and I feel like I’ve found that guy again.

“I think maybe I had the jitters those first two fights in the UFC and I came into that third fight with a different kind of confidence, knowing that I belong here.”

Every fighter on the regional circuit says they’re good enough to be in the UFC, with many voicing their unwavering belief that if given a chance, they would rocket to the top of their respective division. Maintaining that confidence and translating it into success upon reaching the biggest stage in the sport is another thing entirely, and something countless newcomers struggle with out of the gate.

The challenge to find his footing and fully believe he was capable of competing at the highest level runs a little deeper for Griffin, as his journey to the Octagon took a little longer and featured a few more detours than many of his contemporaries.

He started his career with a 1-3 record, the kind of beginning that makes you question if this is really what you want to do with your life. He had to build from there, and every time it seemed like he was ready to take the next step forward, another fighter with big league aspirations would halt his momentum.

Along the way, Griffin worked multiple jobs and couch surfed at times, trying to find a way to balance being a father and making ends meet with training and chasing his UFC dreams. A championship run under the King of the Cage banner ended with a loss to multi-division champion Juan Archuleta that put more distance between Griffin and the sport’s highest level, but he remained undeterred, continued testing himself against tough opposition, and eventually snatched his opportunity by snatching the neck of Maurice Mitchell late in the opening round of their entertaining clash on the Contender Series.

“I think I’ve been in a lot of hard situations in my life, inside and outside of the cage,” said Griffin, who credits facing tough competition throughout his career with helping him deal with adversity and sharpen his focus after starting his UFC career with consecutive losses. He also recalibrated how he looks at the challenges life inevitably doles out.

“Once I was able to accept that and take that in, acknowledge that I had a hand in all of it, I was able to adjust things and help myself and the people around me with a clear mind.”

And it’s with that clear mind and firm belief that he belongs amongst the best featherweight fighters in the world that he approaches this weekend’s rematch with Minner.

Despite having already shared the cage with the experienced Nebraska native and emerging with a finish, Griffin is viewing Saturday night’s preliminary card pairing as an entirely new experience, even if he is forecasting a similar result.

“I’m not going to overlook Darrick at all,” he said of Minner, who was submitted by Grant Dawson in his promotional debut the same night Griffin finished Brown in Norfolk, Virginia. “I’m going to treat him like everybody else; I’m going to try to rip his head off and he knows that.

For Griffin, it all gets back to the mistakes he made against Ige and Skelly, and the adjustments he made heading into his last fight.

“I accepted those takedowns and I let them be more dominant, and that’s something I really had to change was to stop letting people do things to me,” he said, reflecting on what went wrong in his first two outings. “If I can shut down the takedowns, shut down him trying to be dominant with me at first, I know I’m going to walk away with that win.

“Every time he hits the big show, he loses. He can’t handle the pressure,” he added.

Griffin knows he can and proved it to himself last time out.

Now that he’s done trying to be perfect and focused on a being himself inside the cage, he’s ready to go on a run, starting this weekend.

“I think I’m going to finish him in the late second or early third, and I’m going to say head kick,” Griffin said, offering a prediction for how his rematch with Minner will play out. “Ultimately, I want to just go in there, finish this fight, and come back in 30 days and pump another one out.

“I feel like this is the time where if I’m healthy, I want to fight as much as I can, and if fate allows me to do that, I’m going to do it.”