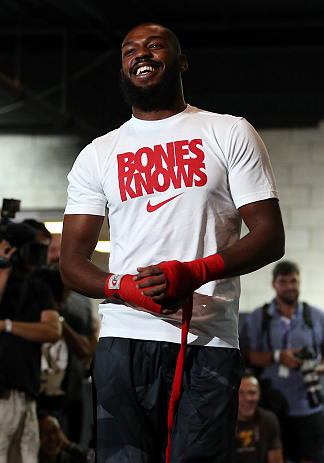 For someone who’s supposedly so cocky, Jon Jones sure uses the word “great” a lot when referring to every fighter but himself. Not that anyone ridiculing the UFC light heavyweight champion would notice that. It is the price you pay for being young, talented, and on top of the world though, and the 25-year-old “Jonny Bones” has gotten a crash course in backlash in the days and weeks leading up to his Saturday title defense against Vitor Belfort.

And strangely enough, it’s almost as if he saw it coming. Days before Dan Henderson pulled out of his UFC 151 bout against Jones on September 1st in Las Vegas, I asked the New Yorker what he’s learned about human nature since he became the youngest champion in UFC history. He thought about it for a second before saying, “I’ve been trying to have skin like an armadillo and not really get bent out of shape from complete strangers’ opinions.”

Hopefully that skin came in handy when he turned down a fight with a proposed replacement foe, Chael Sonnen, prompting the UFC to cancel the Las Vegas event and move Jones to this Saturday’s UFC 152 card in Toronto to face Vitor Belfort. From the moment that decision was announced, Jones became the target of ire for everyone from fans to his own fighting peers. Now, with things finally calming down as the Toronto event approaches, it’s almost like a normal fight week, which is a good thing. But while it’s common knowledge that coach Greg Jackson suggested that the champion turn down the Sonnen fight, did Jones’ ego initially pull him in a different direction?

“Originally, my ego was right out front,” he said. “I talked to my wrestling coach, my boxing coach, my kickboxing coach, and right away, the initial reactions were ‘all right, we’ve got a major job on our hands, but we can do it. We trust in you, we know that you can do it.’ And then when I talked to Greg, he came with a little more wisdom than just ‘fight first.’ He thought, ‘well, Jon, you really haven’t prepared, and I know you can win, but you’re here to dominate. We’re here to leave with no casualties.’ He came to me with that approach. He told me to not let my pride and my ego possibly get me in a sticky situation. He said go back to your drawing board, study, rehearse, and beat him up in three weeks.”

The UFC didn’t give Sonnen to Jones though. Instead, it was a former light heavyweight champion and MMA pioneer, Belfort, who got the call. Did Jones get flustered? Not in the slightest. Instead, he focused on adding another champion to his list of victims, continuing to build his legacy in the process.

“My emphasis goes more towards being associated with someone of his greatness and stealing some of that and having that under my belt and knowing that I beat a guy who knocked out Wanderlei (Silva), who knocked out Rich Franklin and the Who’s Who, and knowing that I was able to beat a guy who absolutely demolishes other guys. I feel like when you beat people who are so great, you kinda steal some of their accolades, and that’s what I want to do.”

Jones’ accolades are growing with each passing fight. After winning his title in March 2011 with a stoppage of Mauricio “Shogun” Rua, he successfully defended his belt against three more former champs in “Rampage” Jackson, Lyoto Machida, and Rashad Evans. That kind of a run was unprecedented in the annals of UFC history, but it seemed like all anyone wanted to do was nitpick at anything he wanted to say or do. Yes, he deserved all the criticism he got for a DUI in May, but when it comes to everything else, Jones’ Tweets have gotten the MMA equivalent of scrutiny that Obama and Romney get in the political world. It would be almost laughable, if only it didn’t get ugly and very personal at times.

“Sometimes I contemplate ending social media altogether,” Jones admits. “It’s tough, but it’s part of the world we live in nowadays, and I accept it with the job. They know all your tattoos, they know how many kids you’ve got, they know what you eat, when you sleep, and they know everything about you nowadays.”

It’s been a harsh lesson about life in the spotlight for the latest Nike endorsee, but he remains focused on his main goal: to dominate. He doesn’t want to engage in back-and-forth wars and win by a point on the judges’ scorecards; no, Jones wants to knock people out in 30 seconds, put them to sleep with submissions, and win shutout decisions. If he was a football player in the NFL like his brothers Arthur and Chandler, he wouldn’t eke out overtime wins; he’d be winning 45-0.

“I would like to blow through everybody,” he said. “That way I can have a good head on my shoulders and not have any post-career brain issues. I’m here to entertain the fans, and I would love to be a dominant champion that goes out there and gets it over with quick. I think drawn out wars are inevitable, and I think that’s what will happen in my career once I’ve been doing it for a long time and taking more punishment. But as of now, I’d like to keep my brain and body as fresh as possible and take them all out fast.”

But how much motivation can there possibly be if he blasts out Belfort, making it five champs up, five champs down? Could he be a Jim Brown or Rocky Marciano, leaving at the top of the game as a young man without suffering the ravages of old age 99% of athletes eventually succumb to? He chuckles at such a suggestion.

“Not at all. My goal is to leave a legacy of just pure dominance and walking away early would be silly, especially with today’s economy. My job is to really try and secure a future. You never know how life can go wrong, and just because we’re successful today doesn’t mean we’ll be successful forever, so I won’t leave this sport until I’m absolutely positive that I’ll never have to work again.”

“Many things keep me motivated,” he said. “Goal setting keeps me motivated. Guys like Anderson Silva’s record, Tito Ortiz’ record, those things keep me motivated. The fear of being embarrassed on national TV, that keeps me motivated, and I guess one of my biggest motivators are all my doubters. I’m absolutely positive that you shouldn’t fight out of trying to prove people wrong; you should fight out of the love, but I struggle with that. I really do love the sport, but I really do love proving people wrong.”

That may also be Belfort’s motivation this weekend, because despite being a sizeable underdog, he does have the dynamite in his hands to score the upset. And if the world isn’t giving “The Phenom” a chance, just asking Jones about his first impressions of the Brazilian will make it clear that he is taking his challenger seriously.

“I remember watching highlight videos of that legendary Wanderlei Silva knockout when he (Belfort) just came rushing in with those punches,” said Jones. “Now that I’m an experienced martial artist, you look back at that and you’re just like ‘man, what is the defense to something like that?’ Just rights and lefts with equal power and crazy speed, it’s an iconic moment of sheer dominance in our sport’s history that will never go away.”

But beyond Belfort, Jones believes that while he’s beating some of the game’s biggest names, his biggest challenges may come from the next generation of contenders, like fellow young guns Alex Gustafsson and Phil Davis.

“What I think could be happening is, I might be beating some of the guys that are great and always will be great, but maybe just a little bit past their time. And possibly, some of the toughest matchups of my career will be when I start fighting the guys who are my age, these new guys who are new to the sport just like me and have ambition just like me and a new excitement and appreciation for their job. Maybe those will be my hardest matchups. Right now I’m fighting guys who are always going to be great but they might be a little past their time and they’re catching me right in my prime.”

It’s as honest an answer as you will get, but surely someone will find something wrong with it. That’s life these days as Jon “Bones” Jones, but when it comes down to it, he’s not about to let any negative talk get him down. Especially not on fight night.